I love it!! I look forward to seeing more. Poke me when you get commission room. >.>
Nathan Goldenmane - Mercybringer of Ilmater

Your an absolute talent!
Kejmckin:

Dolan Ironfaar: "You can learn most anything from reading a book"
Dral Winterward: "Loyal"
Top

wangxiuming wrote: ↑Thu Jan 21, 2021 1:21 am It's been forever since I've done anything but I seem to always experience a burst of creativity in the beginning of the year. Here's Barristan as the Hierophant! 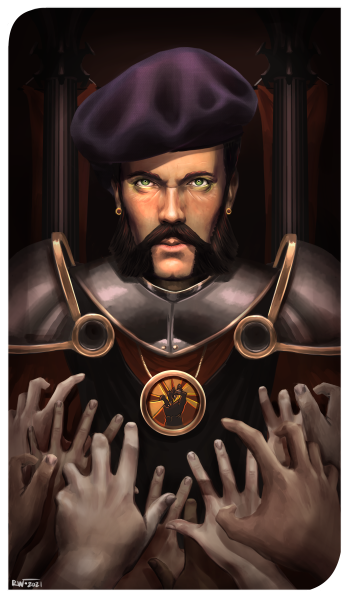 In it's upright position, the Hierophant represents spiritual wisdom, religious beliefs, conformity, tradition, and institutions. I've wanted to do some cards for evil characters for a while and it finally hit me that our resident Head of the Church of Bane would make an interesting subject as the Hierophant / High Priest arcana.

The original rider waite card depicts the Hierophant as a religious figure sitting between two pillars of a sacred temple, with two followers kneeling before him. For Barry, I've maintained the two pillars, but replaced the two kneeling figures with the hands of his supplicants reaching/grasping for him and the symbol of Bane he wears around his neck. They cannot reach him or the symbol, however, reflecting the towering austerity of the Black Abbey and its head.

Random Notes:
- I did a lot less linework than I usually do for these cards! Hopefully it's not noticeable, as my goal was still to keep a similar style.
- The many hands were a pain in the behind to paint ... (even considering that I cheated and only did about four actual variations). For some reason I really like the imagery of a ton of hands grasping/reaching for things though. The effect I was going for was a grimy but evocative feeling.

Just three more to go! Maybe I can actually finish this year ...

And thank you everyone for your kind words!

Here is Osric's sister Orelia as the Temperance card: 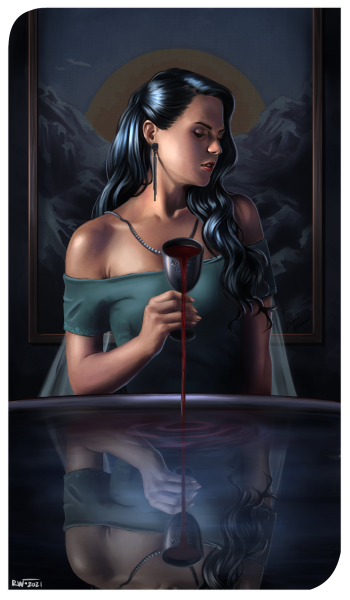 Osric's calculating and politically-minded sister as the Temperance card. She gently tips wine (blood?) from her glass into a pool of water below her as her reflection mirrors her action, causing the poured wine to flow into each other. Behind her, a painting of a sunrise tucked behind mountains, leading to an open sky above. Orelia's figure is bathed in light, but she has turned her face away so that it is hidden in shadow, representing the duality of her character: a noblewoman of elegance and gentility masking her sharp intellect and ruthless ambition.

Random Notes:
- The wine flowing between two goblets, the mountains in the background and the halo/sun around Orelia's head are meant to recall the symbology of the Rider-Waite card.
- The painting in the background is signed by Devin Altairese (you can see if if you really squint), the same artist and architect who Osric has attributed with the design of House Vale. Devin Altairese was actually a NPC from a previous NWN2 RP server run by one of the best DMs I've had the fortune with whom to play the game.
- I really had to wrack my brain over who to use for this card - it's something I've been mulling for a while, but never really settled on anyone. I finally branched out of the PCs that I've met and settled on Orelia (I guess she technically is still a PC, but she has been safely tucked away from BG's shenanigans while running House Vale's Neverwinter chapter).
Last edited by wangxiuming on Sun Feb 07, 2021 4:45 am, edited 1 time in total.
House Vale Guild Page | House Vale Rumors & Roleplay | Osric's Biography | Story | Doodles & Things
Top