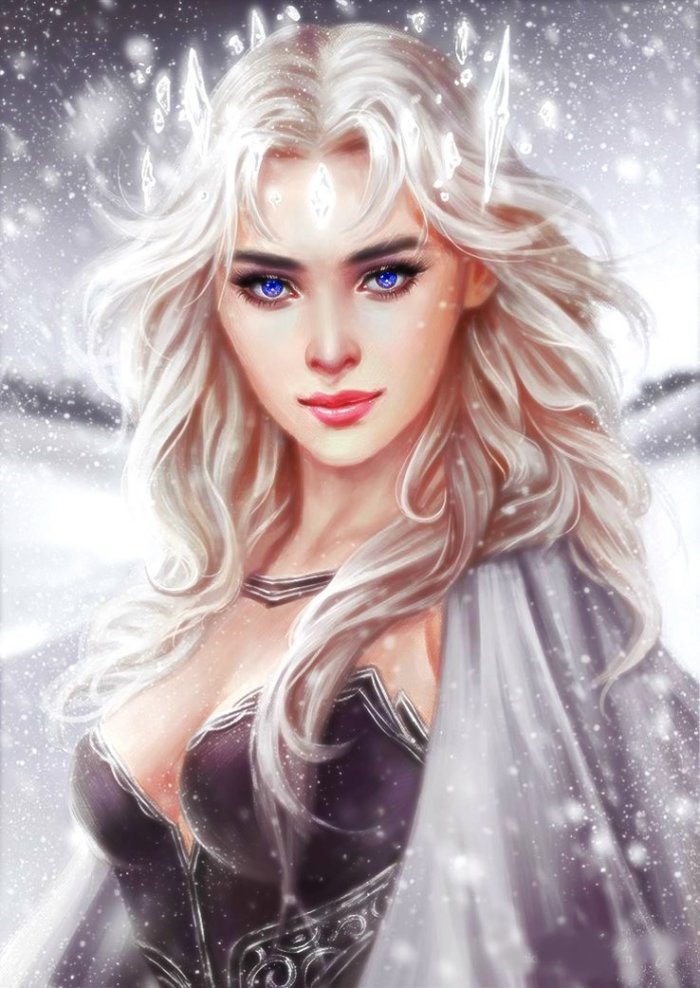 Freya usually wears her feathery soft falling hair wild and free. I seems like it has its own life, once touched it always finds back into its form and reaches her shoulder blades. It has a gloss like fine silver yarn without making her look old. Sometimes she also wears it tied together and it's well cared.

An almost ridiculously small figure crosses your path. She doesn't seem very bulky, her strength is not visibly apparent. Only those who know her well or have seen her in action, may know better. Her slender yet female body moves with grace.

This woman is an exeptional beauty, her face is heart-shaped and looks timelessly youthful. Depending on the light its ivory white also has a blueish glimmer. Her skin is flawless and seems soft as silk, which might tell of an old heritage. Her lips are full and rosy, with slightly higher corners of her mouth. THis makes them look like an everlasting faint but friendly grin.

Another uncommon thing are her slanted eyes. They have an unwordly strong royal blue, also a rare sight. Once in place, once absent minded they look into the world, but with an experience as if she'd be older than she looks. They're framed with thiick dark lashes.
Sometimes her small, pointed ears poke through her hair.

The amazing scent she is naturally surrounded by, might vary. In warmer days, it's flowery-powdery. It reminds of wild roses, cherry blossoms and other flowers like a spring or summers day. In colder times it smells sweetly-flattering like winter-jasmin, fruit and honey, reminding of Midwinter. Both scents have something pleasant and sensual in common.

All in all, her Charisma is cheerful and gentle at the same time with a hint of waggishness. She clearly is a Northern type. Her voice speaks clear and light, and has a weird Northern accent, that has also a hint of the Moonshaes and the unapproachable East in it. When she sings, her voice sounds otherworldly high, and the accent is nowhere to be found. She is rare to anger, mostly relaxed and easy-going - though at times someting wild and passionate seems to slumber beneath the surface.
Last edited by Miyuki on Mon Jan 20, 2020 2:55 am, edited 4 times in total.
Self-confessed tkl tool denier!

Re: Freya - A weird Lucky Maide 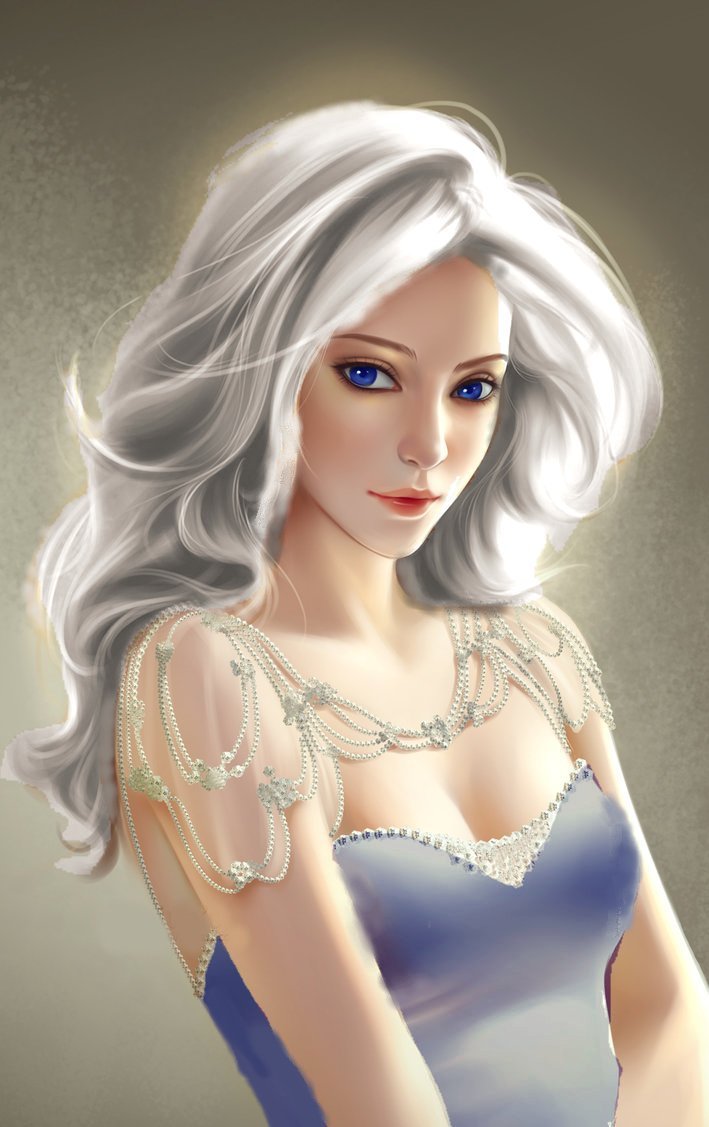 Base Class & Proposed Development: Use your imagination

Allthough she had a little of everything in her life: Joy, love, success, pain, bullying, betrayal, political intrigue, being cheated on and loss of loved ones, loyalty to friends and family has a high priority for Freya. She seems so devoted to those she cares about most, she'd not chance a single thought, before she would come to their aid and support. Also she is very protective about those she really loves, guarding them from harm and even from themselves if needed.

Freya is no longer the young girl that reached the Sword coast once upon of time and she lost a good part of her mental innocence long ago. Experiences made her what she is. At first glance she is outspoken, open-minded and not shy to talk to others. Only if they don't seem responsive, she may leave them be. She smiles and grins and laughs very often. But at a second, depper look, she can also be serious if the situation demands it. In addition she has a party-going, playful and adventurous side. She may be the most unusual and happy-go-lucky Aasimar, some have ever seen.

But behind the cover, there's a caring and sensitive soul that will do all in its power to help those who wish for help in making their luck.

Usually, Freya wears the colors of Tymora, Blue and silver. In times of peace she prefers to dress according to the occassion and her mood. Once she can be seen in serious or noble robes. Another day it can be cute and body-fitting shirts or dresses.

While adventuring she wears a plieable silver-blue MIthral armor or Mithral chain shirt, which are nonrestricting of movement and spellcasting with gloves and boots of best quality to support her abilities. On her belt, there's quite a collection of pockets for healing supplies and trinkets, along with a scroll case. She mostly keeps a long sword that is obviously an elven piece of art and a short bow with her.

Always she wears a holy symbol of Tymora in form of a Lucky Coin on a necklace made of silver. The pendant shows the face of a young lady. On one side of the coin she smiles. On the other side she's crying, to remind her that Tymora and Beshaba are still sometimes closer than some might want to believe.
Just as well she almost always carries an instrument with her, and it seems time and time again another.

Lucky Maiden:
Freya seems to have her own way to serve Tymora by offering help with adventuring and healing. She also supports people in many other ways of making their luck. May it be opening a business, counseling and problem solving or whatever anyone is planning to achieve. Even love is a way of Luck and Happiness to her, so who would wonder, she even would marry couples togther and bless children.

Bardess:
She loves to perform if it suits the situation and occassion in her eyes. She sometimes exposes herself as a „nerd of instruments", as she palys a good number of them. She seems to have a deep and special realtionship to her music, not everyone understands. What exactly it is. one might have to ask her.

Despite having had a quite normal childhood, she seems to know what hardship is. She experienced a lot later in her life. She may have had several ranks and titles in her past. There’s a lot of formers that mirror her experiences, good and bad ones. Word has it that she became a Master Baker on the Moonshaes and successor of a well-know Master Chef in Kara-Tur.

Her past consists of two parts. The first begins with the usual "I was born...i was raised...i grew up...". The second has a "I died ..and was saved ..." in it as well. One may have to ask her in person about it. Then she may decide what, and how much she tells about it, depending who asks, when or where she is being asked. It also depends, if she feels she can trust that person.

If asked what brought her back to the Sword Coast after she left a while ago, she may mostly answer it was her godess Tymora. Which is not a lie at all. Indeed, she accompanies adventurers on their travels if she sees the chance to help them, solve their task successfully and if she sees the goals as agreeable. If anyone remembers her works in earlier days, she may say that she's no longer up to high ranks and politics really. About the rest, one may have to find out and time will tell...
Last edited by Miyuki on Sun Jan 19, 2020 12:46 pm, edited 22 times in total.
Self-confessed tkl tool denier!

Re: Freya - A weird Lucky Maiden

Bloodlines - What is, what was and whatever will be...

Freya learned in time, what her heritage really is. She never had the chance to be taught by her ancestor. In fact she only met her twice in her life. Which might explain why she doesn't seem like the typical aloof or lofty Aasimar, rather like an ivory-tower human at times. She has absolutely human fondnesses like sweets and love and passion and joy of living. Nevertheless, she's aware that she's diffreent and learned in time....

....that there are different types of Eldarin. But they are more than fey. They all have their own way to live and their own life purpose, their own goals they followed, serving the Seldarin. Many of them even are drawn to arts and music.

Some of them are tall and have wings, called Firre or Tulani or Shiradi or more. They fight evil creatures, keeping the freedom and peace. Some protect beautyful things, music or even talented bards on their journeys. Some speand their life dancing around fires and leave the wrong impression they wouldn't tak life seriously. But in fact one should better not antagonize them or they would from one moment to the other feel the wrath of those powerful beeings.
Among the most known are Ghaele - Knights-errant of the celestials who quietly muster resistance and offer guidance to any of good heart.

Others are tiny, only two feet high and appearing similar to willow wisps but in fact the are so called Coure. They often work as messengers of other beeings of their kind. Then there are Bralani , not tiny, but sure among the smallest Eladrin.

Wild and feral eladrins that can assume the shape of a whirlwind or zephyr of dust, snow, or sand. Those caught Freya's attention most. Some say, they represent storm and wind and hold dominance about them.
Bralani live from moment to moment, have a strong passion. Also they love competitions of body and mind. They are also known as the fiercest and wildest Eldarins. They usher in winter in the great cycle of life, death, and rebirth.

So it's no wonder, they even look that way. They might remind of short pale elves with sky blue skin and silver-white hair. But in fact, they count as celestial beeings. They can be met on cold places as well as in deserts.

Now also Freya began to understand why she began to change in that way and still is changing. For from time to time, such old beeings have children with humans, too. Then their blood is passed on over generations and generations...like it happened in her family... 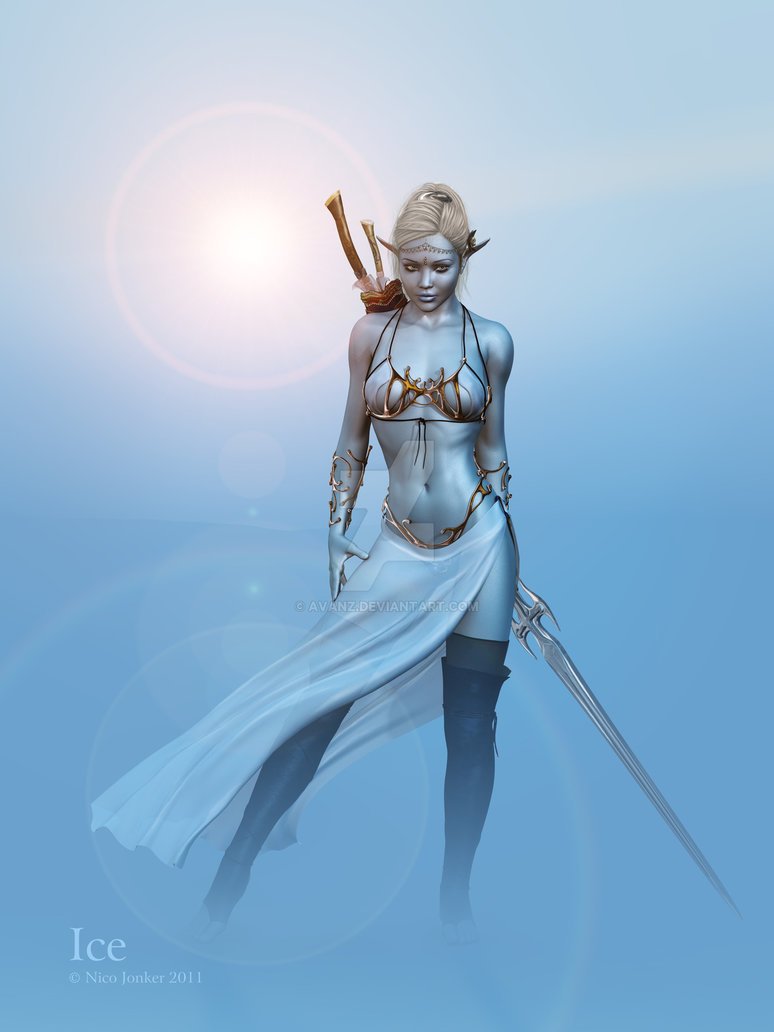 Freya is aware that her blood influences her very being and behaviour strongly. She also tries her best to balance it with her humanity.

Hidden: show
((It is on Intention,that parts of the Story, background and other informations are missing. This story is meant to help understand the character, also I want to avoid too much metagaming on the deeper parts and her past . If anyone wants to know more, please ask and find out in RP. Thanks for the understanding.

Re: Freya - A weird Lucky Maiden

((Full Version reviewed and approved by DM foresight. Thanks for the support.

Freya Evans, Lucky Maiden and Bardess on the path of Tymora [Bio] [Journal] - "Luck isn’t only random. The best Luck is what we make for ourselves."
Seraphina Saphiremoon, Wizard-Appraiser on request - “Not being a usual bard merchant is an advantage.”
Top
Post Reply
4 posts • Page 1 of 1