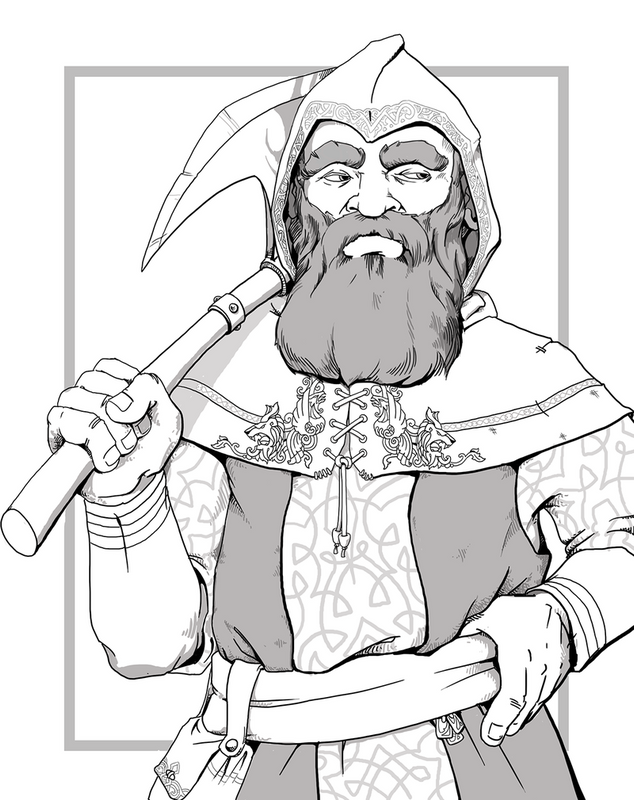 A fair-faced Shield Dwarf of early adulthood for the Stout Folk. His skin tone is tanned, showing that he has traveled upon the surface equal to his adventures below ground. Of average height and weight for his Race and age, Simsae shows brawn but with a glint of sharpness in the eyes and an equally tactful grin. Others of Dwarven knowledge—or those aware of recent Dwarven history—would likely know he is of the generation of the Thunder Blessed. Unlike most Shield Dwarves, his countenance almost always has an open and curious expression, though his expressions can often show determination, insight and even a sort of dedicated frenzy, into and about events visible or non-visible, around him.

Simsae is almost always in light and extra-mobile armor, which itself is plain but polished, heightening the aspect of the mithral ore. His belt has many a small pouch and curiosity attached to it, hung with ease yet care and purpose. Most often he travels with a sturdy hood over his head, from under which he can actively observe his surroundings without too much attention. He carries a typical dwarven war axe that appears well used yet in immaculate care despite what might be a family heirloom, actively used by many generations; it is slightly unusual in that at the bottom of the axe handle are metal rings tightly stringed, such that when the axe is flicked and turned with a certain type of force and rhythm, the metal rings sound out a song much like a tambourine jingle.


Background (as it is known):
Simsae is of the age of the Thunder Blessing, having recently entered adulthood, and taken on to adventuring. He has been indoctrinated into the Telormar Gultor from an early age, while a youth in the clan Orcslayer, now sent to the Kingdom of Kraak Helzak to bring the values of the Telormar Gultor to that kingdom and further indoctrinate valorous Stouts into the fold.

The Orcslayer clan has not been seen upon the Sword Coast in many years. Simsae's beloved uncle, Baggar, had brought many tales of his adventures over the years previous, back to the clan hold, and shared them with a youthful and wide-eyed Simsae, as he grew to adulthood. When Simsae reached the age to adventure, these tales, now turned into driving fantasies, propelled him to venture to the Sword Coast and align the visions with reality (as they would align with his Telormar Gultor "mission").

Though young by Dwarven standards, Simsae has grown quickly to be a skilled bard and battle-tested warrior. This is not odd, since his clan, that of Orcslayer, takes its namesake with utmost seriousness, and all young Stouts are hardened for warfare the moment they can hold a war axe.

Simsae's natural talent of words and song continues the long legacy of bardic powers of the Stout People, often found in the drumming and chanting heard deep within the tunnels and caverns of the Shield Dwarf realms. Simsae in particular has focused the hymns and rhythms of the Dwarves to greatly guide his war axe in battle...though in times of peace, he continues to foster his bardic skills to record and share the cultural ways of his people, spread news among the illiterate through song, and continue the legacy of dwarven performance for those of the Thunder Blessed generation.

Since arrival to the Sword Coast, and within the first months of his arrival within the Kingdom of Kraak Helzak, Simsae has found reason to take up residence with the Order of the Golden Hands of Vergadain, forming within Kraak Helzak, as the trade routes of that Kingdom do expand, both on the surface and underground with an opening of the Upperdark trade routes. This Order of thieves guild-like dwarves seems to suit Simsae's background and mission as Telormar Gultor, as the Golden Hands "task themselves with defending a variety of dwarven interests throughout Faerûn."