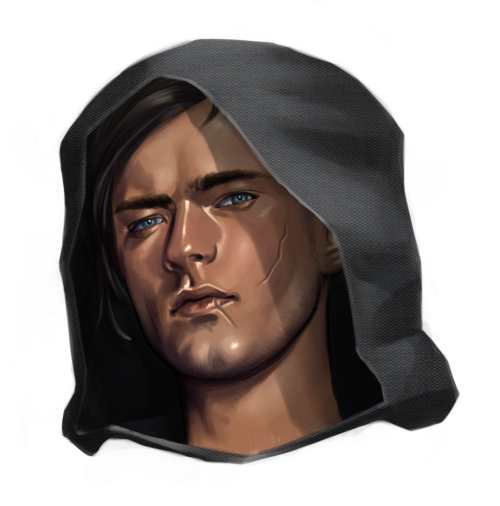 
« Appearance »
Hair Color: Dark brown, almost black
Eye Color: Light hazel-gray
Skin Tone: Deeply tanned
Stature: Tall and muscular, very fit
Distinguishing Features: A defined scar splits his lower lip, then another jaggedly follows the cheekbone on the left side of his face, which is seemingly always in a state of 5 o'clock shadow
Weapon(s) of Choice: Whatever suits the occasion or the job, though never ever a bow
Attire: Darker, neutral colors in a pretty decent state of cleanliness

« Background »
Ozul was born at the end of Nightal in 1328 DR as the youngest of four siblings. His father was a skilled fletcher whose family trade had been contracted with the Purple Dragons for some generations to supply their outposts in the Thunder Peaks with arrows and bolts, in addition to the regular business of outfitting the many hunters in the region. The family's fortunes were substantial as a result.

The eldest two Thorn sons planned to take on the fletching business after their father's inevitable retirement sometime in the future. The only daughter of the Thorn house set out to cultivate her musical abilities, learning the ability to weave a tale and dazzle with a tune from her mother. Ozul entered into an apprenticeship with Tilverton's best blacksmith, thinking to expand the family business someday with the ability to forge other weaponry.

By the time Ozul began his training, his sister was about the right age for courting and had drawn the eye of a member of House Huntcrown, who had holdings nearby that served as a base for noble adventuring parties to gallivant through the mountains. For two years the noble was devoted to the young woman, so much so that all seemed to imply that a marriage would soon take place. That is, until the beautiful fledgling bardess was found, murdered, in the wild—tied to a tree and pierced by many of her father's own arrows.

It was discovered that the tips of each had been coated in the poison of giant wasps, the calling card of an infamous group of assassins known as the Fire Knives. Soon after this, the identity of the Fire Knives was unmasked throughout all of Cormyr to reveal that their organization was comprised of members of the noble Houses Cormaeril and Bleth, a revelation that implicated two frequent adventuring companion's of young Lord Huntcrown in the murder of Ozul's sister.

The brothers Thorn sat in stupefaction over the news in Grimwald's Revenge, grief and rage making them bold to enter the ill-reputed inn. It was there that Ozul and his siblings met a traveling Hoarite—maybe by chance, maybe because he was drawn to the tale of the grisly murder in Tilverton out of professional interest—and began to acquaint themselves with the taste of revenge.

Under the tutelage of their new mentor, the brothers tracked down one of their sister's murderers to an estate in the Dalelands. Like a clap of thunder that comes without warning, the nobleman found himself surrounded, subdued, and tied up by three young men and a Hunter of Vengeance. He cowered at the masked visage of the Hoarite while each of the brothers stripped something from the noble: one took the fine shirt off his back. The next yanked the crest of House Bleth from where it dangled around his neck. Ozul himself took the assassin's bow and struck him across the face with it before breaking the body of the expensive weapon over his knee.

It was the Hoarite, however, who made a garrote of the bowstring and executed the brothers' revenge.

They returned to Tilverton, justice half completed. The elder two returned to their grieving parents and their lives. Ozul swore that he would not rest until his sister's other murderer was dealt with the same way as Bleth, so he joined up with his new mentor to learn the ways of the Hunter. They parted ways after a decade, and for another four years after that, Ozul has singularly pursued the end of vengeance for his sister...all the way into Baldur's Gate.

"Oft have I heard that grief softens the mind, and makes it fearful and degenerate; think therefore on revenge and cease to weep."
[ King Henry VI, act IV scene IV ]
Top
Post Reply
4 posts • Page 1 of 1