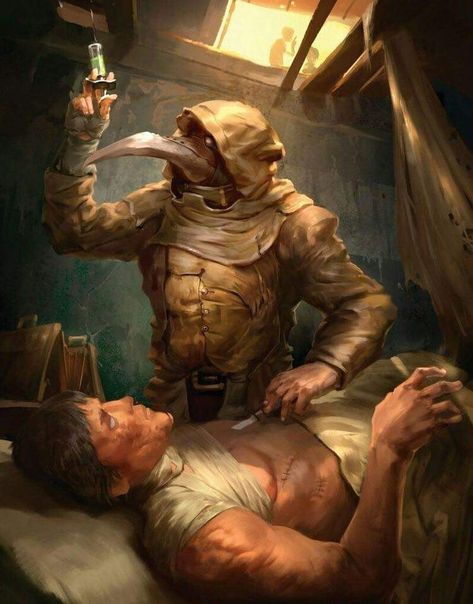 As a bit of an average height and weight man Doctor Larfleeze does not stand out entirely by his characteristic features. Although most would notice some slight nobility in his demeanor just by the way he carries himself. When people look him over they could soon take notice to his near perfect posture with a straight upward back, hands folded behind him tucked under one another with a hint of a slightly sharp bicep muscular tone. He stands up straight and keeps his head high often times so pulled off so well he gives off a strange illusion of being precised taller then he actually is.

Fitted with a wide array of slightly high class looking attire Doctor Larfleeze would often be spotted wearing his original formal surgeon outfit. Most of the parts of the outfit seems warn tattered and pertained a small hint of blood, mud and other disgusting substances:

The hat was used to cover the head and prevent the contagion. It was important that it was wide-brimmed, because this characteristic indicated the profession of the Plague Doctor. The hats of course were of tanned leather and were tied tightly with leather straps.

In the area of the nose, the mask had a triangular cavity similar to the shape of a bird’s beak. The beak was fitted with leather straps, just like the mask itself. This cavity had two small breathing holes, and to filter the air was put in the cavity different aromatic herbs, dried flowers, spices, drugs, vinegar sponge, or anything that filtered the Bad Air and prevented to smell the sick. These aromatic products were also impregnated throughout the costume, the robe and the trousers. Some of the aromatic substances were ambergris, mint leaves, liquidambar orientalis, myrrh, laudanum, rose petals, camphor and clove.

The tunic was made of thick waxed-canvas, and should be long, from the neck to the ankle; and without opening in front. Dark colors (mainly black) were used to hide blood stains, vomiting and mud.

Under the tunic, the Plague Doctors wore a thin leather blouse with short sleeves, always tucked in the pants to make it more hermetic.

The canes were also used to keep people away or prevent closeness to the doctor. Sometimes the sick people rushed to the Plague Doctor to ask for help, so it was necessary to have a good wooden cane to prevent them from touching the doctor. Doctors used smaller or longer canes, but usually always made of wood.

In the city Mulmaster, 19th of Ches, 1288 DR Larfleeze was born. He took up the last name of his family that day and was deemed the middle name of Keres from his father making up his full name of Larfleeze Keres Hamoa of the Hamoa Family. Within the city of Mulmaster, Larfleeze was one of few families of nobility within the city granting him the title of a -Zor-. Due to this in his upbringing Zarfleeze was taught at a young age proper mannerisms and house hold etiquette. Of course as hard headed as an child would be at such things Larfleeze slowly picked up on the teachings of his mother and father after many years of constant lessons and punishments for not doing things correctly.

As time went on and Larfleeze grew into a young man he soon took up lessons of the professions of his mother and father. His mother, a nurse who assisted many doctors and treated the ill, injured and diseased of Mulmaster. His father, a Professor in the study of sicknesses, illnesses, diseases and poisons. Often times his mother and father would work together to solve and treat rare cases of uncommon aliments on the unfortunate patience to have obtained them. Rarely were the two of them unsuccessful in being able to treat anything that was put on a hospital bed in-front of them through their combined efforts.

As the years went by Larfleeze had grown into a prominent young prodigy of a Doctor under the guide of his mother and father. The three of them worked in harmony treating patience and curing the sick. Some even saw them as chosen of illmater due to how successfully they diagnosed diseases and poisons. Their great achievements soon then caught the ear of young blade baron from the Wingstral family to which they soon took up a family doctrine as their personal EMT's under their houses orders in the year 1312 DR.

It wouldn't be long however until Larfleeze's family was called into action by the young baron. As the year 1313 DR had soon dawned upon Mulmaster so did the gnoll invasions from Ironfang Keep. The raids were almost relentless bringing forth many injured and sick under the hands of the gnoll raiders and their shamans. As the years had gone by the severity of the situation only grew more and more peril as the many doctors of the city were put to the test and the hospitals and medical barracks were filled weekly. Larfleeze and his family took on the more extreme cases of the war often times leaving the minor injured to the other doctors and nurses in attempts to cure those who were plagued or sickened by the highly skilled shamans of the gnolls. Although all would soon turn into ruin when his mother had caught a sickness from another patient. With his mother bed-ridden his father halted his duties in attempts to cure his mother of her ailment. Things were not looking well however, as in his attempts for months to cure his wife he soon caught her aliment and would now also be bed ridden beside her leaving Larfleeze to find the cure what had taken his family under its sickly grip.

Larfleeze soon enough reported the situation to Sword Baron Wingstral in which the baron thought the best course of action would be for Larfleeze to join the front lines as a field medic under a special operations task force so he could continue his job and also study first-hand what the gnolls and their shamans use to sicken the city soldiers and perhaps find a cure to this families illness. Without hesitation Larfleeze agreed and was put into a training course under the orders of the Sword Baron for a special task force for finding and securing captured or trapped soldiers in the back-lines of the gnoll lines.

Many years went by without any problems Larfleeze and the task force found themselves proving to be a minor turning point to the battles saving many lives and gathering the necessary information required for the missions. But all good things came to an end after the 5th year of operations when the task force itself inevitably was caught and apprehended to be dragged to Ironfang keep to await their doom. Thrown at the feet of the gnoll chieftain the group battered and bloody would be used and test subjects, punching bags and toys. Any of the force who survived the deadly games of the gnolls had been dosed in plague filled spells by the shamans of the gnolls and thrown into a chamber to either die slowly or rot at the hands of the sickness spells of the shamans. The group began to slowly fall one by one as they surcame to hunger, illness or madness. Larfleeze took this time for desperate measures taking the bodies of the dead who fell in the chamber and cutting them open in a desperate display of rot and blood with jagged rocks and sticks littered in the chamber to find out what little he could about the illnesses that plagued his team. What he found out only haunted him more as he soon saw similar syn-tomes on the bodies of the dead that his mother and father had. This discovery soon breaking him into madness and slaying the rest of his team in attempts to cut open the bodies and find out more. His -treatments- getting more disgusting as time went on as he researched EVERYTHING! The brains, The organs, The hearts, The tongues, The eye balls anything he could, as he scrambled to find the answer before his last breath. It wouldn't take long for the gnolls to catch onto his ploy opening the chamber to the blood covered doctor and dragging him back to the cheiftain for interrogation. The cheiftain and his servants beat and burned him in their attempts to find out what the doctor was doing, although Larfleeze would say nothing, only lieing there on the floor with broken ribs and a broken will before the chieftain spoke sparking one last glimmer of hope in him.

"You are my enemy and I will not show you mercy this day, however..."

The chieftain turns his gaze to a statue at a corner of the room. A large silhouette of Talona would tower over the room gracefully, a bowl filled with a sickly green liquid upon the hands of she who is the matron the content within the bowl.

"She who is Mother of all Plagues has the answer you seek boy..."

"Maybe in this rare case -she- will be merciful. Find your answer for he who drinks may live or die."

As the chieftain spoke his last word he issued a silent command to release the doctor. And with bonds broken, minutes to live and one option that could solve it all. Larfleeze used the last bit of his strength crawling and scratching to the silhouette of the The Plague-crone and drank the very content within her bowl before falling to the floor in a lifeless display before the gnolls.

After many days Larfleeze would be awaken by the slash of water upon his face gasping in life once more as he breaths and wheezes on the ground before the gnoll chieftain.

"Now you understand the few gifts that Kiputytto can give... and the many things she too can take away..."

From that moment on Larfleeze served as a slave to the gnolls under the supervision of the gnolls shamans. He treated the many wounds of their warriors in exchange for food, water and his life. The gnolls shamans soon deciding to teach him minor shamanic magics simply because they found Larfleezes traditional methods of healing their wounded slow and annoying.

As the years went by Larfleeze gave into their teaching and culture little by little. His adaptability to shamanic magic grew rapidly as did his knowledge on the infrastructure of the Ironfang Keep. As the battles grew more and more hectic the gnolls focused more of their time on front-line and the injured and less on Larfleeze evening allowing him to treat the wounded without supervision due to the many wounded that needed care. Larfleeze took these quiet times alone with his patients to end the lives of them slowly and quietly with his own malicious diseases hoping in his absents they would spread before inevitably finding his escape out of Ironfang Keep traveling south past the swamps of the flooded forest to cover his tracks and trail and into the city of Ylraphon Port where he heard rumor about a massive army of Talona in 1351 DR. Desperate to find the answers to save his family that he knew only the great Kiputytto could solve he pitched a ship into the sea of the fallen stars towards the sword coast to follow the presence of his now patron deity both to gain her favor and to find the answer that could save his family.