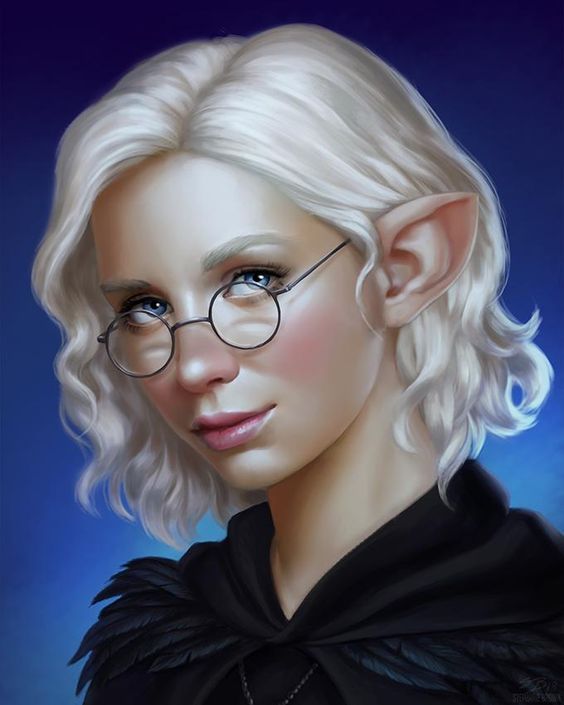 To collect corpses, to then ship to Ras Nsi in chult to fund his crusade.

To study the dead and practice the many divination that allow those to see the ill-omens and perils of the future. Ultimately learning more about necromancy and divination.

To become powerful enough to gain Ubato's gift of Barae, like her teacher Ras Nsi.

To restore the Undercity to it's former glory.

Batibat hails from the southern peninsula of Chult, within the port city of Nyanzaru. Born in the year 1323 Batibat lived her youthful days as a student within a healthy foreign merchant and mercenary mixed race family. Under her mothers guidance Batibat spent most of her time studying religions and magic. Under these teachings it wouldn't take long for Batibat to follow her mother's guidance to begin drawing depictions of mazes as her newly found lord Ubato wishes it to be so. While not focusing on her studies of religion Batibat would find herself traveling the jungles of chult with her father a famous halfling archaeologist who sought after the many vastly hidden wounders chult had to offer.

As time passed on the day of 1333 batibat and her family were invited to join the rest of the chultan citizens to visit Mezro and bare witness to the annual celebrations of the Mezro's Barae, the 7 chosen of Ubato themselves. So without much hesitation Batibat and her family ventured forth to Mezro to join the celebrations under the great 7 barae.

The city was filled to the brim of people cluttering the streets as they arrived in Mezro. Trade, gossip and laughter filled the city as Batibat and her family inched onward to get a view of the 7 atop the great steps of Ubtao's Temple in the center. After much pushing and shoving soon enough the the temple was brought into view as the presentation of the Barae had begun.

Soon enough a batari shaman would emerge from the temple, his arms raised and his voice booming from the top of the temple itself to address the people.

(Spoken in Chultun)
"Mahala sharah, great citizen of Chult and visitors of Mezro. The great Ubtao shines a smile to thee in these festivities in honor of his champions!"

"Let us bring them forth to join us in these times of feast and family!"

Soon enough the barae emerged as they were presented to the city.

"And his grace! The undying negus negusti, King Osaw I the Wise ruler of the holy city of Mezro!"


As the king soon emerges during his introduction the city burst in cheers and celebrations of the Barae who grace the people with their presence and festivities upon this glorious day!

After some time Batibat and the rest of the family separate to enjoy the many attractions the city had to offer. Batibat herself would make her way into the great temple of Ubato where the many barae would sit upon 7 high chairs ascended above the citizens below giving their prayers and blessings to the people. Batibat would approach one of the 7. Ras Nsi sat above the many that stood below him. He looked to be a tall human male, wearing a sky-blue cloak and bearing a rapier sheath into his sash on his waist. Not being able to get his attention from admits the crowd Batibat ventured to attempt to get a closer look at the other Barae nearby although seeming to have a hard time doing so admits the crowd much taller then she. After some pushing and shoving she finally pushed her way out of the temple and into the streets of Mezro again where she met up with her sisters and enjoyed the festivities with them until nightfall.

The day after the celebrations of Mezro batibat found herself back to her normal routines at home. Where she continued her studies of the gods afterwards joining her father in exploring the jungles of Chult and it's mysteries. Her and her father get the their campsite where they soon enough break into separate directions to venture forth and cover more ground. As Bati ventured forward she soon found some strange footprints in the soil. After following them the single fair of prints soon became 2 then 3 then 4. . . Until the prints resembled a small group venturing into the dense jungles. Soon enough the footprints would end in at a small river canal nearby. A man would stand nearby the river wearing a sky-blue cloak and a rapier in hand. Batibat tilted her head at the figure until a step from her snapped a tree-branch underneath her. She glanced at the snapped branch beneath her then to the figure who was now standing in-front of her staring upon her with glowing bright red eyes. Batibat would remember the face clearly as the Ras Nsi one of the seven chosen barae of Mezro. The man looked her over some and she the same to him. After some silence Ras Nsi would speak greeting the small hin and nodding. Batibat would bow as formally as possible to the great Barae soon enough being granted a placed hand upon her head at the gesture. The two spoke among-st each-other for some time nearby the river bed. The more they spoke the more Bati realize just how amazing the Barae truly were as she listen to the great stories foretold by Ras Nsi of his achievements. As nightfall soon begun to fall Batibat found it upon herself to swear her service and loyalty to Ras Nsi in hopes that one day under his guidance she might also one day be able to become a great barae same as he who stood before her.

In his service Batibat found herself learning and serving Ras Nsi during her expeditions with her father. She learned of the powers of necromancy to which she soon practiced in secret from her family and brought forth dead carcasses of both animal and humanoid to a remote location Ras Nsi ordered. After nightfall the carcasses that were usually piled nearby the river-bed would be gone to be added to Ras Nsi's collection as he commanded from her.

After many years in his servitude Batibat found herself progressing within many dangerous task under the orders of Ras Nsi such as infiltrating Ytepka Society ranks within Port Nyanzaru to gain valuable information for Ras Nsi. While also serving as one of the many middle men for Ras Nsi's purchases of slaves from foreign traders and the Red Wizards of Thay. On Tarsakh 1st, 1352 DR Batibat was soon tasked by Ras Nsi to board his stolen Cormyrean galleon, Narwhal currently docked at Port Castiglar which was to set sail to Athkatla south of the cloud peaks for a very important trade deal. The deal was said to take a few years to finalize and Batibat was to make sure the ship was to make it back in one piece weather the deal go smoothly or not.

And so. . . Batibat boarded Narwhal under the orders of Ras Nsi to then set sail to the city Athkatla of the Cloud Peaks with a newly gained pouch of gold and a small sending stone to her name.
Last edited by Rain on Sat Jul 20, 2019 3:07 am, edited 2 times in total.
Cerebella Dreambreaker - Insectomancer

- Found out through some fact checking and DM assistance that the Zentarium were not present in Chult until the 1500s. Thus any previous Zentarium involvement in Batibat's backstory was erased and I will be retconning to have had any zentarium symbols previously.

- Added information about an image on Batibat's cloak being the symbol of a Beholder with the center eye stock of the beholder drawn as the symbol of ubtao.
Cerebella Dreambreaker - Insectomancer