Bloodstone wrote: ↑
Mon Apr 08, 2019 5:28 am
A gruff stony man enters the lodge producing scraps of paper. He points out the pictures of a hill and the arrows leading down the a building below. Explaining he found them up in the ruins above of the lodge he indicates he believes it make be a plan of attack. 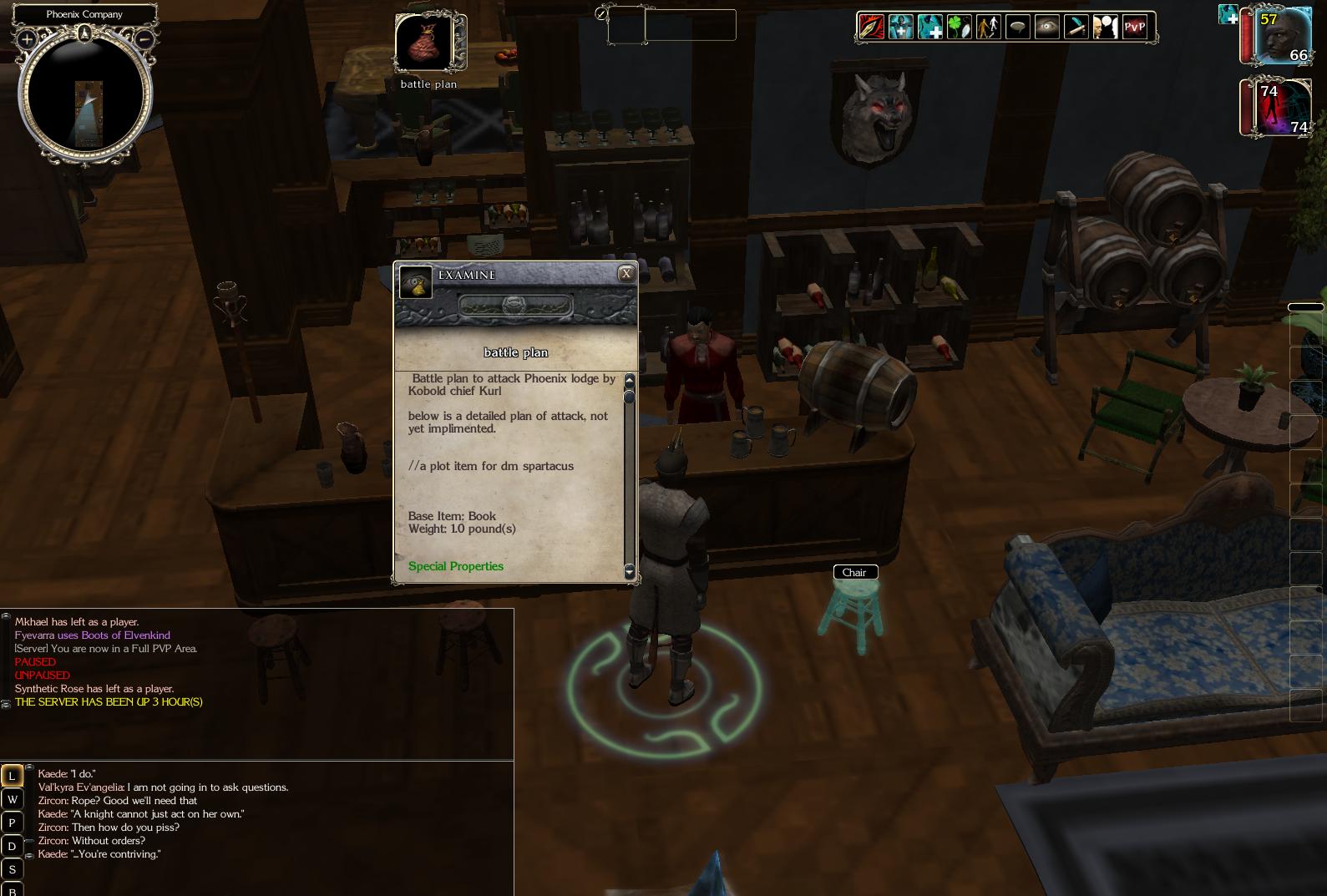 Terri would thank the man for the intel and would set about preparing for an attack. She would review the papers for any indication of a time for the raid as well as its potential strength. Lastly she would reward the man with gold and food and drink, offering him a place to stay while giving the man time to recall if He had anything else he could add to the upcoming raid.
Terri Lalani
Council of Phoenix Company
Top

Rumors of a shakeup in leadership spreads....any who investigate further would uncover this mass produced announcement.

Attention of intent to promote
Council an I have decided that we have an immediate opening for the rank of Councilors. The members are:
Toman Ironman

We ask that you each submit "Intent to accept position" letters detailing your best qualifications.

We ask that you do this as promptly as possible. Thanks to you all and good luck.

Arriving back on the coast from an extended stay within Luskan Terri would enter into a empty Guildhall. The Inn seemed to be running smoothly with the assorted travelers and regular customers but the Adventuring portion showed very little signs of activity with only one report written from Associate Rose. She did not spent much time within the empty adventurers Company and left word with Sam (the bartender) that she will be in town to feel the pulse of the city.
Terri Lalani
Council of Phoenix Company
Top

Earn 200 gold per day per person! Seeking Individuals interested in patroling portions of the city and surrounding areas in an effort to put an end to the influx of crime and muggings that has been on the increase due to the lack of guardsmen as a consequence of the soldiers being called off to the front-line war with devils. The goal is to be visible and be a deterant to any such crimes. Those interested can be recruited by Contacting Terri 'Xon at the Phoenix Company Roadside Lodge five miles to the south of Baldurs Gate near the Caravan stop and just down the hill from some hilltop ruins.

Terri 'Xon (Innkeep owner and Administrator of the adventuring Company)

Under the of Herns Initiates would be the first of hopefully many reports.
Marpenoth 30th
Azelia Rivineth has already shown exemplary service to Baldurs Gate when she witnessed and apprehended a thief attempting to steal from a citizen who was on the way to the market. When you see her be sure to thank her for her service and diligence. No one was harmed. Great Job Azelia! 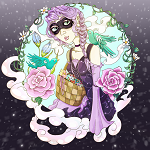 A Scroll Written by Azelia Rivineth
I joined Hern's Initiative Neighborhood Watch to help watch for criminals in Baldurs Gate and not long after joining found a thug threatening a citizen so I stepped in the thug ran as I shouted for the guards till I chased him into a ally where he threatened me with a dagger to give him my gold after trying to defuse the situation he came closer not wanting to take law into my own hands i ran like the wind with a tap of my magical boots and got help to corner the thug where he pleaded that it wasn't him. The citizen helped confirm his identity with me and the guards took him away. Yay no one got hurt! Hope the thug turns to a better path after this.
Rose Rivineth
-Wands
-treasure hunter
-Appraiser
Wysteria Moon
"Not so"Magix Kitten Nya!=^_^=
Azelia Rivineth
-Healer Priestess Wands/Elixirs/Scrolls
Zinnia Rivineth
Wizard Alchemist Elixirs/Scrolls
Astar Rivineth
Master alchemist in training
Top

Staff and members of Phoenix company was seen lined up to either side of the walkway of the lodge as Knights from the Church of Torm with great formality carried a Litter containing an honored fallen Knight from the Inn. Any who entered the Inn later may have heard that the knight was stabbed by an assassin for something that the the company agents seem intent upon defending. If asked what the item was the staff would state that they do not know.
Terri Lalani
Council of Phoenix Company
Top

An armored halfling is seen entering the Lodge, once inside he hands Samson Pepper a letter marked Hoppy.

He leaves shortly after.

Phoenix Company embarked on a training expedition to the Forest of Wyrms where the expedition party successfully felled the Green Drake that claims dominion over the forest. Any casual observer would have witnessed a fury of Magic Missile storms unleashed against the drake who was not content to be put to rest so easily. 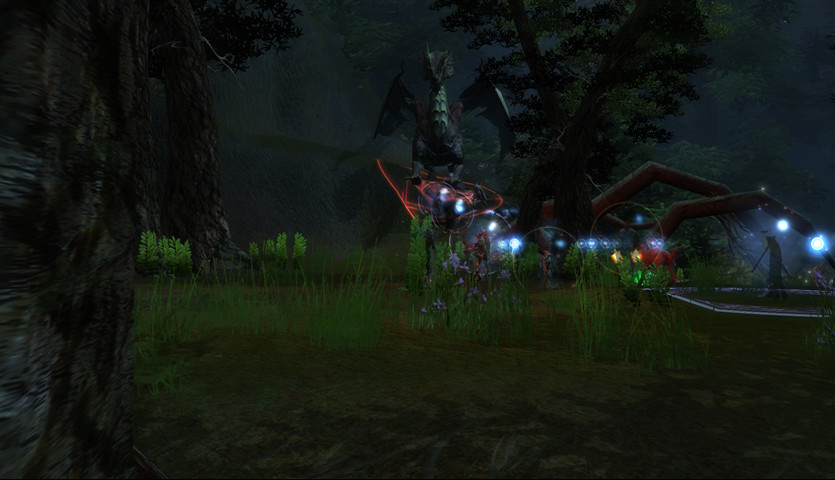 Departing the Forest of Wyrms, and bidding goodbye to a Hydra that a certain halfling choose to befriend, the expedition party would next find itself probing the depths of the Vault of the Dead. Under another relentless fury of Magic Missile Storms they effortlessly felled the Dracolich that resides in the lower warrens of the Vault. 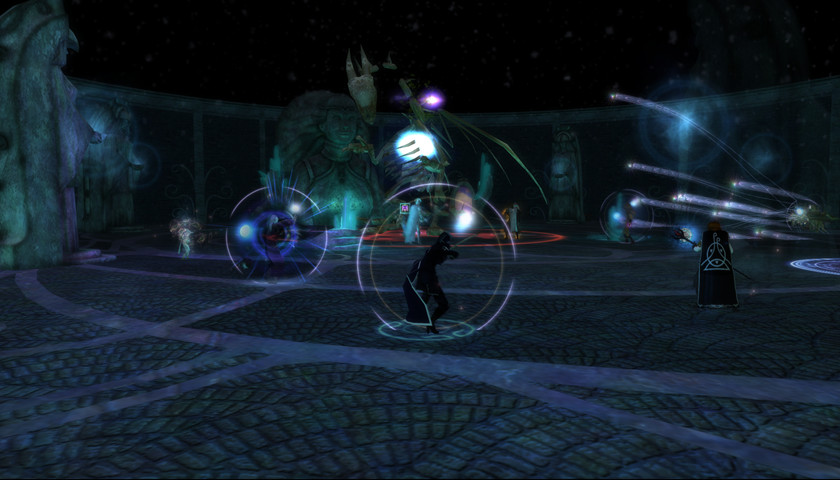 Fortunately no casualties were reported from the expedition though the expedition leader found herself the victim of a momentary memory lapse after an encounter with a lich. No one seemed able (or willing) to explain to her the reason for this sudden lapse.

Phoenix Company successfully executed Operation Esquire. The goal of the operation was to stealthily infiltrate a key troll encampment to identify and disrupt their food supply. The dwarves of Kraak Helzak were able to divert enough trolls away from their southwestern underground encampment long enough for the infiltration team to conduct its mission with minimal encounters and resistance.

The team was able to determined that the trolls were using ogres as their primary sustenance, likely because they’re the most abundant food source available in the region, granted not the most appetizing, as revealed through overheard conversations among their ranks. The scouting team successfully penetrated their encampment and identified a chamber where trolls had just finished devouring ogres and another chamber where the trolls were holding ogres captive for meal. It was agreed that it was the best course of action was to set these chambers ablaze using alchemical fire, with the ogre captives still bonded inside, to deprive King Hewbert's army of its current stock of sustenance and gradually starve it. 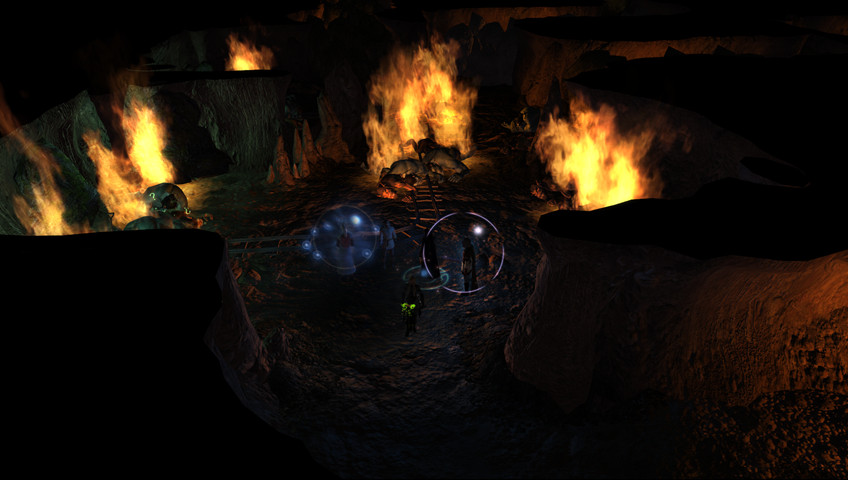 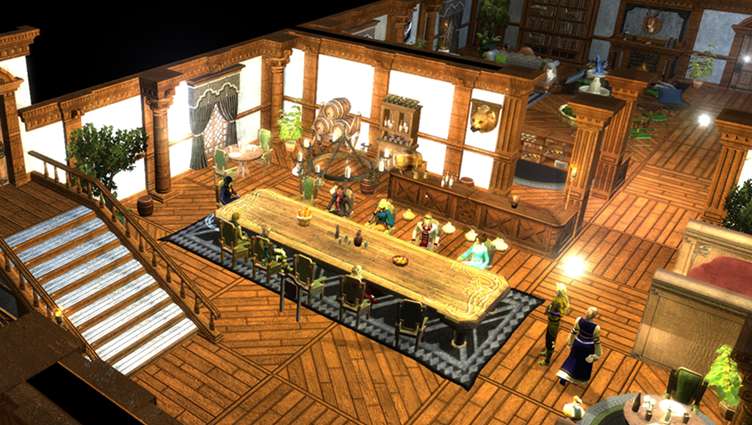 The Phoenix Company Lodge played host to a spectacular formal dinner party on the 30th of Eleasis. Guest, adorned in their most elegantly and exquisite evening attire, were treated to a delectable culinary experience and were regaled by rousing ballads performed by Mr. Hymly Finch.

Guest were lulled into revealing their most embarrassing moments and quirks to include the scandalous tale of Madam Kaisi Autumnweaver who enjoys slurping her soup and smacking her tongue when drinking tea...Utterly barbaric.

The affair concluded with Guide Isabella Villame failing to morph into a Copper Dragon thus failing everyone’s expectations - which was fine because she probably would have regurgitated her meal after performing such an intense magical feat.
Lady Netanya - Redefining Fabulous
Councilor, Phoenix Company
Top 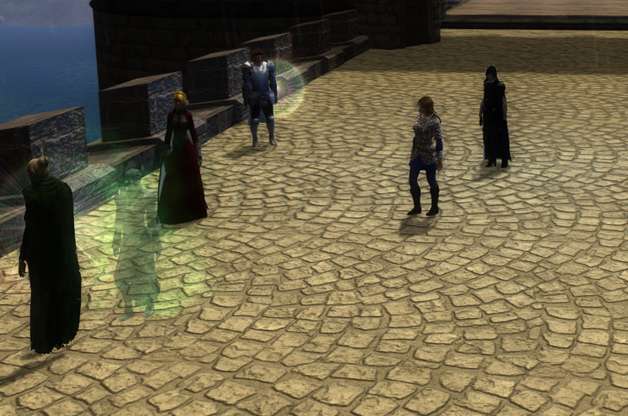 On the night of 13th of Eleint members of Phoenix Company would find themselves confronted by the ghostly visage known to the City Watchmen as the “Mourning Bride”. The figured was encountered during the course of their investigation into ghost sightings along the Chionthar that has recently disrupted ferry traffic. Research and experiments conducted by the Company have revealed the Mourning Bride to be not a mere specter but an entity of a long forgotten planar realm and linked to a far deeper unsolved mystery.

It seems the tales of ghosts are enough to cause some disruption on the normal ferry routes further in land. Stories and sighting along the Chionthar river have kept most crews from arriving at night. No real disruption though just a slight change of arrival times, although a few merchants and traders were caught out by the change.

Unfortunately a few guards let slip that a ghost they've dubbed the Mourning Bride is sighted often by new recruits along the main bridge. Accidentally furthering the story and rumours. Although when approached they have said it is little more than a rumour among the new arrivals started to keep them on their toes. Well that's what the official word anyway.