Taka can be seen wondering about the temple seemingly more enraged than is usual. His once methodical sacrifices to his beloved Queen are now sloppy with anger. He leaves the altar a bloody mess each night as the attacks continue. Each time he is shunned or ignored it fuels his rage, slowly pushing him towards snapping. Even the few he once trusted have begun to distance themselves as the halfling slips further into his animalistic rage and slowly loses his humanity.

With the recent betrayal of Netanya fueling him, Taka drags his unwilling sacrifice to the temple. He forgoes his usual, humane tools of sacrifice, opting to tear his prey apart with his hands and teeth. He is slowly sinking back to the savage ancestral roots he has tried to leave behind. As he walks into the freezing river he lies down, lets the frigid water rush over him, and closes his eyes to plan his next move. 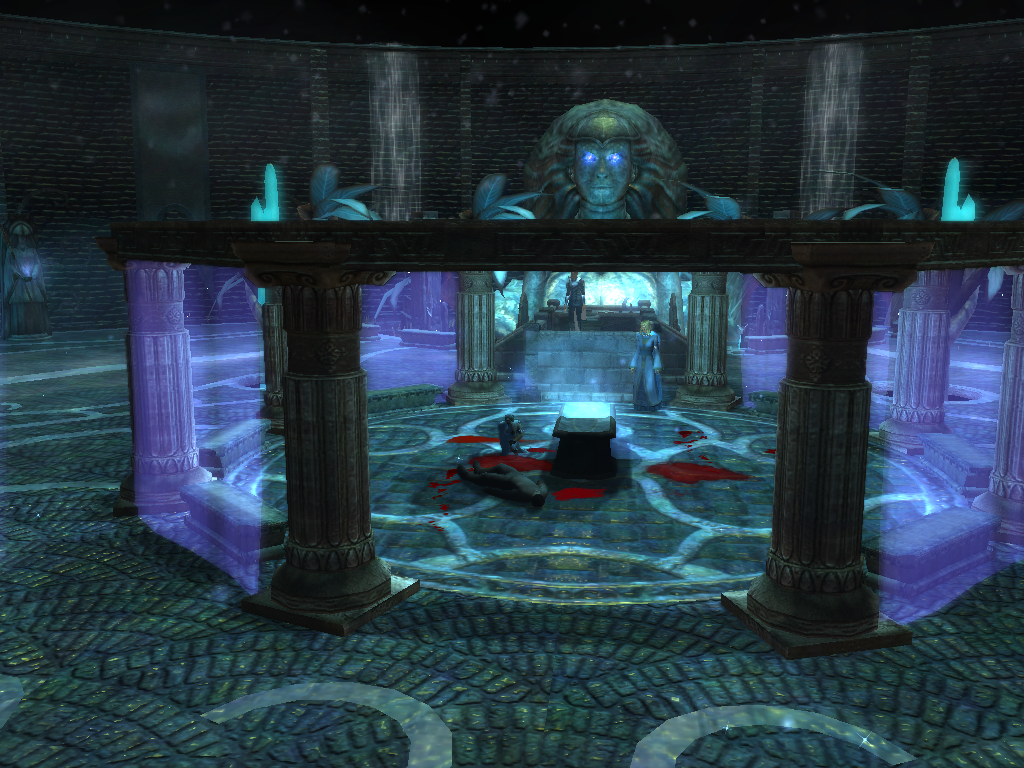 ((A BIG thank you to DM Gixustrat for the help!))
Taka-"Grunt"
Top

Taka can be seen heaving a large box full of gold and gems into the temple and depositing it of in front of the Priestess with a low bow. The feral halfling backs away, eyeing his bounty from his growing packs recent voyages from the Reaching Woods all the way to the tip of the Greypeaks. Not only was he able to release some tension, the journey also seemed to help with difficulties shifting.

As he ventures outside to prepare for his prayers, a small grin slips across his lips. He is no longer alone in this fight. The pack is growing and before long they will be ready to make their move. Laying down in the freezing lake, the days memories rush through his head as the water washes away the filth of these new lands. Soon the old ways will return with vengeance and only the strong will survive. If anyone walked past Auril's Temple in Cloud Peaks, they could see lots of snow figures of all shapes standing around the temple and lots of wolf paw prints near them.
Lamb and Wolf
Kokia
Top

A collection of snow figures grows near Temple of Auril. At night, the wind whirring between them deceptively resembles the laughter of people having fun, but there is no one there.
Lamb and Wolf
Kokia
Top

Taka enters the temple, dragging an angry drow behind him. He kicks, bites, claws and screams trying to escape as he is being forced onto the alter.

Alas, Taka manages to tie him down before glancing up and seeing Ontelima peering down at him from The Book of Prayer.

“Is gift for Queen,” He says, as he starts to strip the drow down.

“Very well. Continue,” She replies with a small grin.

The drow is stretched across the alter, hands and feet bound. He is laughing and yelling in an unfamiliar tongue. As Taka continues preparing him for sacrifice to the Queen, the drow spits a mouth full of saliva into his face.

Taka releases a low growl as he unclips a frozen fish from his belt and slaps the drow in his mouth, rendering him unconscious.

“Is rude,” he says with a grunt, tossing the fish aside and continuing with his task.

“Perhaps the tongue should go first next time,” Ontelima offers from her perch above the circle.

As Taka finishes getting the body ready, his hand shifts into that of a wolf. He says a final prayer to his Goddess before slashing the drows abdomen open.

"So where did you find a drow?" She ask.

Taps the ground with his foot "In underdark. . Taka is hunt." He grunts Usually quiet interior of the Temple suddenly change, when young priestess run inside with loud scream. Surprised Alva and Astrid asked her what happened, but she didn't answer. Ontelima spent the rest of the day in silence, with tears in eyes.

Even Taka couldn't get many words out of her, but girl promised to calm down soon.
Top

Taka can be seen by the few worshippers in the temple walking into the back room shortly after entering two screams and thumps of bodies hitting the cold frozen floor can be heard. Shortly after the feral druid can be seen dragging the bodies of the two captured drow up the mountain before the white bear could drop the lifeless bodies he spots a man hiding from the wind at the mouth of the cave. After a while the man grabbed the female drow's freezing corpse heading down the path leading from the great white dragon's cave. As he descends the icy slope taka watch's from the peak 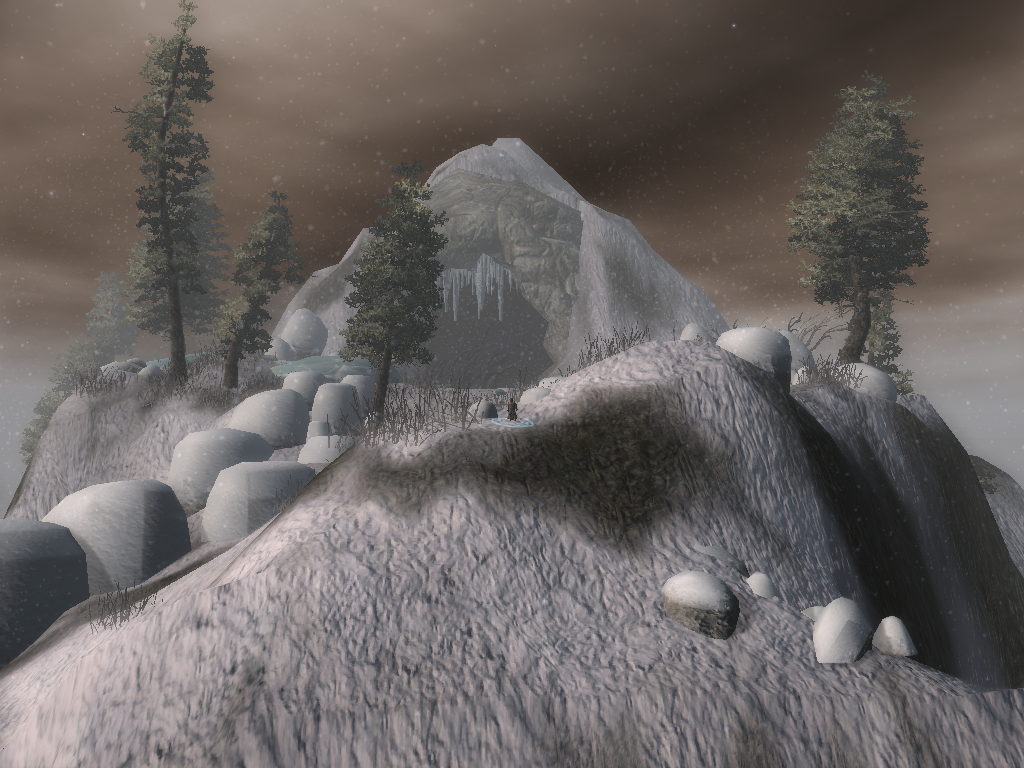 The ranger is spotted again leaving an offering of gems and curative potions with Icedawn's clergy upon his return from the icy peaks of Mount Speartop. He is carrying a vaguely man-sized body wrapped inside the pelt of a snow tiger and refuses to answer any questions regarding it.

Later that day in an undisclosed location, an unmarked grave is dug upon a hill overlooking a river and the body is interred within without ceremony or parting words.

In the snow near the altar there's something that shines, it seems someone left a diamond at the altar, almost invisible and camouflaged in the ice and snow.
Sims#4559
PM me for roleplaying here or on discord and in game (yingyangjoy)

At the evening mysterious traveler in mask visited the Temple. He asked youngest priestess for help in endurance training. The man felt great pain with every frost spell casted upon him, but he didn't make any scream. When they finished, they started to talk about philosophy and religion. Eventually, masked man returned to his journey and left his drying blood by altar, as payment.
Top 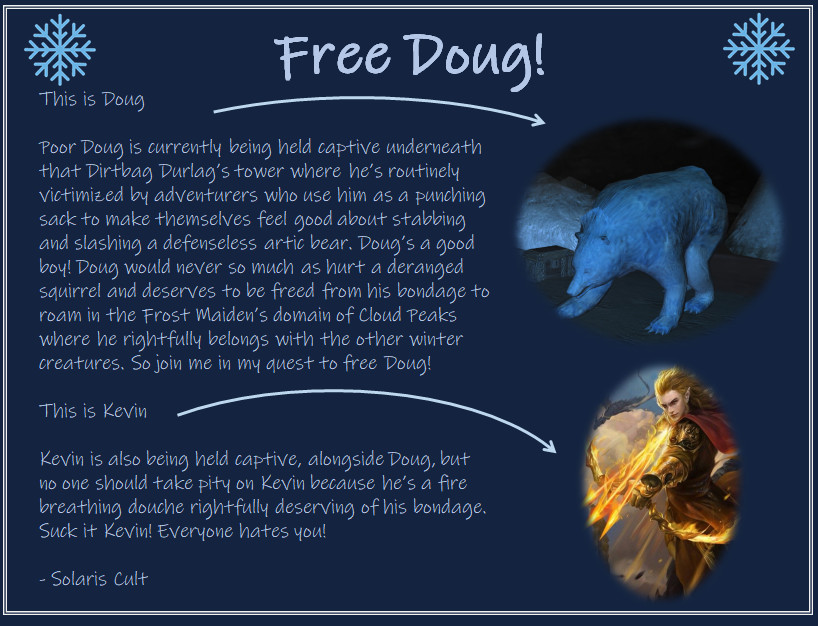 Now begins the tale of Vincent Gabriel Thaddeus III, a.ka. “Vinny”, a.ka. Inthresth Qixiamoiir. So eager was Vinny to free Doug from his captivity and ingratiate himself before the Frost Maiden, so lacking was he in emotional fortitude.

See Vinny was a broken man, still distraught over the lack of a suitable consort and the loss of his animal companion - a ‘Good Boy’ to sure, the ‘Best of Boys’ actually. Adherents of Auril would take rare pity upon Vinny over the loss of his canine companion, encouraging him to shed a tear, or two, or three, to help him dredge through the pain of his loss. 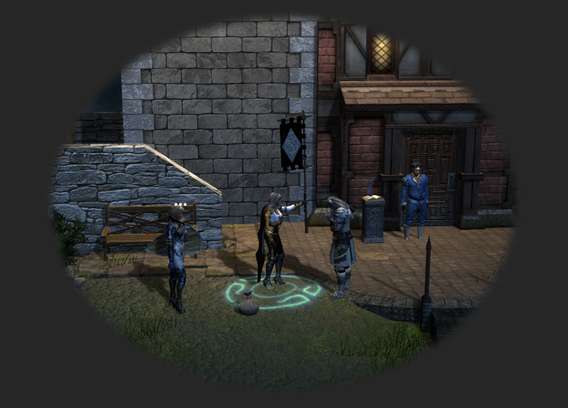 The problem was Vinny’s canine companion wasn’t a canine at all. In fact, his animal companion was that of a horse that he saw fit to consume for inexplicable reasons. To atone for his deception and display of weakness before the sigil of the Frost Maiden, Vinny offered to regale the adherents of Auril by demonstrating his impressive foot agility and the harmonic use of his vocal cords. Delighted, the other disciples of the Frost Maiden would blithely join Vinny in his display of showmanship. 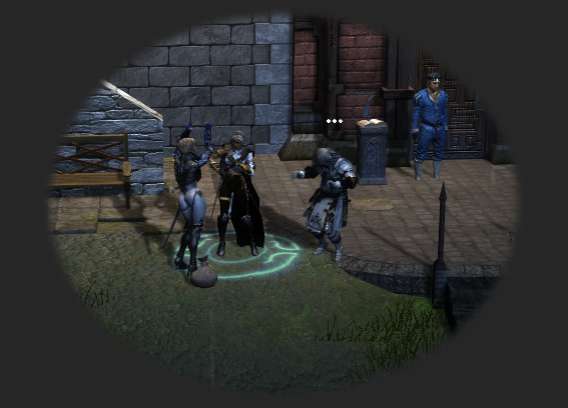 Once again all was right with the world.

As the moon creeps higher and higher into the sky and the freezing wind picks up, a halfling can be seen making his way up the trail to the temple. He is still covered in blood from his most recent trip. Stopping beside the outside alter, he grins as he places the bloody torn robes of a Red Wizard on the alter before making his way inside to see how others have faired during his absence.
Taka-"Grunt"
Top
Post Reply
103 posts