Rumours of the Western Heartlands

Rumours of the Western Heartlands

((OOC Disclaimer: Please use this thread to post rumours from the Western Heartlands.)) 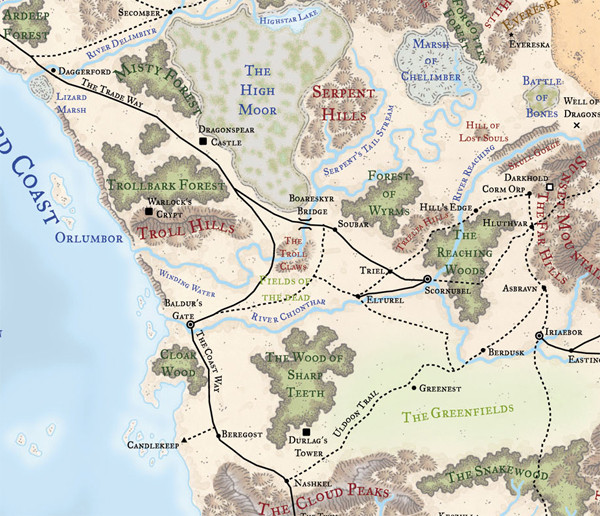 After the events on the 2nd of Kythorn, a masked elf that was part of the expedition into the wasteland returns to the place that used to be the farming community of Tirlis. To those present that ask of his allegiance, he claims to be a follower of Silvanus and goes on to state that he is there to both fulfill his duties as a druid and to nurture the relationships between the Chauntean and Sylvanite faiths.

"The blackest night yields to the brightest dawn." He mutters whilst looking out over the region, standing atop the hill where the desecrating rituals had taken place.

He returns day after day to aid in the healing and regrowth of the lands, working closely with the others present in tending to the needs of soil and plant alike. At times he can be seen speaking quietly to the dryad guarding the blessed tree in the region, the previously sole beacon of hope for the area. True to the ways of his faith and following in it's traditions, he returns the wooden remains of the village to be buried beneath the recovering soil.
Top

sweetlikesplenda wrote: ↑Sun May 29, 2022 2:24 pm Copies are sent via courier to the various temples and taverns in the city, as well as south to Beregost, east as far as Greenest, Easting, and Priapurl, and north along the Trade Way.

The Zhentarim are aligned with the forces of the Underdark! These vile creatures have assembled and marched upon the surface. They commit acts of vile evil upon the peoples who have sent their soldiers north to face the tyrannical Zhentarim. If these Under-Dwelling forces are not put down, there is no telling who will be their next targets. This is a call to any able and willing to protect the victims of these attacks, this is a call to protect your homes from becoming a target.

Any who wish to stand up to these agents of tyranny and destruction, come and gather at Fort Triel. Gold will be allocated to compensate you with equipment, food, and other necessities. Let us show the Zhentarim and their vile Underdark allies that we are not afraid of them, we will not stand by while they raid our homes, and that the Black Network has no place in the Western Heartlands. Any responding to the call that arrive in Fort Triel would be greeted by the Warden at Arms of the Order of the Radiant Heart. Supply bundles would be given, weapons or armor as needed, and some pay for time and travel. These forces would be gathered and begin drilling on fighting as a unit.

On one day as refugees in the north prepare to leave their blighted and hostile areas to safer realms in the southern parts of the Western Heartlands, Asbravn, or further, towards Berdusk and Iriaebor, away from the fighting, the gathering of people and wagons is met by a small force of armored men and women wearing the livery of an organization known on the southern Sword Coast: The Bladestone Fundation.

A large man in a green cloak speaks with the camp organizer as things start to get underway. When questioned about the Bladestone having earlier declared it was not choosing sides, the Headmaster calmly replies,

"We are not choosing sides. We are not fighting in this war. We are not providing support for either side. The side we are on is the side that the Bladestone has always been on: Those people who need to defend themselves from others. Yes, we're a school, but the last few years we have also been about the community of the farms and villages in the area where the Foundation holds its building. Here, like there, we take part to keep those who are traveling hostile roads as safe as possible. We are here for these caravans, not to chase enemy soldiers, report on movements, or anything else. We are here to protect these people who cannot protect themselves as they travel, nothing more."

With that, the Crimson Bulwark of the Southern Swordcoast assigns guards to the various wagons and marching areas of the procession and nods to the caravan master when all is ready to be set out.

ooc:
Posts for RP of guarding caravans approved by DM Ghost, (thanks for your replies, sir!) For those who with to interact, the Bladestone guards will rotate out semi-regularly for caravan duty even though quite far away from their "home base" as it were. The force is 100% purely reactionary and will only combat if they or the caravan they are protecting is attacked, even if opposing forces pass them on the road and give them stink eye but don't take any actions to stop or hinder the caravan.

Due to the DMs being SUPER busy, no exclusive events are planned, just the RP that it's taking place.
Derik "Crimson Bulwark" Ranloss: Thugging for GREAT JUSTICE!!! (yes, I know he doesn't wear red)
Headmaster:Bladestone Foundation.
Owner:The Last Anchor
Braithreachas Leomhainn
"My purpose is to shed blood for those who can't, and to bleed for those who shouldn't."
Top

A team of wainwrights, wheelwrights, carpenters and a blacksmith overseen by a head engineer would make their way from Scornubel via the river Chionthar to Baldur's Gate. They would be escorted by Malakai Stormwind, caravan leader of the Rocky Creek trading company and ranger of the Whitewood Vanguard accompanied too by several of his best caravan guards from the former.

In using the river to travel toward the city, Stormwind and his hired hands would more easily avoid potential undead threats lurking in the Fields of the Dead or raiders preying upon travelers using the roads near the northern boundaries of the Wood of Sharp Teeth. The ship journey would also expedite the travel between the Caravan City and the Gate considerably compared to standard caravan transportation.

Those with mercantile connections in the eastern dwellings of the Heartlands paying attention to such business would hear that the workers have been offered lucrative work contracts to aid the Greenest based trading coster on a temporary basis for purposes of supporting Rocky Creek's existing wainwright in constructing new caravans.

Upon reaching the farmlands outside Baldur's Gate, the hired crafts folk would find accomodations in various inns and taverns and set to work immediately at pace in creating caravans and wagons which remain parked outside Rocky Creek's wainwright's building for later use. As for Stormwind himself, with Rocky Creek's standard operations somewhat halted during the war, the somewhat impatient genasi would be a more readily seen presence around the outer city, keeping a watchful eye over the work operations for the coming months.
~ Malakai Stormwind - Blade of the Winds ~
~ NWN 2: Androoh | UTC & GMT +0 ~
Top

Those traveling along the River Chionthar, near the region of the new bridge construction site by the roads to Greenest and Fort Triel, would note a shape colossal shape that blotted out the sun for a moment. The gleam of light shone from silver scales, as a figure descended along the river. A Dragon of imposing stature transformed in to that of a humanoid woman. A discussion was held amongst the group the Dragon approached. A smaller silver dragon to the other took flight, heading towards Scornubel, before the woman transformed back in to her massive true form, and also took to the sky. It is rumored that a contingent from the Underdark were seen scouting along the bank of the river that borders the Reaching Woods.

Lord Vale and Lord Lyonaler present themselves in Kraak Helzak once more. After being admitted in to t he Throne room of King Dockin Battlehammer, a guest from the Lord's Alliance also arrives. Rumor is the representative sent to the meeting was none other then Lord Khelbern "Blackstaff" of Waterdeep. After some discussion, the three guests of the King leave, the Two Baldurian Lords seems happy or is it optimistic? with the outcome of the meeting. "A proper example is a greater weapon for Good than the sword."
-Aaron Lyonaler
Top
Post Reply
8 posts • Page 1 of 1