by Anti-metagaming
Three suspicious disguised figures rented a room at the second floor of Swordarm Inn tonight. The whole floor was heavily warded with alarm and non-detection spells, making it very difficult to discover the secrets discussed, but some say that the conversation was about tremendous investement into construction of some fascility in one of the Coastal towns.

by Israe
A small boat hits the dock late at night. Off of it steps a female with an elven figure, moonlight catching every razor sharp edge of her Mithril armor as a giant fur coat flutters behind her. She steps off with bold strides, an odd figure to see walking late at night in Roaringshore.

As she strides upon the land she emits a soft sigh of relief, her thoughts racing through her head.

"It has been long since I've walked upon land, hopefully the people have not forgotten me and know to leave me alone. I wonder how long I can go by before someone expects something of me..."

She strides up to the Broken Goblet, removing her helmet and revealing her ebon skin- marred with tattoos and piercing pale eyes with their amber iris's. Long silver hair flowing behind her, her very appearance could be found as terrifying yet beautiful- a face and reputation that is hard to forget. She waits by the front of the inn hoping word of her arrival hits worthy ears soon, yet also hoping her appearance doesn't get her caught up with more missions and responsibilities that she's been eagerly avoiding.

by ShineDown
Another day dawns in Roaringshore. The harbor has filled quickly with small icebergs as it always has each winter and people are taken to milling and mingling indoors much more often than not. Skiffs and rowboats take much longer to reach ship or shore now.

From the crew of The Seawolf, the ship rumored to have gotten the last successful hunt for the season with the taking of The Ladys Luck, comes new word that a sneak thief and stowaway had been caught on board where they had been quickly subdued and dragged below decks for a punishment most cruel. Some suggest it had been a recently spotted dark skinned and silver haired elf who was most involved in the capture. Those with keen eyes could see that The Seawolf, anchored amongst High Admiral Cyrano Ambrosio's fleet in the thick, treacherous drifting ice, did not show any sign of swinging body from her mast as would often be expected.

by electric mayhem
The Frostmaiden's grip takes hold of the region as the winter ice forms in the bay. Sailors finding themselves unable to ply their seaworthy trades on the ocean, migrate to the warmer climates of the taverns.
Inside the Broken Goblet sitting at a table with other shipmates from the renowned Seawolf, Wouveir would overhear some snickering chatter from a nearby table about the Bitch Queen.
Sauntering over to the table, Wouveir would slam a fist onto their table and can be heard berating them.
"Hold fast your tongue sailor, lest it should swell and choke your insolent jibes, dooming them to drown forevermore inside ye."
Turning to address the tavern as a whole.
"Do not let Mother's fury out of your mind ye folk of the sea. For her fury can reach far when she wills it and her memory be long. For those whom turn and dishonor her, thinking themselves safe, take heed, when the ice melts and yeh put back to sea, she will remember."
Letting her worlds hang in the air, she makes her way back to the table shared with her crew-mates as the banter in the tavern slowly resumes.

by Ariexedes
A leather-clad raven-haired female tiefling, is seen every once in a while idle around the goblet or along the docks overseeing the sea wolf in the distance before slowly making her way back to the cart. A small pouch of a verity of gems is left in the alter offering box, inside a few diamonds, sapphires, and topaz, with a small clinking of coins at the bottom. Would Karn see them, he would likely recognize, the gems were the ones he gave Val when they first encountered each other.

DM Solo wrote: ↑
Sat Jan 05, 2019 12:54 pm
Rumour spreads fast that a ghost has taken residence in Roaringshore. Speculation of who it may be differs from person to person. Some say it is High Captain Reynolds seeking revenge on his killer, while others believe this folly, and dismiss any rumours of ghosts at all.

Arriving in Roaringshore a lady wearing a skull mask and a sigil of a black rose would talk amoungst the locals asking about the rumors of the ghost and saying she would be willing to pay handsomely for anyone willing to come forward with relative information on Captain Reynolds or whoever this ghost might be. She look determind to uncover what ever this might be. She would let it be known she could be contacted Via the Inn Keeper at the Swordarmed Inn.

by electric mayhem
Beneath a lean to, around the back of the Goblet, dock urchins would giggle and stare from afar at a construct mechanical being that would wait patiently there from time to time. Only to move on and follow a robed man where-ever he went around the docks. At times, it can be seen helping dock workers move large crates and chests about, all the while the man sitting idly by fiddling and tinkering with small devices.

by Ariexedes
the sounds of water lapping and splashing against the docks and stone for about an hour before dusk sets in. The dark blue hair of a moon elf bobs in and out of the water, shivering deep blue lips shake and tremble as the figure is swimming in a short back and forth line out in the waters of the shore. Before coming back nearly in crawl teeth chattering as they would shatter against the others. Pulling a thick hide around the elven form shaking before looking back out to the sea wolf shaking her head looking back at the water as frost starts to form against rocks where the water was still. She sneezes and quakes again before stumbling down dock back toward the boatman to take her to the ship hair starting to crystallize in the cold.

by XyrisMourn
*In recent nights inhabitants of the 'Shore have been flush with news of the recent hauls of booty and plunder following the changes to the High Admiral's table. However, in the cold misty mornings more sobering events have taken the gleam off their gilded mood.

For the past four mornings a young man or woman has been found arranged in a ritualistic pose, blood drained from numerous small incisions, and sigils daubed upon their pallid dead flesh in their own blood. Long time residents remember the time years back when such sights were commonplace, and pray to the gods that this does not signal a return of the cruel brothers who haunted the 'Shore for years. Others remember the coin they made from the network of information those brothers operated and spy an opportunity.*


DM Solo wrote: ↑
Sat Jan 05, 2019 12:54 pm
Rumour spreads fast that a ghost has taken residence in Roaringshore. Speculation of who it may be differs from person to person. Some say it is High Captain Reynolds seeking revenge on his killer, while others believe this folly, and dismiss any rumours of ghosts at all.

*These rumours of a ghost only feed the wagging tongues, some claiming the two are linked, whilst some few know well enough the truth.* *In other news, a few crystal tokens have been appearing in the hands of 'Shore residents. Mainly used for barter, but some have redeemed them for coin amongst the vendors. It has been a while since such tokens were seen, but these Crystal Moons bring a cruel smile to some faces.*

by ShineDown
As morning comes a longboat filled with sailors armed to the teeth arrives at the docks from The Seawolf. Ten men armed make their way to The Broken Goblet, disappearing into the back rooms. An air unfelt since the drowess Jys was brought in descends on the area. The backroom door is closed and held so. With every knock the door is only parted enough to see who wishes entry. Those with no business are turned away.

by ShineDown
Three men arrive from the armada of ships amassed in the bay, one being High Captain Karn Bjarngrim of the Hellstorm crew. They are met on the windy, cold and wet beach by a horned tiefling woman. With words shared the group make their way up the cliffs side to a waiting pair of wagons. A team of ten armed men make way at the comely horned womans approach.
Opening one she seems to invite them inside, which two do. Minutes pass before they exit and talk quietly before the glimmer of gold makes its appearance. Not coin no, but bars of the stuff. So done the quartermaster of The Seawolf makes back the way he came, leaving the three to themselves. A short while later skiffs begin to arrive and men hurry up, collecting from the wagons their contents in the dark of near midnight. Back and forth go the skiffs from shore to ship until at last the wagons are emptied of everything.

by XyrisMourn
*Dawn's rosy fingers crawl across the Roaringshore harbour, the light revealing the retribution hidden by night's shadows.

Hanging from the gallows on the cliffside is the broken body of a local thug. Though known to be a cruel, vindictive and violent man, the nature of his death indicates that he was the recipient of at least as much pain as he ever dealt himself. A note is pinned to his chest and his thumb pinned to the signature.* by The Whistler
Rolling in the Broken Goblet earlier that day amidst a teeming gaggle of bickering landlubbers the pirate captain known as Karn proudly flaunts a relic greatsword upon his broad back. Claiming to have pried the hallowed blade from the cold fingers of the grandmaster of the Radiant Heart, Karn repeatedly taunts a present knight of the same order who makes a solemn promise to retrieve his liege's blade from the High Captain's corpse. Commander Di'Corvi, also present, vows vengeance for the slain stout of the Northern Watch who seems to have been accompanying grandmaster Arkalis on his fateful trip south.

In spite of tensions running high that evening, the crowd disperses without bloodshed egged on by the warnings of the half elven watchman and the eager looks of Kinane's thugs who were spoiling for a fight with the Gate's lackeys. 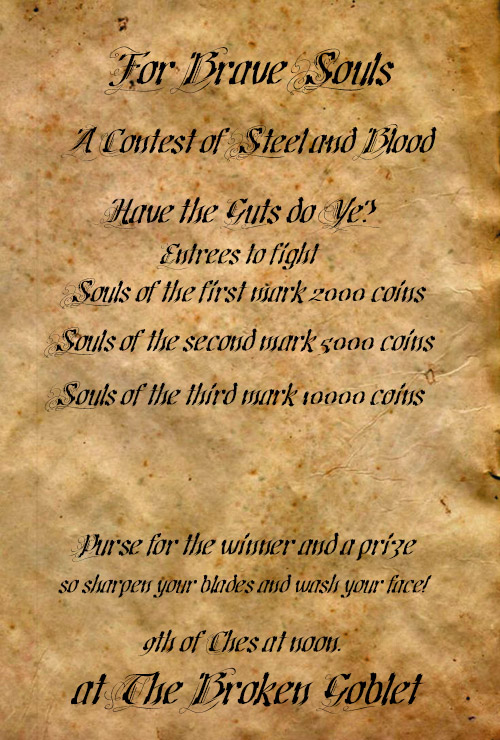 by electric mayhem
Those working the docks on the 1 Ches would note some unusual activity about one of the vessels anchored out in the bay. A young dragon would be noticed to approach rapidly from the South, circling briefly before making a hasty landing on the brigantine. It would leave a short while later.
All times are UTC-04:00
Page 18 of 20
Powered by phpBB® Forum Software © phpBB Limited
https://www.phpbb.com/