A raven-haired teifling wandering about The lands offering some work for those that are tired of sitting about under the threat from the devil raids even defenses and fighting back against them. Mostly asking for stone workers and talented construction workers for now, but more than willing to take on the few that want to fight back against the threat. Mentioning that Soubar is in need of mass to press back against the raids and hoards stilling back from dragon spear before continuing on on the roam, oddly targetting the refugees camp more so. Offering clean beds in a sheltered fortress, food, and drink for their time and efforts.
Alyvire Order of the Radiant Heart Feb '19 - April '20
Aramoria Wysalrth Hellstorm crew Jun '18 -
Makenzie Chersk House Blackrose Jan'20 -
Marmiea Druid Aug '17 -
Valerien Juvriek Selunite Dec '19 - April '20
Valkira Vexx Church of Shar Aug '17 - Dec '18 | Raven's Quill May '19 -
Top

A sketch of a dark haired female face is posted on the notice board outside the Elfsong tavern. On the top right corner a pair of fangs and a series of symbols can be seen
Top

Uranus wrote: ↑
Thu Jan 17, 2019 3:34 pm
A sketch of a dark haired female face is posted on the notice board outside the Elfsong tavern. On the top right corner a pair of fangs and a series of symbols can be seen

After seeing this a hooded man makes his way toward the Palace District with haste...
Top

During the night, the sketch is taken down from the noticeboard.


Uranus wrote: ↑
Thu Jan 17, 2019 3:34 pm
A sketch of a dark haired female face is posted on the notice board outside the Elfsong tavern. On the top right corner a pair of fangs and a series of symbols can be seen

Lobo wrote: ↑
Mon Jan 14, 2019 1:33 pm
A message is pinned to the board outside the Elfsong Tavern. There are a series of random numbers and letters that surround a depiction of a lethargic wolf peering at an unseemly imp.

A sketch of a dark haired female face is posted on the notice board outside the Elfsong tavern. On the top right corner a pair of fangs and a series of symbols can be seen

Over the last few days, a knight errant making his way to and fro from the Temple of Tyr, could be noticed stopping at the bulletin board outside the Elfsong—as it stood alongside his repeated path—and making sketches of the numerous numbers and letters that were upon postings left there. In his copying of the post to a held parchment, he writes descriptions of the drawings.

A day after the last night, the same knight errant can be seen momentarily stopping at the board again, rubbing his chin, and staring at a blank spot left there.

He would eventually move on again to Tyr's Temple, with a pensive, far off gaze upon his face.
Storybuilding

A Messenger would me seen entering the ducal palace with a scroll in hand , He would leave but after a day return. After some time he would depart with another scroll in hand. Rumors have it he was heading for soubar.
Amos Thistle - Lord Regent/Knight of the Blackrose "I am just an extension of her will, i herald the edicts that she issues forth." (Active)

Celeste
Hidden: show
Morgan - "A fractured mind can have the worse consequences."
Top

Flyers would be posted on bulletin boards, along roadsides, and within any establishment that caters to Adventurers.

Phoenix roadside Inn and Adventuring Company is undergoing a recruitment drive. If you are an adventurer or want to be one then we welcome you to apply. We are located just five miles South of Baldurs Gate just across the bridge and down the hill from the hilltop ruins. You cant miss it. Come wet your adventuring habit as well as your thirst at the Inn.
Terri Lalani
Council of Phoenix Company
Top

Word is spread about a recent announcement from the Halls of Inner Light:

The Halls of Inner Light would like to make an announcement of that a Midwinter ball will be held at the Ducal Palace's ballroom in a tenday. It is aimed to be celebration to mark the midpoint of winter as well as a charity event, with donations going towards building gardens in the Palace District. War memorials will be beautified so as to better honour those who have given their all for Baldur's Gate. Tickets will be available at the door. Further details will be given in days to come.

The Halls of Inner Light are looking for skilled performers as well as sponsors to the event.

Furthermore, worshippers of Lliira are also sought to partake in the Swords Cast Down ritual. 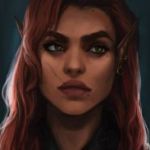 Cinta wrote: ↑
Wed Jan 23, 2019 5:16 pm
An acolyte hurries through the main square of the East Gate district, and pins a scroll on the bulletin board.

Description of job: expect anything.
Payment: gold or other curiosities, based on discussion.
Warning: applicants will be thoroughly interviewed, no half-hearted loiterer will be accepted! Confidential treatment of any task is expected.
Her power lies in her secrets.

Apply for the job in the Church of Mystra.
Hidden: show
OOC: Aimed for low level characters. PM me here if you can't find me ingame!

A man dressed in black and with a top hat named Horlon was talking about a Yellow Light he saw at the gnoll cave at the Blushin Mermaid tavern, killing gnolls, he says this Yellow Light looked at him and then went away, he says another adventurer who goes by the name of sVeck also saw it.
Top

From now on different people associated with or known to be Bladestone Foundation lecturers start making their way into Baldur's Gate daily with morning and evening alternating times. Their goal the Flaming Fist headquarters after which they can be seen teaching and practicing with the Flaming Fist and Watch forces. Those people will variously be Derik Ranloss, Kayle, Lylan'Synor Syr'Asiryn and Niyressa Dawncrow. 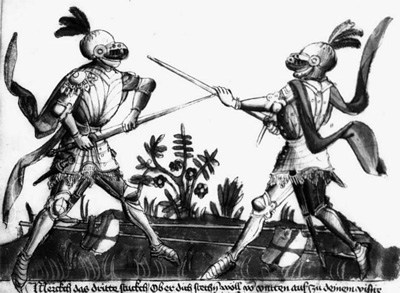 Last edited by DiceyCZ on Mon Feb 04, 2019 5:28 am, edited 1 time in total.
Niyressa Dawncrow (bio) - House Vale Magus
"Magic is Chaos, Art, and Science. It is a curse, a blessing, and progress. It all depends on who uses magic, how they use it, and to what purpose. And magic is everywhere. All around us.” - Yennefer
Top 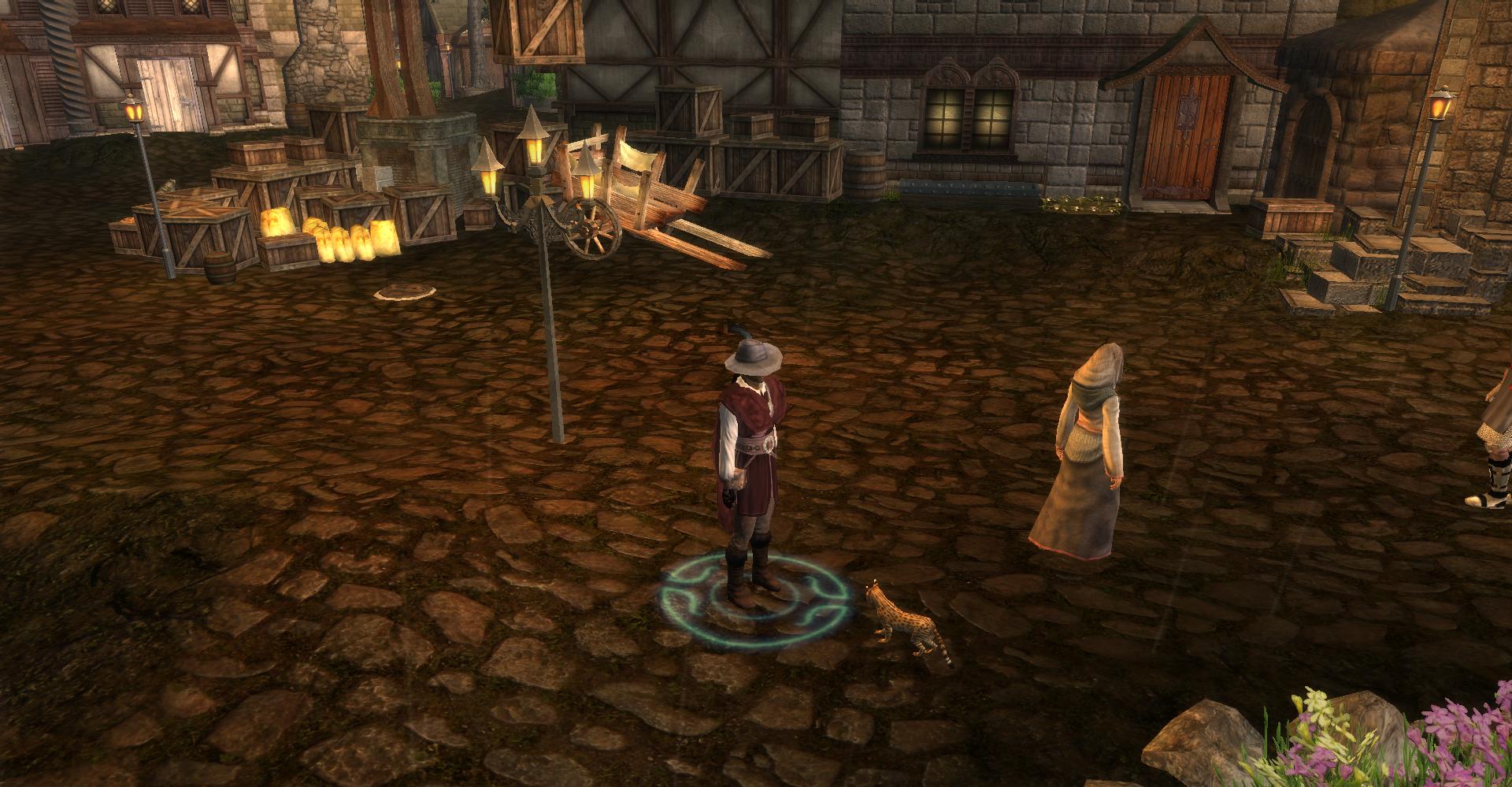 
Glowfire wrote: ↑
Thu Jan 31, 2019 2:03 pm
A proper announcement about the Midwinter Charity Ball is put up within the Halls of Inner Light and sent out to various groups and organizations. 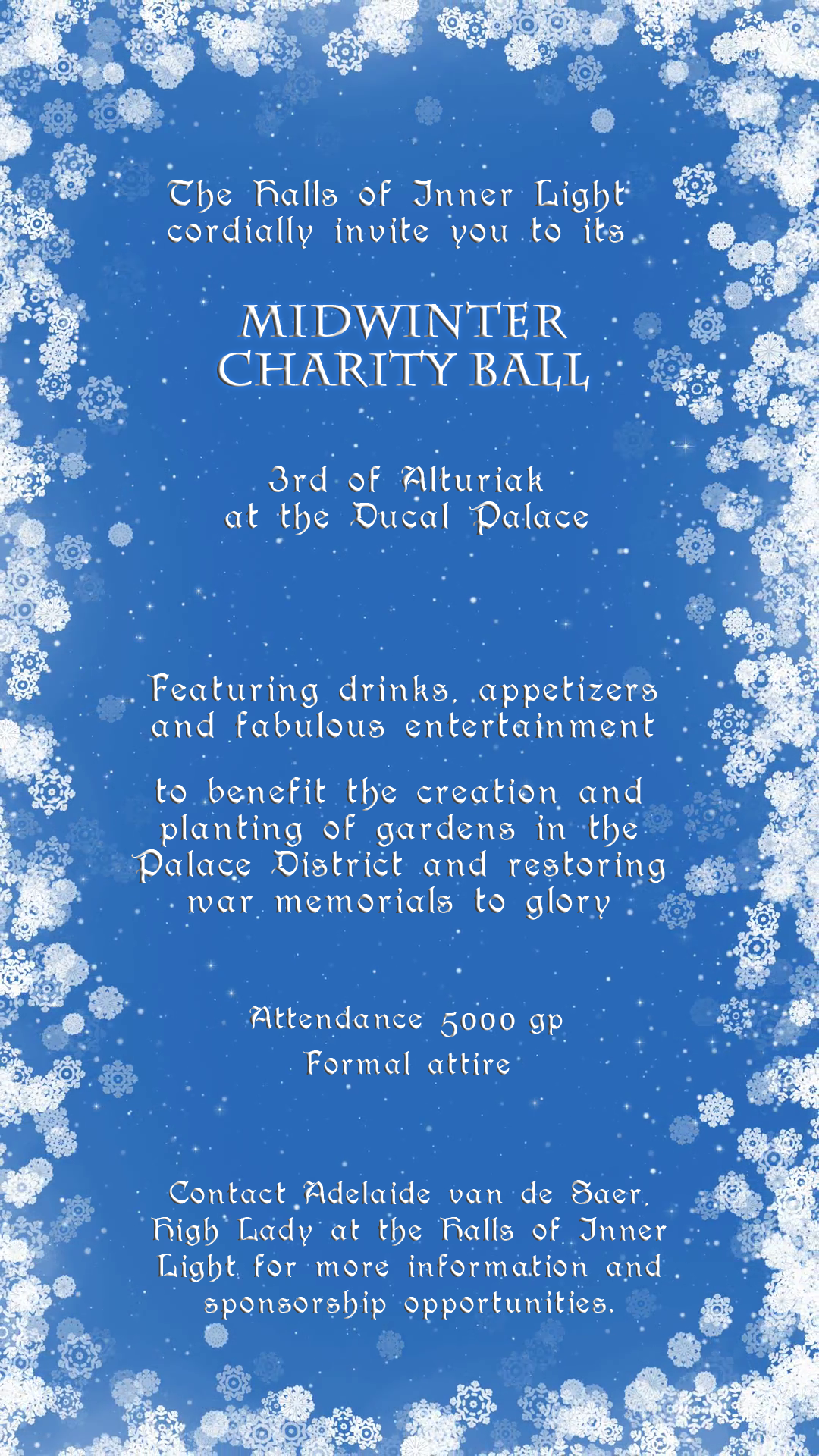 //OOC: Sunday 3rd February at 20:00 GMT.
Ducal Palace is in the Palace District. Attendance paid at the door.

Anyone who can cover attendance and is dressed adequately are welcome! Rumour would state that armor is not considered formal wear!

A Flaming Fist courier is seen rushing into the Minstrel's Muse in the Harbor.

Not long after that, noises and commotion begin in the Warehouse, as a number of workers from the docks rush inside the building, which closes for business for a few hours.

A blond man in elaborate red and gold armor escorts a large number of workers and wagons out of the House Darius warehouse in the Harbor, amidst the movement of numerous siege weapons under the direction of Fingal Darius and members of the Flaming Fist.

The Flaming Fist courier departs with the caravan and is immediately seen breaking off to head to the Ducal Palace.
Last edited by Winterborne on Fri Feb 01, 2019 4:34 am, edited 1 time in total.
Nathan Goldenmane - Knife Fighter of Sune Members of the Golden Wheel and Golden Arrow companies were seen in the Blade and Stars Inn for a business meeting. It would be said that the two left in joyous moods with possible ventures on the horizon for both
Top
Post Reply
1615 posts