Those damned whispers! Try as he might, he could not find where it came from. And now a shiver, one that stops him in his tracks. He is not far from the edge of the woods now. But something catches his glimpse in the distance. A glimmer. And with the glimmer, the whispers grew louder. He'd decided on ignoring the voices...and the box. A box? The golden box that lay before him in the rubble, with black trim and several runes. He looked back to the spot in the distance where he'd been standing, wondering when he'd started approaching the source of the glimmer. He must have wanted to see what's inside...the echoing voices made sure to remind him of that. He can't seem to decide what to do, even though he found the box overwhelmingly tempting...and so fine to the touch. The touch? He finds his hands holding the thing up, feeling it with his fingers as its lid slowly opened. His thoughts of the when and the how was cut short as something suddenly reaches out of the box to pull him in. And all was completely quiet....

He gasps for breath as he wakes up. Heart stammering and drenched in sweat, he props himself up on one elbow to take stock of his surroundings. Finding himself on a bed in the cabin, he wipes the sweat off his brow as he moves to sit on the edge of the bed. With hands over his head and elbows up on knees, he decides there will be no more sleep tonight. "By Mielikki..."
Lambe Arkolyn - Memoirs of a Ranger - Lonesome Watch - Portrait
Top 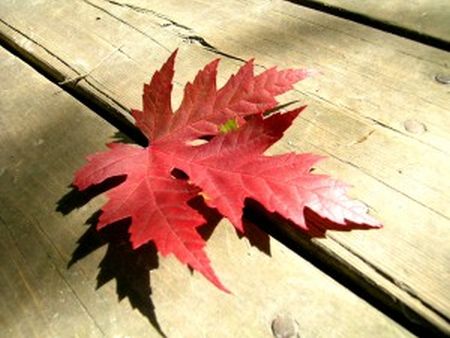 In various inns around the Swordcoast leaves can be seen with the following text written on it:
"Hello
rangers and
followers of nature,

if you are new to the area or you are looking for like-minded
people in this region,
I will offer you
my help.

Leave a note for "Vendor Xon" at the Friendly Arm Inn or at one of the shrines along the tradeway.


A mining expedition never return home to East Gate. It appears they were attacked by lizardmen, details however are vague at best. The dwarf miners were not missed for over a fortnight and are now presumed dead. Wagons were found in Cloakwood forest but no bodies were ever recovered. Two adventures that were acting as guards are also missing and possibly dead.

Admorin updates the Circle with a rumour he stumbles across during his patrol of the river.

BehindTheCurtain wrote:Those that travel the road between the Friendly Arm Inn and Beregost would stumble upon a bloody scene right infront of a shrine dedicated to Mielikki. Several humanoid corpses with their throats slit wide opened defile the pilgrimage site. They must have been used as some sort of sacrifice as the nearby altar is drowned in their blood ...

A shimmering, pitch black disk with a purple border would hover above the altar ... the holy symbol of Shar, the lady of loss as some may be able to recognise ...

The way in which the shrine has been defiled is very similiar to the defiled shrine of Silvanus north of the Friendly Arm Inn not long ago ...

Examining the area with magical means would reveal nothing unless fueled by the Shadow Weave ... those that search for any magical trails left using Shars weave would find a hidden message within the complex construct of magic ... weak ... barely tangible ...

((If your PC casts a detect magic or similiar with the use of the Shadow Weave please PM me! Thanks to Creo once again for setting up some corpses for me!))

The ranger Vendor Xon has observed the sacred shrine of Mielikki for several hours yet. From a far distance he had seen the remains of the desecration. But now it was time to clean up the mess. 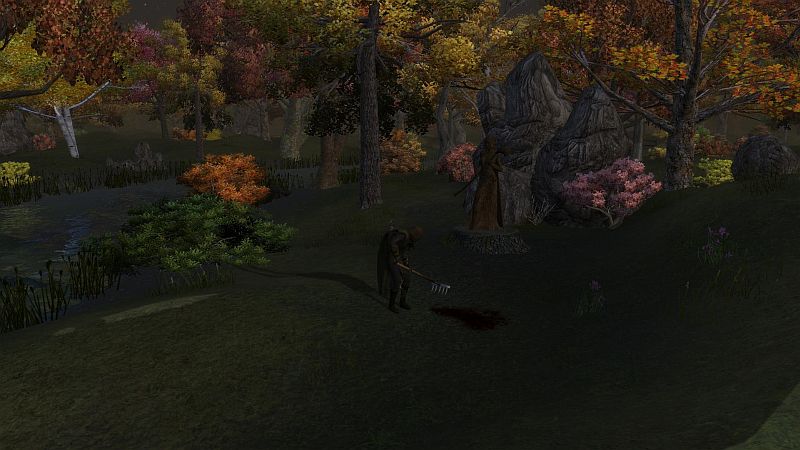 After he searched the area for any track or other hints that would lead him to the perpetrator, he started the cleaning. While shouting prayers to the Forest Queen he destroyed the dark altar with his blessed weapons. 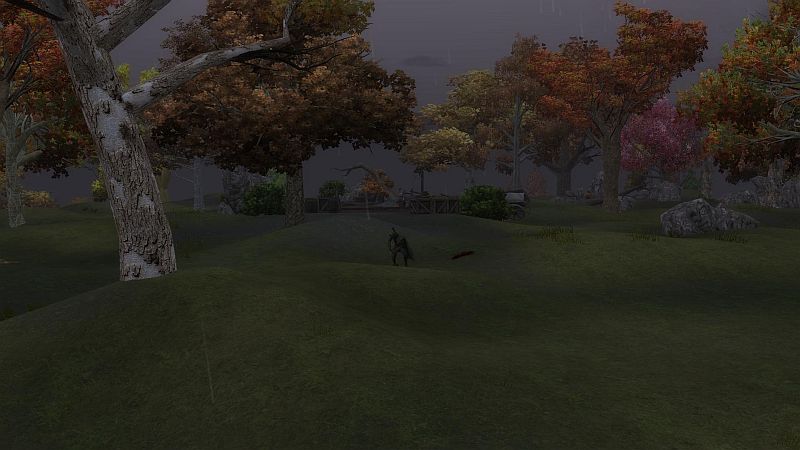 Then he piled up the corpses to burry and pray for them later somewhere else. He removed the remains of the altar and the bloodstained soil, sowed seeds of wild plants and watered the place with blessed water. 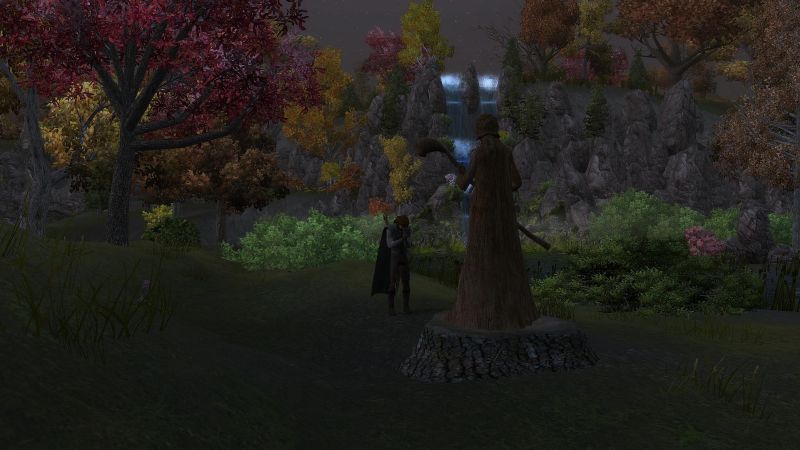 After he was done he spoke a last prayer to the Daughter to Silvanus, the Supreme Ranger!
Images of a Lumberjack called Vendor Xon//Caution Many Pics
Top 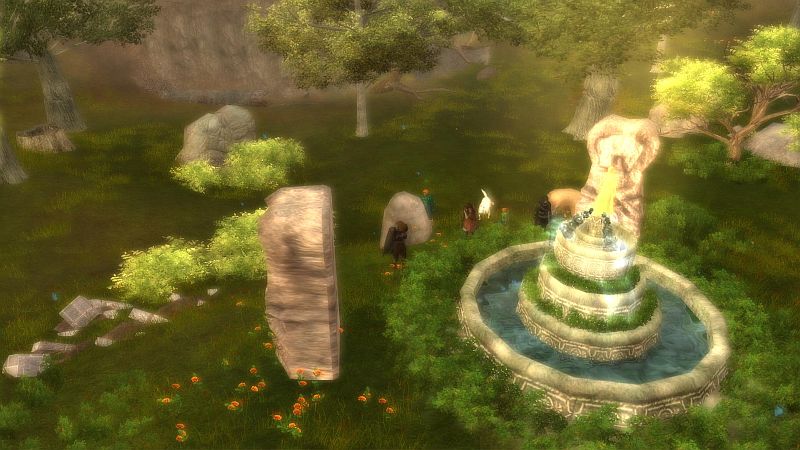 Druids and rangers of the Elder Circle traveled to the Reaching Woods. After High Ranger Vendor Xon prayed and High Druidess Nai communed with nature, they hunted some of the numerous gnolls around the Waterfall. These nasty creatures used necromancy, and one of them was a half-fiend.

During the hunt an elven woman and an aasimar were thrown through two randomly appearing portals. They took them back to the Shrine of Eldath, as it is the only safe place around. Many animals had gathered at the shrine. The two strangers told of shadows and three female statues. 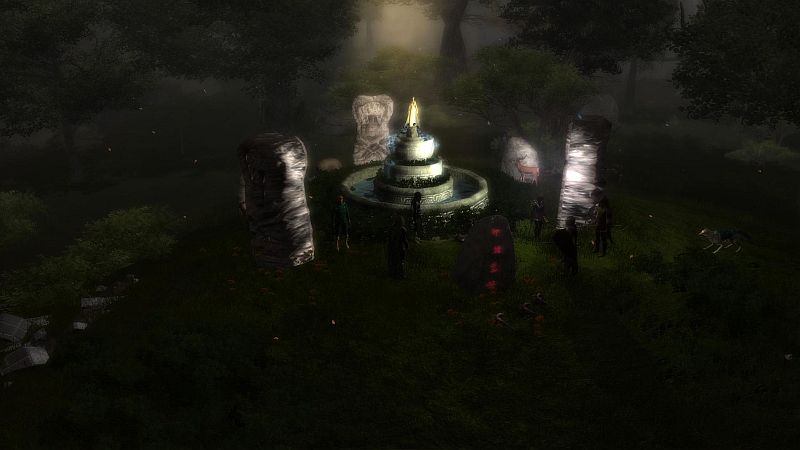 They had found them as they explored the Hill Ruins at the Wyrm's Crossing together with some other adventurers. The shadows attacked the group and both found themselves right in the center of the Circle. Nai, Lambe, Kali and the two strangers traveled back to Baldur's Gate to search for the other companions. 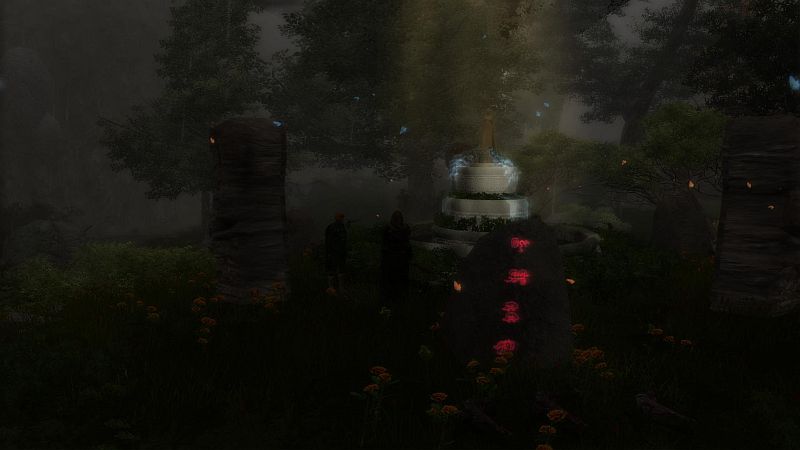 Ven and Admorin remained in the Reaching Woods. They planted acorns around the area where the fire had burned the forest a tenday ago.
Images of a Lumberjack called Vendor Xon//Caution Many Pics
Top 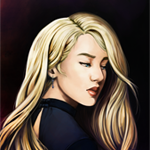 A missive addressed to "Ranger Vendor Xon" makes its way towards its recipient.
The point of origin shows as "Office of the Guide, Candlekeep."
Top

The shrine to Silvanus south of Wyrm's Crossing has been well tended in recent weeks. Every few days a new offering appears in the shape of deadfall lovingly carved into small animal figures. Bandits have learned to avoid that particular shrine, after several of their number fell to some unseen assailant while wandering that way. In time a single leaf is left beneath the statue, enchanted with a whisper of primal magic. It bears the message:


Followers of the Oak Father and the Forest Queen. I walk these paths and I would be your ally. Erlendir Ravensong, Ranger of Solonor Thelandira.
Erlendir Ravensong: Ranger, protector and guide - bio
Tasia Sphaerideion: Bounty hunter, scout and sailor - bio
Kiartan Exiled: Mercenary, exile and son of a traitor - bio
Top

*The next time Erlendir visits the shrine of Silvanus, he would find a second leaf attached to his own. A small message is written on it*
Erlendir,
it is good to see,
that you walk the path of nature and I can tell you,
that you are not alone. I am a ranger of Mielikki. If you like, we can meet at one of the shrines
along the trade way or at the Friendly Arm Inn.
Just ask around for
Vendor Xon.
Images of a Lumberjack called Vendor Xon//Caution Many Pics
Top

Erlendir smiles to himself when he finds the reply and makes regular visits to the shrines of Silvanus and Mielikki in the hope of meeting Vendor.

///My playtimes are kind of awkward, usually 2-5:30pm EST a few days a week, but hopefully we can meet up IG. Though if you're GMT+1 I guess that's evenings.
Erlendir Ravensong: Ranger, protector and guide - bio
Tasia Sphaerideion: Bounty hunter, scout and sailor - bio
Kiartan Exiled: Mercenary, exile and son of a traitor - bio
Top

SeedsOfDoubt wrote:*Nai and Mendel go to Triel to inspect and commune with the land. They try to get an idea if the land has healed enough to support life and crops once again. Mendel trys to keep Nai calm as she growls at the soldiers grumbling about their tents killing the newly grown grass.* 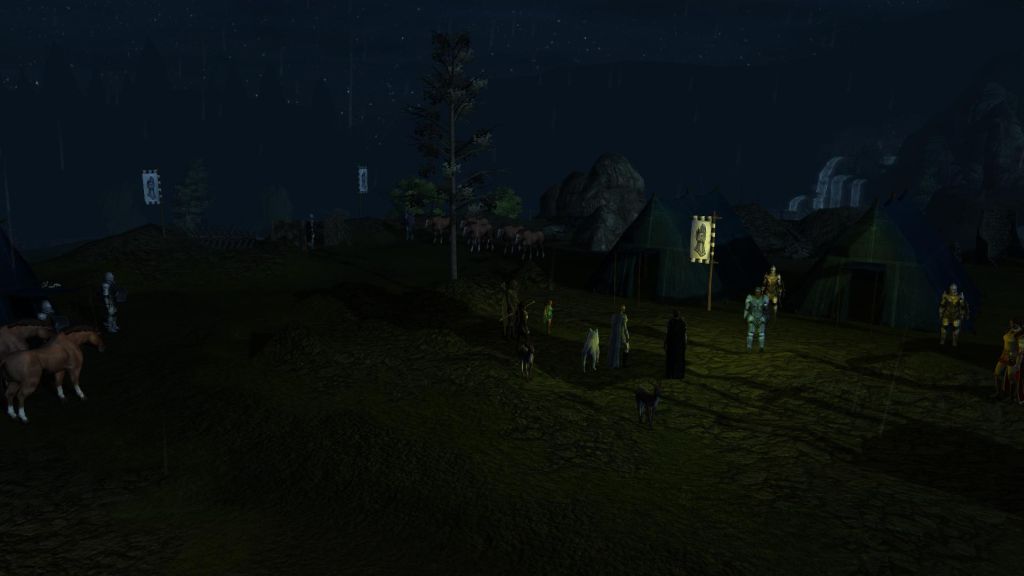 The rangers and High Druidess Nai meet with the commander of the Hellriders at Triel.
Images of a Lumberjack called Vendor Xon//Caution Many Pics
Top 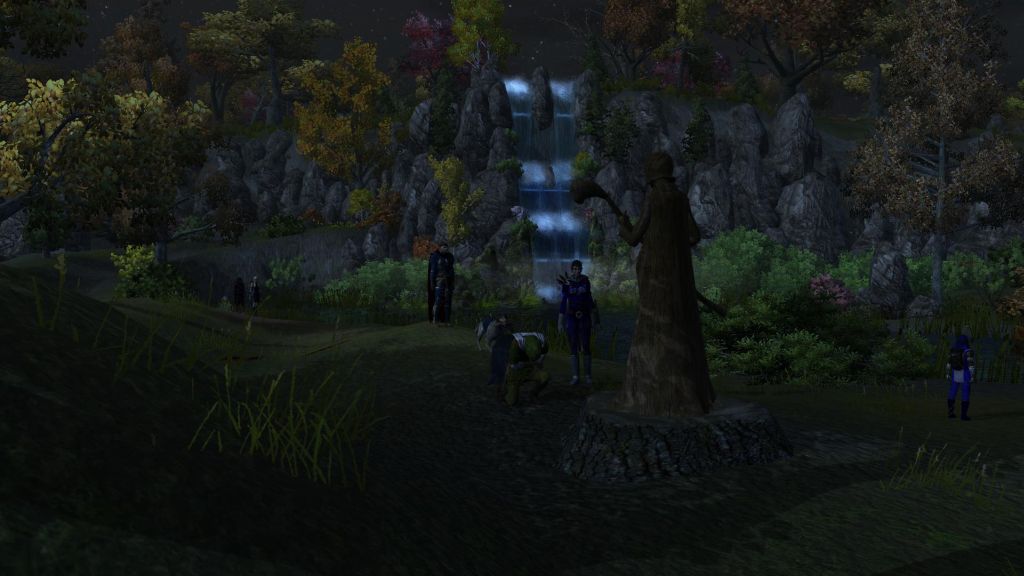 Ven leads some new friends to the shrine of Mielikki.
Images of a Lumberjack called Vendor Xon//Caution Many Pics
Top 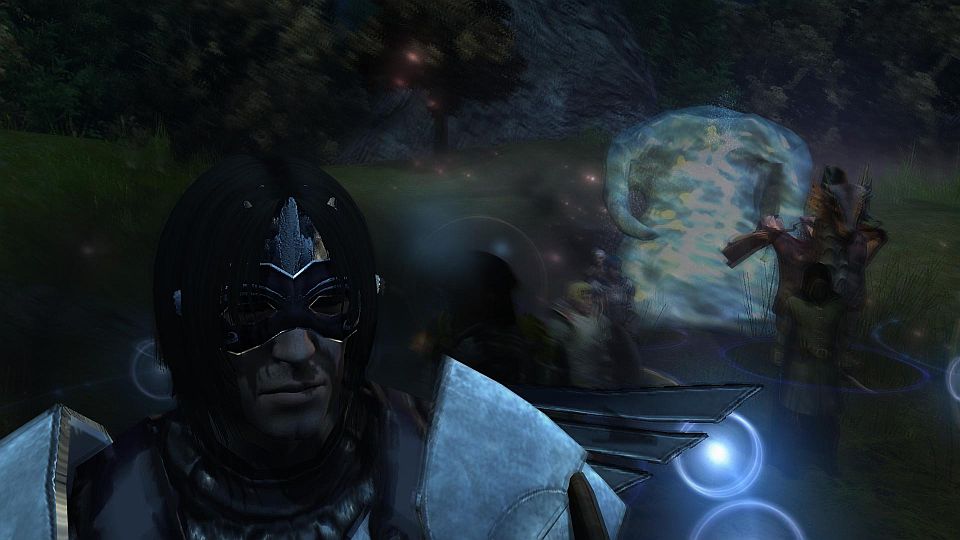 Bran lead the Seekers and Readers from Candle Keep into the Cloakwood to find the Shadow Rift. The Candle Keep Guard, Morninglords of Lathander and the Elder Circle escorted them to a place with huge trees. The forest creatures around the area were tainted and attacked. The party fought the pixies and dryads back into the thick forest, where dark shadows lurked. Evoked fireballs and storms blasted the shadows away.
After all minions of the Fey Queen of Air and Darkness were destroyed, Sirion, Vendor and Nai summoned water elementals and extinguished the remaining fires. The rangers and seekers searched for the rift. It took not much time until Mendel found the many tracks that lead to a dark looking cave. They entered alltogether. 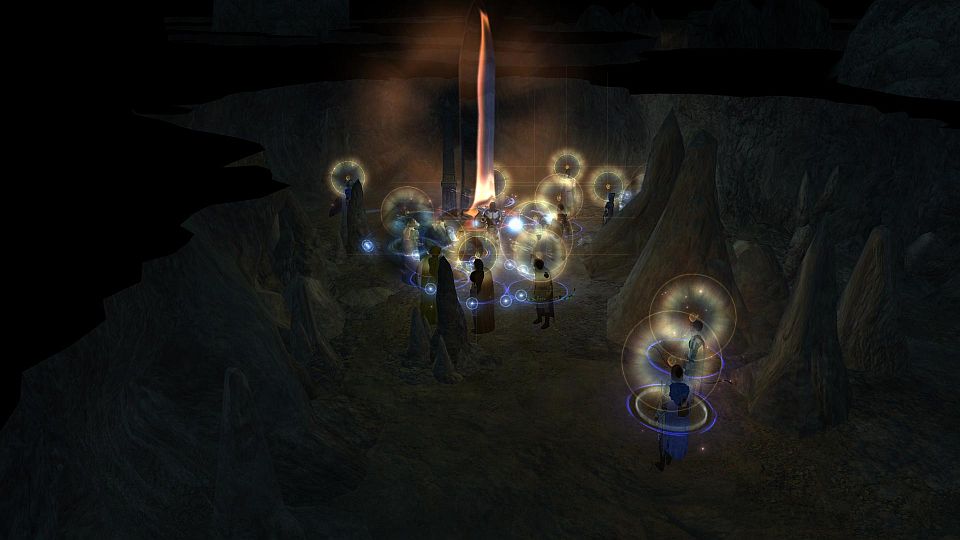 The cave was full off shadows and tainted creatures of the forest, huge and wide enough for a feral dragon druid like Nai. Uniefied they fought their way deeper into the cave. They were slowded down by some wounded comapions. But finally all made it to the main cave, where a huge, unseelie, giant dog defended the portal. But against the large number of intruders the creature couldn't stand very long.
After it fell, Bran and the Seekers didn't hesitate to examine the rift, that was opened between two pillars. Some really thought about entering the portal, some shot arrows and other things into it, before the portal was finally closed. After it was done, one part of the party left the cave to find the Black Oak. The other stayed to destroy the pillars. Soon they found the remains of the Black Oak. The tree wasn't in Cloakwood. It was outside, a few miles to the south of the forest in the wildlands. Bones and corpses of many creatures surrounded it. The soil and the almost dead tree were corrupted. So High Druidess Nai made a decision, and they burned down the remains and consecrated the soil. New life will flourish soon. Ven spoke, "Guarded like a dragon’s hoard, A forest doth expire. Life reborn and enduring, Is wrought by gilded fire." 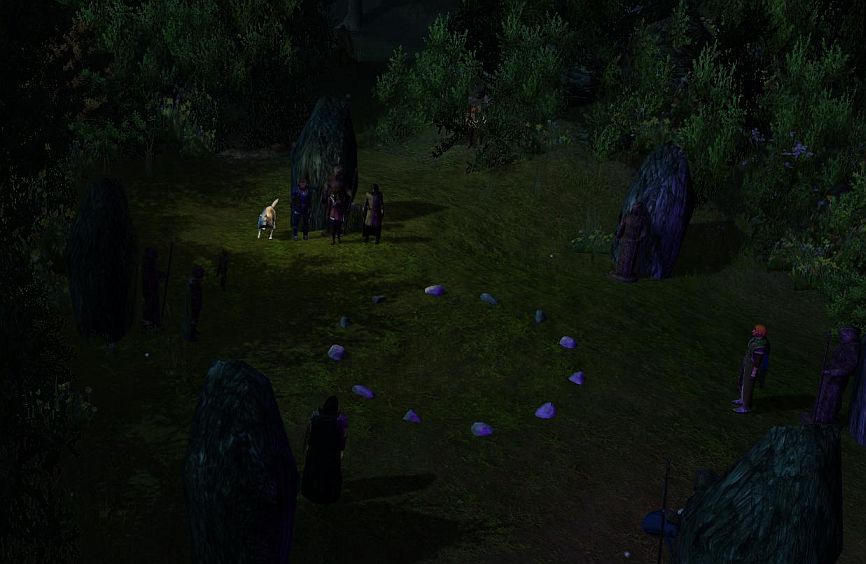 A public meeting was held at the druidic circle near the Lions Way.
Images of a Lumberjack called Vendor Xon//Caution Many Pics
Top

A druid leaves a message upon each of the nature deities' shrines in the region. It is a message of good will and expresses a desire to meet with ambassadors of the Elder Circle. The messages originate from the druidess Amaranthe and seem to indicate that she will often make the rounds of the shrines to look for a reply.
A M A R A N T H E
❈ The streamlet’s gentle side it seeks, the silent fount, the shaded grot;
And sweetly to the heart it speaks: forget-me-not, forget-me-not.
Top
Post Reply
234 posts