I Maim Zau'afin, come to raise my family, and serve the Dark Mother

I Maim Zau'afin, come to raise my family, and serve the Dark Mother 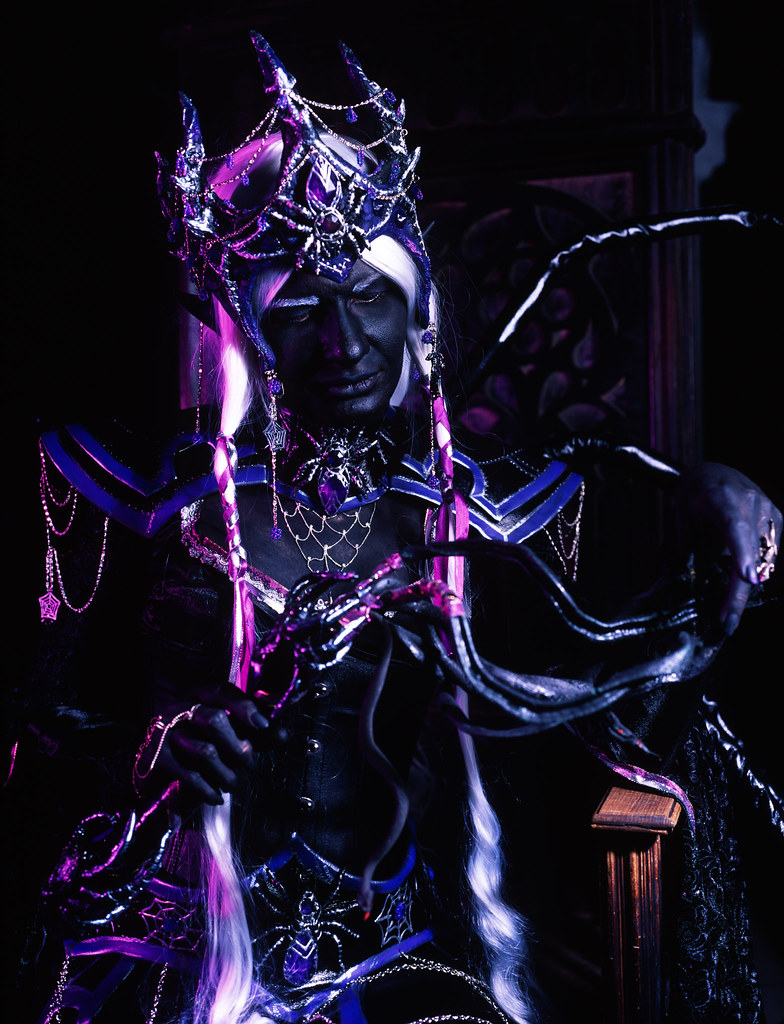 Matron Maim sits on her thrown, flanked by the elite guards of Zau'afin, her thoughts are her own, but Malla Lolth hears them, because she is one with her.

"So many believe they know what it is to be a leader of a great house and to be a Yathrin. But they are fools because they have not studied in depth and live their lives in conceit that only those dominant and overtly powerful can lead. They only superficially understand the will of Lolth for her people. It is only one thing and one thing that leads to survival, to have a family and to test that family. Some believe that you first must test, then have a family. Some believe that family is a natural creation to be taken for granted. It is naut. The Dark Mother birthed her children to make more of themselves, in her image, but also numerous to wage war on those she hates. Hatred is the curse of Lolth upon her faithful for she hates all, including her own at times. And this is unkown to most Yathrin who do not understand the Dark Mother. She is an embodiement of feminin hate, but she is jealous of her hate. No one may hate more then her. Only she may have the last word. And so she always will. Those who believe that demonstrations of filial affections and respect are signs of weakness simply do not understand the dualism of being a female and Yathrin in drow society. Nor do they understand the Dark Mother. But I do. It is easy to hate, but it is difficult to love your children so that they can grow strong, only to love Malla Lolth more, to the point of even hating your own children. This is a difficult thing, but necessary."

Sipping some fine wine from a globlet Matron Maim's eyes go distant and she gets lost in thought, "My mother Eclav was one of the most ferocious and hateful old spiders ever birthed in the underdark. From her came Matron Eloril, Matron Nil'Kah, Matron Ginthrae, Matron Lomith, and finally myself. It was her hate that drove her to madness. And in that madness, she lost the willl to live with purpose. She surrendered to the darkness of the wilds. Her fate is still uknown. But it was Dilarra's attentions that kept her alive. Why Dilarra would do so is beyond me, based on how she was treated by Zau'afin and Eclav, but had she not I would never have been birthed and raised. I would never be sitting here, attempting to raise my own children and family. I have my brother Bardax, sister Nefara, my daughter Dirza, and of course Dilarra, my war mentor."

A gleam of anger passes her eyes unseen by the drow guards in the chamber and she continues to think about her present situation, "I would still have Seldszez my Yath'sarglitin son and my Bae'queshell trained daughter Filfstra, had naut Lomith and Vierdra abandoned Zau'afin to chase after the Moon Strumpets! How could the name of Zau'afin be so marred, and for what, for the hypocritical self-righteousness of a weak Goddess and her heretical petulant followers who spend their time hating their culture and the hardness of the Dark Mother? Vithers! All they do is prattle on about how evil the Yathrin are, when it is the Yathrin who bring stability to drow society and make it strong, and allow them to survive in the harshness of the underdark. I gave Lomith a chance to return, but she would naut. She cursed my son Selsdzez to his face, already humiliated by the task I sent him on to give mercy to the fallen Matron. By the blood of my own children, who I reared with tears and toil, trained skillfully, did I avert the just wrath of Lolth. Malla Lolth requires obedience so that she can be confident and sure of the trustworthiness of her Qu'ellars, who I believe she needs to make war on the children of her enemies." 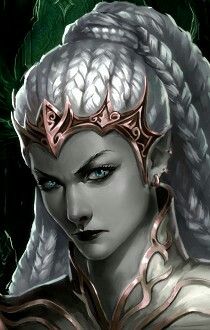 Closing her eyes Maim visualizes her daughter Dirza and muses, "My daughter Dirza is angry at me for sacrificing her older brother and sister. Yet she understands the reasons. I could not ask for a better daughter. But her anger is great. I can sense it. I feel that because of these actions, she is at risk of falling into the ways of my mother Eclav. Her heart burns in hatred for the Moon Strumpets who contaminated the purity of Zau'afin, drew away our Matron, which caused the death of her siblings. I would stay her hand for the greater purpose of my plans, but if I do not let her empty out her rage, she will make mistakes in the coming war with the surface faries. What can I do as her mother but pray that she passes all of Lolth's tests?"

A small sigh escapes Matron Maim's mouth as she delves into her regretful thoughts, "If only it was Bardax and naut my children who were worthy sacrifices. I would have gladly placed him on the altar and sacrificed him. All the Zau'afin secrets he has revealed when his belly was full of ale. How he managed to kill every Velg'larn and merceny sent to kill him for his loose lips I will never know. Perhaps he is not the fool I take him for, or perhaps more skillfull. We do naut always choose our family or our enemies, but our useful allies I would like to think we do. And I have too few of those at this time and it frustrates me to no end. I will have to make do with Bardax for now. I wonder if I should make him a dreadguard for Yathrin Axsa, who has prooved exceedingly capable and diligent in her duties. Would she accept such a slack mouthed fool as her trusted dreadguard, who would only obey her orders and mine? And what of Bae'queshell Malodia, she has many plans and plots, and I am eager to see what she does." 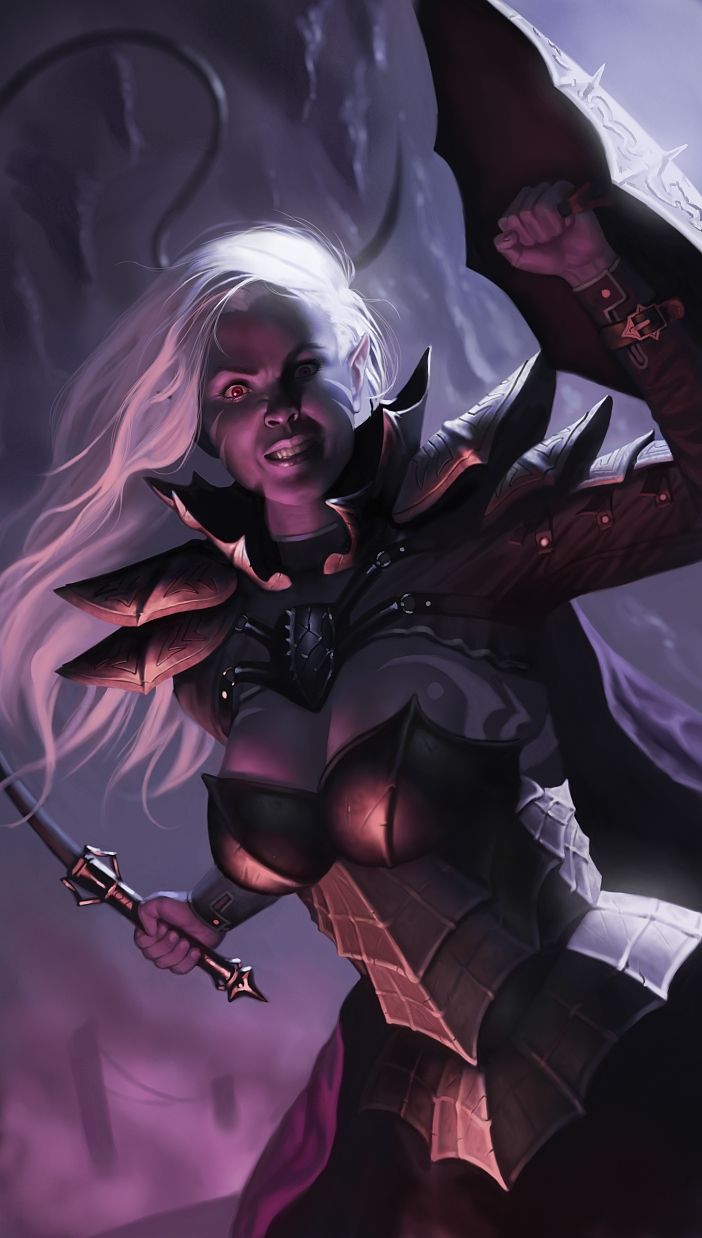 Taking a final sip before getting up from her thrown Maim impatiently considers something that has been bothering her, "Nefara tells me she has almost mastered the forbidden faerl she needs to make Zau'afin uniquely ready to strike out in war. An advantage we need to pass our troops quickly to where they need to be, striking fear and death upon the accursed surface faries. But even if she were ready tomorrow, we still do naut yet have enough nobles for our once great house to wage war. To do so now would court disaster." Getting up from her throne, Matron Maim makes her way to her private quarters, where Dilarra Zau'afin guards her from the shadows, in the corner of her room. Unseen and unheard, Dilarra too muses over the history of Zau'afin. A house where she has served every Matron from the beginning. She has heard the whispers of war preperations from the other sarglitin. She too is getting ready to spread the power, fear, and influence for Zau'afin. But she will naut do it for Malla Lolth, she will do it for Zau'afin, and for her Matron. 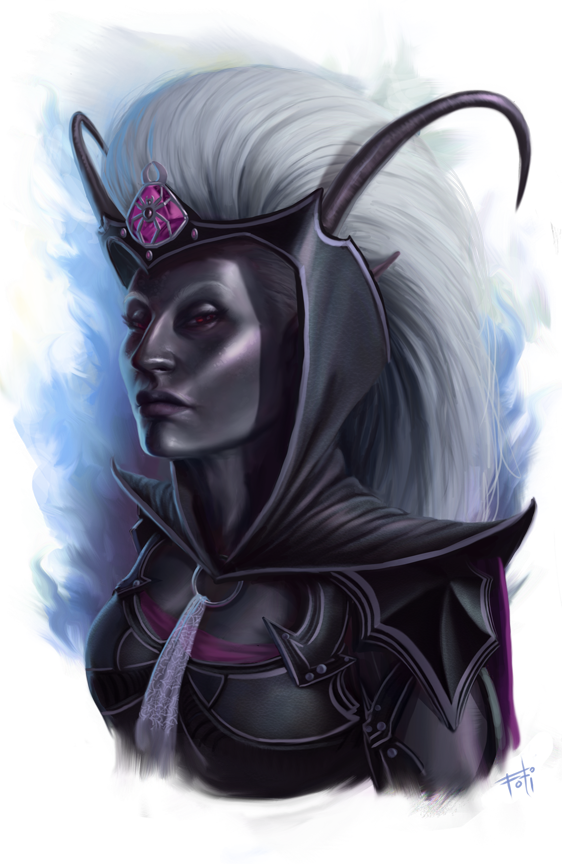 Matron Maim Zau'afin
12 I will make your battlements of rubies,
your gates of sparkling jewels,
and all your walls of precious stones.
Top

Re: I Maim Zau'afin, come to raise my family, and serve the Dark Mother

Sitting on her throne her eyes narrow, seemingly only seeing the ground a few feet before her, the shadows move enough to catch her attention. 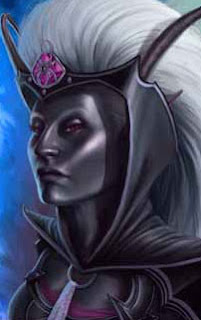 To her guards Matron Maim imperiously states, "Leave us." The elite Zau'afin guards leave the chamber while the spiders hovering about her throne, sensing the impatience in the Matron, scurry up the webs behind the throne of the Ilharess of Zau'afin.

Kneeling before her, in reverence and respect, the former first Dreadguard kneels but says nothing, waiting for her Matron's command.

"Report Dilarra. What have you been up to then?," asks Matron Maim, her eyes still narrow, but now in line with the lowered head of Dilarra.

Dilarra states matter of factly, "Maim, I have completed all the tasks you have requested of me. And I have not been detected. I have found two settlements, and have also discovered and explored Baldur's Gate and many other places on the surface. I have drawn up the maps and will provide them to Yathrin Axsa, Yathrin Zar'shalee, and your sister Nefara."

"Bwael. When the time comes, they will be better able to act then. And what of your training? Is it complete?," asks Maim.

"Xas Matron, I am now at full strength," says Dilarra matter of factly.

"You suprise me Dilarra. You are the longest lived of all Zau'afin, and you still refuse to be defeated. Neither by illness, age, or the the senescence of our house," says Maim dryly.

Chuckling Dlarra retorts, "Do you need to hear more stories of the glory days of Zau'afin my Matron?"

"Nau, I have accepted the reality of what Zau'afin has become. A house disorganized and unwilling to rise to greatness. I am pleased by Yathrin Axsa the most, and though reports are that Yathrin Zar'shalee has the respect of Bregan and is acting competently, she still has naut learned her place. Malodia's pride has yet to fully heal from her punishment, but she is becoming stronger," says Maim with a wry smile.

"They do naut realize Matron that to lead they first must learn to follow. Pride is thier weakness and it always leads to failure," responds Dilarra mirroring the thoughts of the Matron, whom she raised since a small child.

"That is so. But even if they rise to their full potentials, Zau'afin is naut ready to begin seeking Lolth's vengeance. We lack enough skilled nobles," says Matron Maim with a sigh.

"Perhaps it is naut the destiny of Zau'afin to rise again to it's former glory Matron. You will have to content yourself as a wealthy Matron living a life of luxury," says Dilarra with a hint of sarcasm.

"That would be a great sadness and defeat for me Dilarra. You are so cruel," taunts Matron Maim. "Let us review these maps and locations you have discovered Dilly," commands the Matron. Standing up Matron Maim walks over to a table where Dilarra begins to unfold several maps. The pictures of many giant trees rise prominently on one map, on another a large settlement divided by a river, and on a third map a strange city by the coast with one single large gate as an entry point. 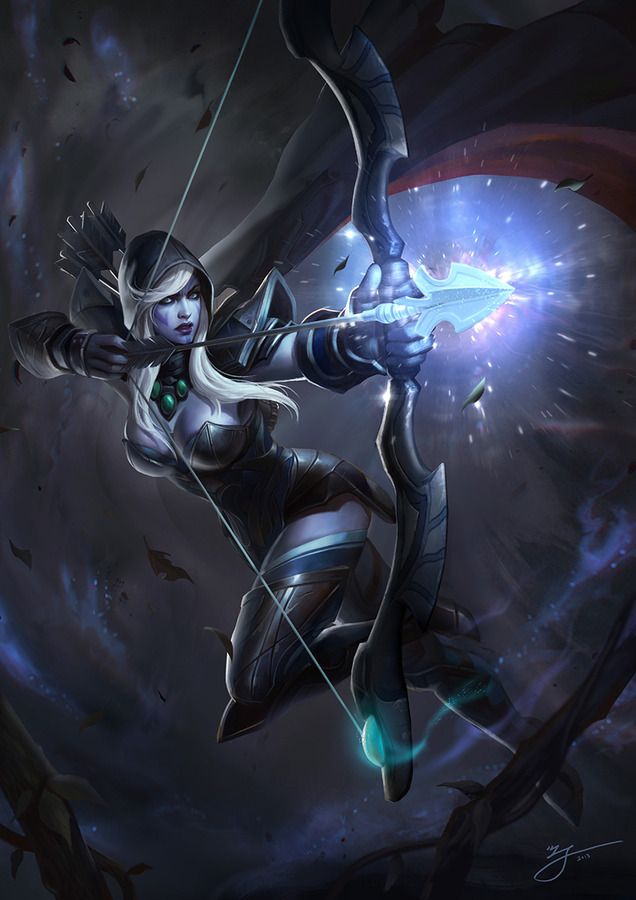 *Sometime later Matron Maim makes a proclomation that Dilarra Zau'afin is again worthy of the title Dreadguard. None may question or command her except for the Matron, not even the Yathrin.*
12 I will make your battlements of rubies,
your gates of sparkling jewels,
and all your walls of precious stones.
Top
Post Reply
2 posts • Page 1 of 1