What would get Users back onto the BGTSCC Forums?

For Issues You Are Having with the Forums 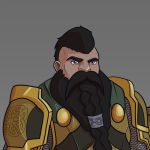 Re: What would get Users back onto the BGTSCC Forums?

The forum is a tool for a specific purpose.

In broad strokes it's here to provide an easy (relatively) organised space to access relevant setting and world building information. Rumors of X location threads and Guild RP threads, along with OOC information and announcements for the community.

Staff are the ones who largely have need to use the forums while players are free to engage / not engage with them as much or as little as they like. With the most productive use by players being

What a lot of people call toxic behavior on the forums can be summed up by people being over invested in either their idea of balance or a character concept leading to an unhealthy and combative approach to conversation that plays into a large majority of these offenders' main issue, which I would claim is a need to control or influence not only their environment but how other people interact with the environment as well. Something I can't throw the first stone on having been a right salty so and so in my day as well.

a) What is the main purpose of the forum

e) Taking a step back to assess if the changes have helped as well as allowing time for people to adjust to changes.

Now personally I don't have an issue with the forums playerside, staff side i think a ticket system would work wonders to help abate the flood of messages that come in to DM inboxes and inevitably leads to loss of messages in the flood of communication. I'm no longer am on staff to know if such is still an issue or if it's long been fixed under the new administration but it's something I would have liked to see in my day.

TL;DR
The forums and discord serve separate purposes, toxic behavior comes from over investment, any real change should be planned out carefully behind the scenes to fit to a cohesive design philosophy and better suit the purpose within that philosophy.
Boendal Silvereye.
"EATSIES!!!" - The Troll-sage 2018

Re: What would get Users back onto the BGTSCC Forums?

Grendunor wrote: ↑Tue Mar 16, 2021 5:40 pmStaff are the ones who largely have need to use the forums while players are free to engage / not engage with them as much or as little as they like. With the most productive use by players being

1) Character journals -- If your in game role-play requires some journal keeping; a text document on your computer will do just fine. Not to mention that since most people probably play NWN2 in the windowed mode, the text file can be up and visible along side with the game itself. Thus a forum for these character journals is not actually needed, and a text document is actually a lot faster to search through than a character journal split between multiple forum pages -- if given enough time to add multiple entries.

Thus, it is not the ease of use that would see write their character journals on the forums, instead, the primary reason would be that it is a way to garner attention of others. Perhaps someone just wants to give their own character a spot in the limelight, or simply have others read what was written. But at the same time, it is not necessarily the end of the potential consequences or effects of said attention. A public character journal is a way to build and acquire both in-character and out-of-character reputation and influence, which in turn might make it easier to rub shoulders with powers that be and receive the boons that come. After all, if a particular Dungeon Master quite enjoys a character journal one puts out, our Dungeon Master cannot help but feel more amicable towards plot and event related suggestions from our journal author. It will also make it far easier for that one Dungeon Master to reward our journal keeper with a special sword, or a cape, or a pair of boots -- after all -- just look at the effort that was put into 'role-playing.' It is a sad fact of NWN persistent worlds that if someone role-plays in the middle of a forest, and if there is no dungeon master to make note of it, the chances are that no one will ever hear of it. If we keep that in mind; it is easy to see why people would encourage others to write character journals, after all, there are other player characters that are deserving of that special sword, etc. But sadly, a public character journal is not always a sensible thing to do. For example, imagine that a character of evil alignment and organization is infiltrating another organization. The player behind our spy could see great effort to describe the whole process, perhaps even portray how the character feels about the infiltrated organization and its members -- and then someone with a character in the infiltrated organization reads through it all. People can be mature, people can say it is just role-play, and that is that. But unfortunately, even if that were the case, the actualy behaviour of the infiltrated organization is likely to change in favour of rooting out the spy. In the worst case, flimsiest of excuses will be used to create the thinnest veneer and facade of having 'discovered' this spy in character. A public character journal is a great thing for characters that sit around a 'role-play' hub without anything more meaningful going on -- because the player can just open up the chat log text file, copy and paste its contents, and rephrase it all into a journal post. I think the client extension has some option to rename these text files so that the file doesn't get overwritten with the next run of the game. What I would like to ask is if editing those text files is truly more exciting than actually interacting with the other players characters?

2) I suppose real life blessings of Talona may have allowed some to spend more time indoors during the year or so, but time nevertheless remains ever so limited. Not to mention that big public Dungeon Master events are slow and cumbersome for all involved, where most player characters cannot help but fall into the role of a silent NPC that occasionally beats up whatever the Dungeon Master spawns in front of them -- and it is simply because otherwise the Dungeon Master will have no idea what is going on. I suppose one could spend time reading about these events on the forums as a way of fleshing out the setting itself, but at the same time, is not more exciting to actually ask about these latest news in game and by doing so have a reason to interact with other people?

3) It is more less the same as the above.


Planehopper wrote: ↑Tue Mar 16, 2021 1:55 pmThe forums are what we make them. Seems that, aside from a few obvious incidents, things have been fine lately. You'd think if things were toxic we'd see that, and be getting reports.

Another way to look at it is that the server has finally achieved its long utopian march towards the perfect community of amorphous, indistinguishably grey, and utterly interchangeable blobs of humanoid shapes that have nothing original or interesting to say. The toxicity has consumed all, and it is all.
Top
Post Reply
47 posts