So the thing about Iron Golems: They have crap constitution. Which makes sense. It's a construct.

Thing is, constructs are also supposed to get bonus hit points based on their size category. It's in the Monster Manual under the entry for constructs.

So here's my thought: Give the Iron Golem Shapechange form the Epic Toughness feat. And just give a static +30 hit points, to factor for the Golem's size.

Thoughts?
Chaos is relative. What is normal for the Spider is Chaos for the Fly.
Top

Iron Golems are immune to a lot of things.
Top

Is HP based on the caster's die or does it follow the Iron Golem's d8 HP?
Top

It goes based off the Caster's Hit Die, but the Golem has a 10 constitution. Which makes sense. Golems don't get extra hit points for a constitution score...because they don't have one. They're objects. They aren't alive.

But NWN2 doesn't allow for the absence of an ability score, even with Undead/Constructs. In PnP Undead use their Charisma modifier instead of their Constitution modifier to determine their hit point total.

Constructs, on the other hand, have d8 hit die. But the way it works is that after all hit points are calculated after their Hit Die the Golem simply receives a static HP bonus for it's size. The exact total is listed in the Monster Manual, I don't remember off-hand exactly how much it is.

But since it makes since that Golems would have a 10 con in the game...to represent the average "Absence" of a Con score without factoring in penalties to HP because of their negative Con....I think they should have at LEAST the Toughness and/or Epic Toughness feats in order to factor for the extra hit points that they would receive merely as a result of their composition. Because you have to remember: You are transforming into a gigantic slab of IRON. It should have a LOT more hit points.

The reason for this is that the static HP bonus represents the factoring of the "Hardness" of the raw materials that are used to build the Golem. Since objects themselves, like a slab of iron, have an actual HP...they just have an insane Hardness score, which is like damage reduction for items.

Metal items, for example, just automatically take half damage from Fire or Cold. Wood items take full damage from fire, half damage from cold and electric. Sonic, of course, completely ignores the Hardness of all items, which is why Sonic spells are so powerful and usually have a significant reduction in their over-all damage output...because they can just blow apart doors/bridges/etc by ignoring the hardness of the objects.
Chaos is relative. What is normal for the Spider is Chaos for the Fly.
Top

It -seems- a bit weak to me compared to what you can get from other shapes, but I don't have enough experience with the spell to have a definite opinion on it. Do you get complete magic immunity or do spells with no SR check bypass it?
Top

It gives you spell resistance, but not imagine immunity I don't think.
Chaos is relative. What is normal for the Spider is Chaos for the Fly.
Top

It gives a whole bunch of stuff actually, including Magic Immunity.

Although the Magic Immunity it is granted is a special one, where any spell allowing for Spell Resistance to negate the effect, will not work. Only way to implement such on the server, while making sure that Spell Penetration doesn't overrule the immunity, would be to give the Iron Golem 99 Spell Resistance.

From the 3.5 Monster Manual: 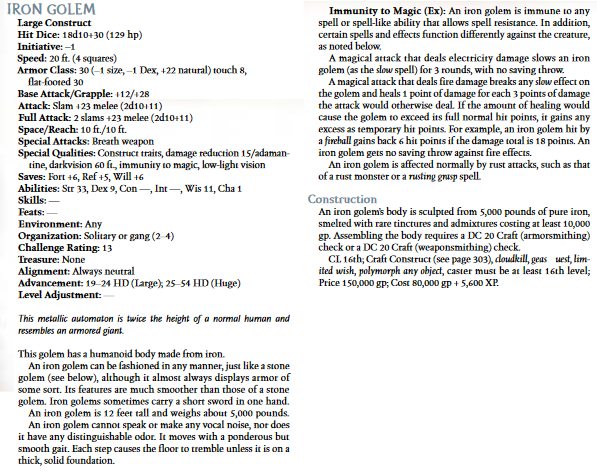 The Polymorph Wiki mentions it has magic immunity

Look for the tab at the bottom of the page:
https://wiki.bgtscc.net/index.php?title=Polymorphing

I just never tested it myself. Someone needs to get hit by an acid ball and verify! For science!
Top

Iron Golem gets SR 40. Real magic immunity was requested once some years ago, and it was shot down. As well, the Dev that updated the Polymorph system no longer comes onto the Server, and few others seem to want to touch it.
Storybuilding

The Vanilla iron golem had [Immunity to Spells by level (0-9)], which meant it automatically was immune to any spell that checked SR, but not to spells that ignore SR (like conjurations).

I don't know if that was what "Magic Immunity" referes to on the wiki, or the SR 40 that Steve mentioned.

IIRC, the result should be visible on your character sheet when active in either case.
Top
Post Reply
10 posts • Page 1 of 1