The caverns of the Upperdark mostly experience frequent but mild earthquakes, with a few strong ones that collapse routes or fill the caverns with rubble.

In a peculiar event throughout the caves, some plants go through all their life stages in a matter of hours. From a sprout and seedling to a fully formed tree that soon withers and dies, leaving behind seeds to restart the process.

The old Rockrun, now being rebuilt by the Company of the Blue Lantern and its allies, sees itself mostly intact. Though in a harmless occurrence, many of the rocks around the settlement turned strange colours, from green to blue and yellow, and even pure white or black. One even had a stripped pattern. And another tasted like very well seasoned meat. The genasi that found that out was laughed at. Many others tried the rock soon after.

After spending many days in seclusion, the deep gnome known as Meredith can once again be seen wandering the Blue Lantern company fort. As she observes the commotion about the colorful rocks, she finds it best not to eat it for now and decide to spend most of her time around the mines and offering rubies to Caladuran's shrine.
Eroan Sandram - Citzen of Doron Amar:
Character Sheet 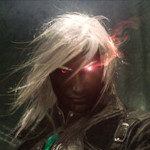 While mostly keeping to himself, the male drow warrior had become an habitual sight in Rockrun. Though soon after Ilhara vanished from her den, he was seen making a short visit, before departing Rockrun all together. He took a boat towards Mist Lake and was last seen heading towards the Myconid Circles.
Characters:
‣ Vesz'yraen
Top

Sitting in an abandoned building in Rockrun, Mitheera performs the sending ritual. Which the intended target would hear as a gentle whisper..and a pang of irrational worry.

"Ilhara where are you?"
Celestia - Blow it all up!
Top

A drow courier from Undrek Naudal, bearing the insignia of House Selmiyeritar, would attempt to deliver a letter directly to General Morex of the Blue Lantern, or as close to his inner circle as they were allowed to (though likely with some dissatisfaction if forced to interact too actively with one of the Eilistraeens). If forced to surrender the letter to a lesser-ranking member of Rockrun's government, however, they would offer little complaint - they have clearly been instructed not to stir up trouble if it can be helped.

The sealed envelope would not offer much indication of its contents to outside observers, but one thing can be inferred here: It appears Selmiyeritar is making diplomatic overtures to their unusual neighbours.
European player, UTC+1 (+2 during DST). Fixer of random bits. Active in Discord.
Notable characters:
Top
Post Reply
65 posts