GENERAL SERVER RULES updated 1/18/2017 on staying in character while in the game world under "Roleplay". New section quoted in bold below:


– Roleplay
– This is a Role-play Server set in the Forgotten Realms campaign world. Please respect the setting and stay in-character (IC). You can go out-of-character (OOC) if there is need for clarifications, or if you wouldn't be disturbing role-play around you by doing so (please mark your OOC speech by placing either (( , // or ooc: before or behind it). Do not talk OOC in Party Chat mode, unless a DM has approved such. Party Chat is a tool reserved for DM Events, not to be used to communicate "secretly" between groups, where in-character your PC would otherwise have to talk out loud, or could not communicate over distances.

Unless there is a mechanical OOC distraction such as a server crash, a bug, mistakenly spawning into the wrong location in game, being otherwise AFK, or another OOC rules exception, your character is to always be considered IC while in the game world outside of the Nexus unless a DM says otherwise.

Lore Base of the Server

Rules were revised, removed, and/or cleaned up. A new rule has been added regarding Nexus etiquette.
https://www.youtube.com/watch?v=byAfC5yW_hw
Top

General overhaul of the rules. Give them a read!
Forum Rules | Server Rules | PvP Rules

Text in pink is my personal opinion and does not necessarily reflect the DM Team in general!
Top

Added this bit back under the PG-13 section, as it was mistakenly left out during the revision.


Pregnancies are strictly forbidden unless directly supervised by the DM team and approved in advance. Any pregnancies are a form of "retiring" a PC for the duration, and resulting children are NOT to be roleplayed or represented in game.

The minimum age for any PC is 18 years old or racial equivalent.

Added this rule despite thinking we'd never have to:


Real Money Trading
Real Money Trading of any kind using BGTSCC as a platform is expressly forbidden. This includes (but is not limited to) the transfer of accounts, characters, items, currency, or in-game services for real life money as opposed to game currency. This also includes offering to pay developers or DMs directly for items, events, or work on the module. Any players found to have participated in this activity will have any items or accounts removed as a result, and likely will have their character vault wiped clean. Character art commissions are an exception to this rule.

EDIT: Made a small edit to clarify that art commissions are still fine.
https://www.youtube.com/watch?v=byAfC5yW_hw
Top

Updated Godmodding rule to include these clauses:


Minor instances of NPC interactions may however be used, such as and for example: "The merchant said they would spread the rumor I was seeking a special item," or "the bartender takes my order and brings me my drink," or "The local guards gave me directions or information about the laws."

It is also safe to assume obedience of reasonable orders given to subordinate NPCs (for instance, NPC assets controlled by your guild), but not the success of those orders. If you would like to speak directly in these subordinate NPCs' voices, please seek permission from the DM team first and this will be reviewed on a per-case basis. An exception to this is roleplaying your summoned creatures, and this may be done at will with the expectation that the actions roleplayed are appropriate for that type of creature. 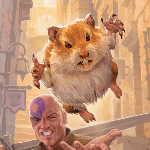 Added the following to the Unusual Characters section.


Unusual Characters
Every character must be a legal adult (18 years of age for humans or the racial equivalent for nonhumans). No exceptions.

While most DM stances on certain events are covered under the DM Rulings topic, if you have a character concept that's out of the ordinary (e.g. atypical background/heritage, nobility, contact with lore NPCs, or a concept that can't be adequately described on your character sheet), send a request to the DM Team who will clarify and deal with any outstanding issues.


Note that PCs are allowed to have minor foreign nobility in their backrounds, contingent on at least one of the following variables:

PCs also may not have Balduran, or Amnian nobility built into their backgrounds.

Be honest and as thorough as possible, and respect the stipulations the DM Team set for your character, if any. Omissions or failing to comply to the stipulations can lead to your character's background either being rejected or retroactively revoked. In extreme cases you may be subject to disciplinary action.

Added the following to the Be Respectful section.


Be Respectful
Players may play a character, but they are not the character. Remember not to take in-character grievances to personal, out-of-character attacks, nor to use out-of-character motivations and agendas to fuel in-character behavior. Even when your characters are bitter enemies, remember to be respectful towards the players and that the goal of your interactions with them should be to have fun.

If you are uncomfortable with someone's RP, you have the right to respectfully back out of the RP. Always remain polite and courteous when doing this. If someone chooses to back away from your RP, respect their decision and let them go.

If you don't like someone, don't get involved with them. There are enough players in the server to go around that you should not be obligated to RP with someone who you don't like, and RPing under a hostile OOC environment only breeds poor IC and OOC behavior, drama, and frustration especially if staff gets involved.