The War for the Western Heartlands

The War for the Western Heartlands 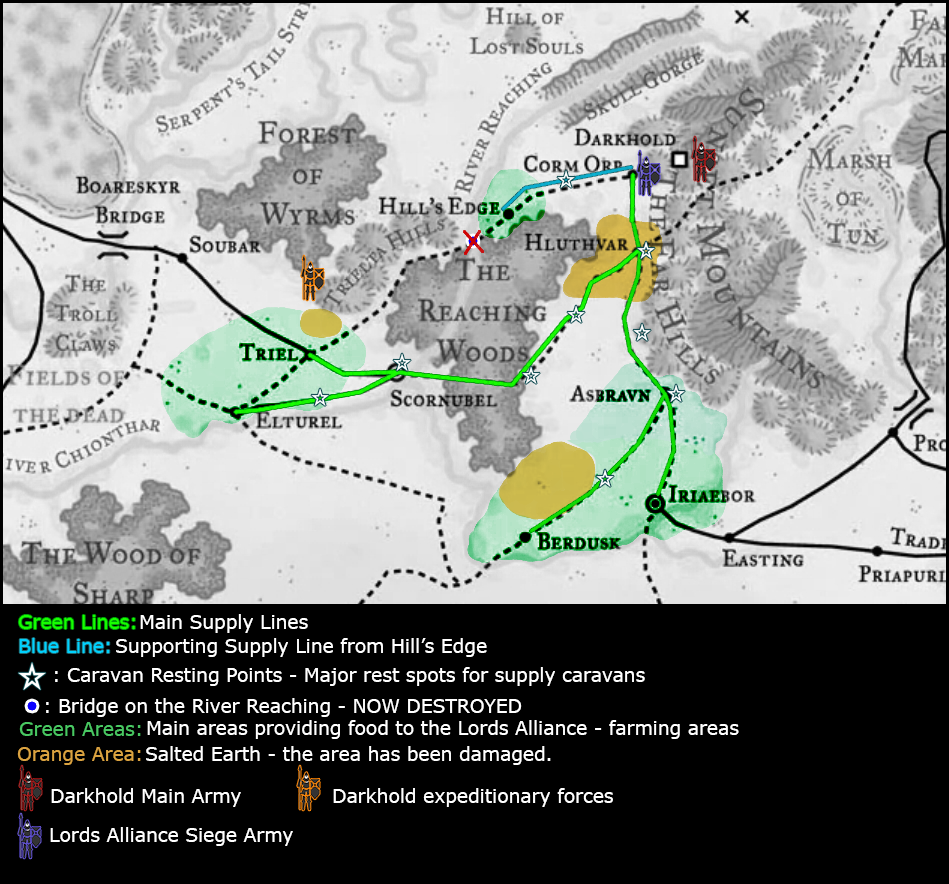 The war between the Lords Alliance and Darkhold starts to show its consequences further away from the walls of Darkhold Vale. While the joined forces of Elturel, Berdusk and Iriaebor lay siege against Darkhold, sparks of conflict start close to their homelands.

The Zhentarim attacks farmlands and supply lines avoiding conflict with the Lords Alliance's main armies, showing no mercy for the innocents involved. An expeditionary force of at least one thousand soldiers was spotted north from Triel, moving to the south east.

Some foul ritual was completed in the farming areas close to Berdusk and Iriaebor, destroying miles and miles of fertile land with an unnatural and violent weather.

The Black Dragon that destroyed the Alliance's woodcutting operation in the Reaching Woods attacked once again to destroy the bridge on the River Reaching, south west from Hill's Edge.

It seems that Drow raiding parties have been spotted attacking the farmlands around Triel and Elturel as well.

The cities of the Alliance mobilitate more soldiers to defend the farmlands and supply caravans, meanwhile up to the north, the sieging army shows no immediate interest in attacking the enemy's walls. It seems that Lord Dhelt wants to test Darkhold's resilience and food reserves before making his move.


As the news spread of the violent and merciless attacks on the farms and caravans of the Lords Alliance, many more join the war to defend the innocents.

It is said that reputable adventuring groups are being hired in all the cities and towns of the Western Heartlands to help the Lords Alliance defend their caravans and farming communities.

Many seem to join as volunteers, priests, paladins and do gooders from the region gather to offer their swords. Disgusted and saddened by the recent atrocities.

The Church of Chauntea makes itself particularly vocal about the loss of so many innocent farmers with their families, and the consequent destruction of their precious and bountiful lands. Meanwhile, the Church of Tempus declares its profound disgust for the recent display of so called dishonourable warfare and tactics aimed to target the weak and defenseless.

With the aid of many, the Alliance prepares to defend itself from any further attacks and raids. 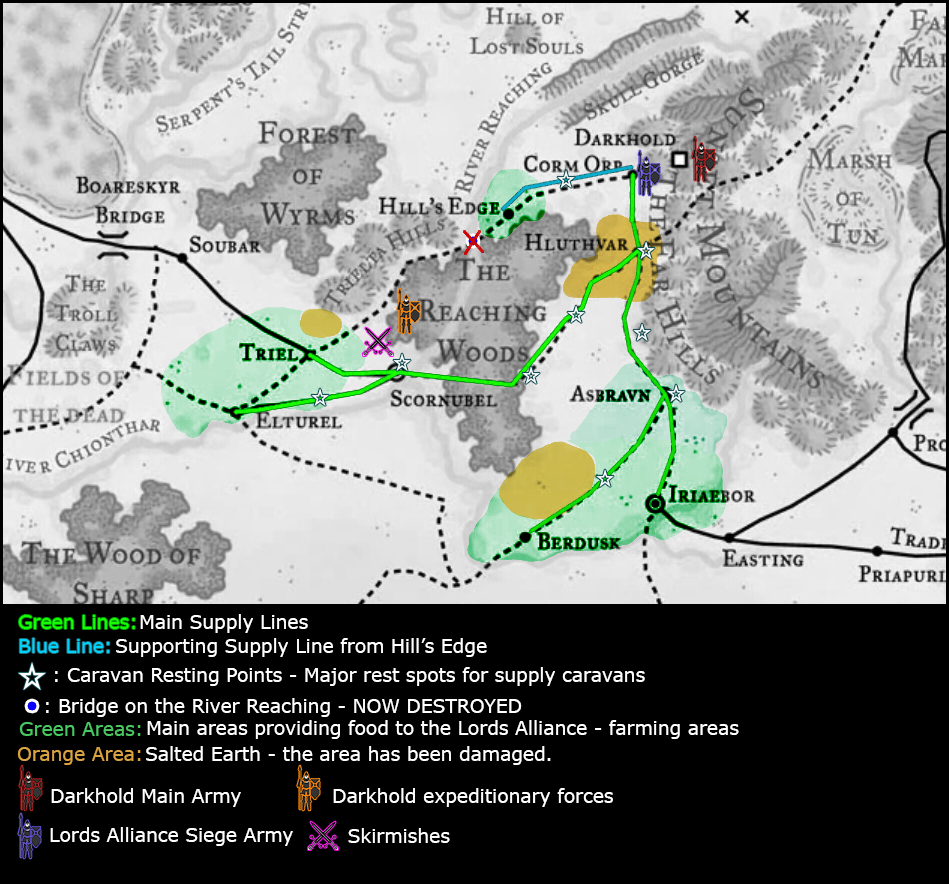 
The Zhentarim's Expeditionary forces marches into the Reaching Woods.

A couple of nights afterwards the farms between Scornubel and Triel are raided by soldiers and beasts. Rumours talk of drow fighting alongside the Zhentilar as well as werewolves.

The area becomes the theatre of relatively frequent skirmishes between the Lords Alliance and the Zhentilars.

While the countryside is obviously being affected by these attacks, this time the Lords Alliance seems to answer these raids more readily and effectively. Even so, it seems that the Zhentarim's main strategy is to avoid losses and they swiftly disengage from any battle that might cost them too many troops.


The war goes on, although slower.

There have been frequent skirmishes along the supply lines of the Lords Alliance and their farmlands. The Zhentarim's raids have not stopped but slowly became less effective as the Lords Alliance adapts sending more experienced soldiers where it matters.

Meanwhile, before the walls of Darkhold Vale, the Lords Alliance is keeping the enemy on the edge with its siege weapons. The trebuchets managed to break a hole on the walls but there has been no assault as of yet.

With the coming of the Gods' Silence, magic being unpredictable and the Gods not answering to their faithfuls, the idea of assaulting the enemy became more uncertain. On top of that, the general chaos and disrupting events happening all around the land are making it difficult for either side to plan their actions effectively.

It is clear that the current situation is affecting the conflict, leading a war effort during such troubled times is something that no one could have expected.

Across all cities and towns of the Sword Coast and Western Hearthlands, town criers announce the war between the Lords' Alliance and the Zhentarim has ended. Copies of the peace treaty is hung up on noticeboards for all to see. These copies are not signed, but the names of those signing the original document are listed: Leaders of Elturel, Scornubel, Berdusk, Iriaebor, Corm Orp, Hill's Edge and Darkhold.

The peoples of the towns and cities of the Sword Coast and Western Hearthlands now anxiously await a formal addressal of this peace treaty by their own leaders.

Herein are stated the terms of peace settlement between the Zhentarim of Darkhold and the Lord's Alliance cities of Elturel, Scornubel, Berdusk and Iriaebor.

Article 1.
Between Darkhold and lands of the Lords' Alliance, a neutral zone shall be established, herein referred to as the North Sunset Vale Border Zone. The borders of this zone shall be the River Reaching to the north and west of Hill's Edge, the walls of Darkhold Vale to the east, and to the south at the northern end of Hluthvar's lands, and it will include the townships of Hill's Edge and Corm Orp. The North Sunset Vale Border Zone shall be independent and autonomous, with its own leaders. Any trespass on these lands by Zhentarim or Lords' Alliance military might shall be seen as hostile action.

Article 2.
The Zhentarim withdraws all claims on the crossing over the Winding Water known as Boareskyr Bridge and its surrounding environs, including the bridgefort.

Article 4.
No form of violent conflict between the Zhentarim and the Lords' Alliance may be initiated for a period of one year.

Article 4a.
There will be an indefinite cessation of armed hostilities between the Zhentarim and the Hellriders of Elturel.

Article 5.
The Zhentarim will be free seek the establishment of trade agreements with individual cities of the Lords' Alliance.
"Without contraries is no progression. Attraction and repulsion, reason and energy, love and hate, are necessary to human existence."
- William Blake
Top
Post Reply
5 posts • Page 1 of 1