This is more a "RP feedback thread". I read the first post and it's not been all that accurate in how this thread has been used over the years I've been around.

wurdpass wrote: ↑Mon Mar 11, 2019 3:29 pmWhich I would like about my attention seeking Drow warlock Miirszyx, please

I haven't interacted a lot with Miir but I think you've gathered from an exchange we've had that I quite enjoy the crazy character. He's extra crazy with Aunrae around. Can't say much more as we haven't interacted on a deeper level!
Power is the most persuasive rhetoric.
Friedrich von Schiller
Top

Thanks a lot for the feedback @Glowfire! I agree this is a feedback thread and it seems to me discussion of how much/whether or not RP is required on BGT should happen elsewhere.

With Miir I have a lot of fun running his mouth and dancing around, though I do sometimes get concerned I'm shutting people out of convo. He talks in an intentionally circuitous and confusing fashion - but I want to strike a balance so people know sorta what he's talking about.

I am a big Kazimir fan as well, was disappointed Miir didn't get to chat him up at the brawl although it didn't seem appropriate

I think you're doing a good job making him stoic without feeling lacking for characterization or personality. I will say that the fact that his motivation being so inscrutable can make it hard to find the right thing to talk to him about, but maybe that's just a natural lack of familiarity thing.
Jaluks get blasted every day, dear, you'll be alright. You're tough right?
Top

Hello,
I'm still new to the server, and I did do a lot of RP on a nwn server about 12 years ago or so but I haven't roleplayed since. I'm playing Oskod (my main character while I learn the ropes) but I appreciate any feedback anyone has on him when they encounter him. He's a northern bear warrior, below average intelligence, bad with social cues, struggles to understand magic, wears colourful gloves because he thinks they make him look "fancy", and generally solves problems by hitting them

I look forward to meeting your character, Trinket, and welcome to the server! We are in a bit of a lull of activity right now, but I am hopeful you'll meet a crew to roleplay with!

That said, if anyone has feedback on Jackard Marks, please shoot me a PM.
Jackard Marks - Waukeenar Merchant of Tethyr - "The bold find the gold, the careful keep it - and the timid yield it up."
Top 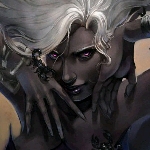 I'm going to be a little biased - that's unavoidable, unfortunately - but a PM was sent in! Hopefully most of the bias is gone! ^^
Aunrae - Ilharess d'Qu'ellar Selmiyeritar
Flora - First Mate of the Siren's Song
Azariah - House Vale's Master of the Arcane

Supermod mode, activated. The rest is just my opinion.
Top

I wouldn't mind some pointers/notes.
Top

I never received feedback, AFAIK, this is discontinued. I'd certainly appreciate feedback on Ceirinohr.

As for Cinn, the only one I've had dealings with - lean into her becoming an IC pariah, IMO. She's done some things, said some things, that would IC'ly lead to that. That doesn't make you, OOC, a pariah.

For instance, you accused one of Ceir's friends of being a necromancer, and he knows that's not true (OOC: it's probably true). This lead to said friend lashing out at Ceir for being a Talassian, which was great RP conflict. But it makes Ceir view Cinn as even more of a pariah. So lean into that. There can be some really fun RP in that vein. Ceir not wanting anything to do with Cinn doesn't mean I don't want Ceir to have anything to do with Cinn. Quite the opposite, there's a lot I could see happening.

(Just be aware that not all players are looking for that sort of conflict.)

Side note: It makes it really odd to "know" that you murdered Nalissa, but Nalissa is walking around. I'm not sure what Ceir thinks of that (and again, no idea how much/what is true - seems nobody wants to continue that thread, so best to drop it). Not all conflict is equal. An accusation can be played out our noped out of fairly easily. Even an assault won't stop continuity. But death, and maybe disfigurement, can be really halting to both immersion and play.

That's all I could really say, as I haven't had much exposure to your RP. Haven't seen you around much.
Top

Just starting to find time and the will to play this server as much as I always wanted too... good to see the RP is still rich, and the mechanics and classes seem full and balanced enough where I won't feel overwhelmed not making a min/max uberbuild.

My real question, not wanting to go make a separate thread about it, is where would I begin to start trying to RP for something like a Pseudo or Faerie dragon Familiar? I think it would fit my character more properly than the choices that are currently there, but it doesn't seem like a good thing to spend an entire feat on when it offers 0 benefits outside of RP.

Is it possible to RP for? How would I even begin building the narrative and getting it approved? I guess I'm asking more generally, how do I begin the journey to RPing for IC changes to a character in general, and how common is it?
Top

salmarino wrote: ↑Fri Mar 19, 2021 12:18 pmMy real question, not wanting to go make a separate thread about it, is where would I begin to start trying to RP for something like a Pseudo or Faerie dragon Familiar? I think it would fit my character more properly than the choices that are currently there, but it doesn't seem like a good thing to spend an entire feat on when it offers 0 benefits outside of RP.

There is one benefit: If you are a specialist caster, you can choose prohibited spells for your familiar. Only spells of level 1-3 for normal characters, and 4-8 for people with the Improved Familiar feat.


Is it possible to RP for? How would I even begin building the narrative and getting it approved? I guess I'm asking more generally, how do I begin the journey to RPing for IC changes to a character in general, and how common is it?

You don't need it approved really. You are free to send a request to the DM team if you have an idea you want to run and would like DMs to assist you with it, but as the feat is freely available, you're perfectly within your rights to RP acquiring one yourself. And while technically getting new familiars doesn't *actually* require much effort beyond casting the find familiar ritual in order to get a new familiar (even an improved one), there's nothing wrong with making it a bit more involved than that.

Personally, I prefer RPing for IC changes, too. I similarly did an RP ritual to get my character's familiar. For my part, I wrote a journal entry on the forums to describe how the ritual went. For RPing IC changes it's mostly a matter of, not rushing into things (like even if you level up and grab the feat, you don't use the feat until you are ICly ready for it), and figuring out a good story to follow to get you where you want to go. For getting a faerie/pseudo dragon, you should probably research them on for example forgotten realms wiki or something to figure out how they work, and then figure out a plot or ritual you'd like to do to get one. Alternatively, like I said, you could send a request to the DM team to help you with finding one.

If you're asking if you could get one without taking the feat, then that's not really possible.
Tarina — Witch, Apothecary, Dealer in Spirits and Black Magic
Top

Not entirely sure how this works, but I'd love to get some feedback on my character, Corneille de Locke.

bharring wrote: ↑Wed Jan 20, 2021 10:26 am I never received feedback, AFAIK, this is discontinued. I'd certainly appreciate feedback on Ceirinohr.

I think in the end I would really love to just RP with him more, but obviously time restraints can't allow such things. From what i have observed, you keep the character open to multiple paths of fortune, which is great (it's very easy for a player to railroad their own character along a path that in game interactions do nothing to support or encourage). Also, what might be seen as ambivalence in-game I do understand, OOC, has narrative importance. Maybe that makes him appear to have less conviction, or maybe it makes him look like a character able to keep an open mind.

Debating if it would be rude to scroll back through this forum now and add in opinions on dated posts =_=
Iolanna: High Druidess of the Green Enclave, Arch of the Crescent Moon, Druid of Greenest, Faithful of Eldath

On that note though... I guess if there are thoughts about my rp with Iolanna or Avery, it's time to put on my big-girl pants and hear them if I want to be a better player. Have at it?
Iolanna: High Druidess of the Green Enclave, Arch of the Crescent Moon, Druid of Greenest, Faithful of Eldath