It Does What It Says on the Tin: Resolved Issues

Blinding strike feat is now available for all to pick. Wasn't it rogue only?
Top

Trying to prune some spells from a wizard's spellbook, and the following ones are being rather stubborn (Spellbook: you know no such spell!): I've tried both their original spellings and their original spellings with a space at the end as the string entry.
"...I know that kind of man / It's hard to hold the hand of anyone / Who is reaching for the sky just to surrender..." – Leonard Cohen, The Stranger Song
Top

Another stubborn spell I just stumbled across, also double-checked for the potential space at the end: Thanks for looking into it.

Just leveled up on my wizard/guild thief, and in the patch notes it mentioned GT should properly give Simple Weapon/Light Armor proficiency now. I figured this would be retroactively granted on level-up, but seems that's not the case. I've no more levels of guild thief planned in the build. Would I need to ask a DM to manually add the feats to the character?

EDIT: Massive thanks to DM Vile Things for the help! Proficiencies now squared away.
Last edited by Svabodnik on Fri Dec 04, 2020 4:24 am, edited 1 time in total.
"...I know that kind of man / It's hard to hold the hand of anyone / Who is reaching for the sky just to surrender..." – Leonard Cohen, The Stranger Song
Top

The Rogue's 'Hide in the Shadows' ability seems to calculate the Reflex DC for being surrounded by multiple enemies incorrectly. The DC should be twice the highest BAB of the surrounding enemies, but from my experience it has been considerably lower. Typically it's Reflex DC 2 for two enemies, DC 4 for three enemies, and the highest I've gotten it was DC 10 for six enemies, leading me to believe that the way it's being calculated is ((n - 1) x 2) rather than (highest BAB x 2), where n is the number of surrounding enemies. The DC for just a single enemy seems to calculate correctly (BAB x 1), however.
Hidden: show 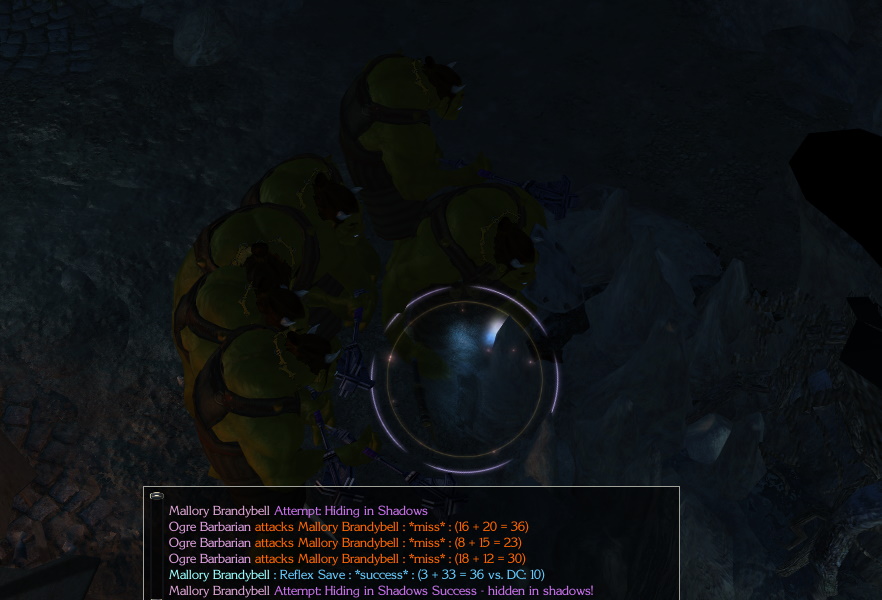 As a separate issue, Monk/MotLD progression may be giving more AC progression than intended. On a grey orc monk 25, with the last 9 levels in Monk of the Long Death (with all gear removed, following server reset and rest, to make sure I'm not subject to any unknown effects) I seem to be getting 32 AC, while on paper the character should only be seeing 30.
Hidden: show

EDIT: On reaching level 26 (and thus MotLD 10), the AC further increased by +2. Since this was the point at which Macabre Experiments was supposed to increase by +1, it seems as if double the intended AC bonus is applied.
"...I know that kind of man / It's hard to hold the hand of anyone / Who is reaching for the sky just to surrender..." – Leonard Cohen, The Stranger Song
Top

Cascading Plague cannot be Empowered by the metamagic feat.
Top

Summon Monster IX's DC for dispells is set at CL+1 instead of CL+10 making it much too easy to dispell.
Top

It wasn't really meant to be when it was created. But maybe it should be updated.
Top

The spellbook counter on log-in may incorrectly display that the spellbook limit is 250 for when trimming occurs, rather than >246 which happens on Studying a spell.
Hidden: show 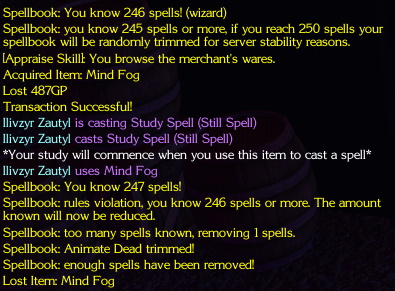 EDIT: Swapping to another (much older) character, conversely, and seems as if the trimming for learning new spells over the limit doesn't occur below 250 (potentially due to learning spells over the 246 limit through level-ups, rather than Study Spell).

This part of topic is very outdated, thus, i move it to archive.
Top
Post Reply
1197 posts