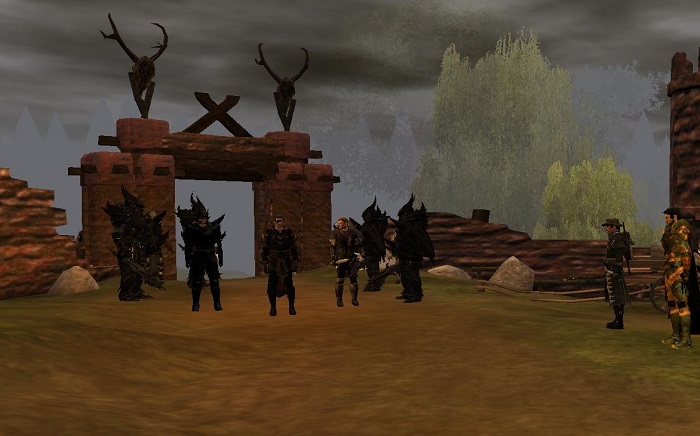 A troop of Zhentilar soldiers of the Loyal Hammer company arrive in Soubar, led by Imperceptor Vyshasa and his personal guard. The one-eyed priest of Bane presented himself and his men to Mag of Soubar, promising to comply with the obligations of the Zhentarim-Soubar accord signed to counter the devils.

A number of local faces were present to witness the meeting, including Captain Nightgale of the Ebon Blade, the Shaundakul healer Kazimir, and Michael Dunn. Others had travelled from further afield, including the Baldurian based monk Mi-Le and the Red Wizard Azymandeus Faustus. 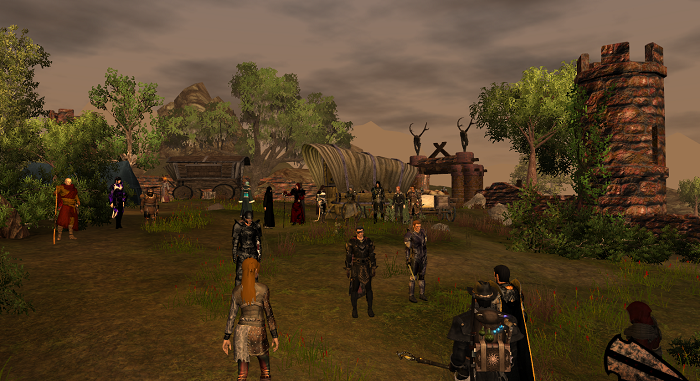 The Imperceptor was accompanied by his bodyguard Lothar Steelsworn and agent of Darkhold Bob Thairo when Mag and the Ebon Blade took him to see the site where the Zhentarim troops would be camping. There, the completion of the fortifications on the south wall were discussed, before Vyshasa and Lothar went into a private meeting with Mag. 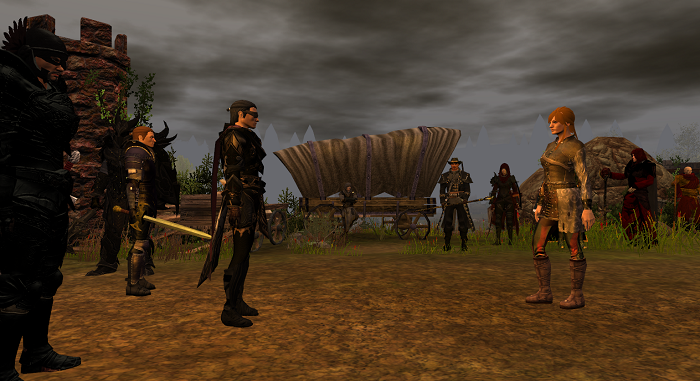 Imperceptor Vyshasa later got a tour of the northern fortifications with Captain Nightgale, before entering the Ebon Blade compound for a meeting.

More often these days, Mag could have been seen walking around her settlement and taking time to speak with the locals, the merchants, and a few individuals belonging to the monster races, namely the ogres and the were-rats. The leader of Soubar visited the construction site stretched over the town's walls where she spent quite a while inspecting the progress and discussing details with the architect and one of the stonemasons. Before returning to the Tavern, she took a moment to observe the Militia during one of their training drills.

Guidelines for my events
Remember: It's just a game. No need to get sad, angry or vengeful over it.

In the last two tendays, almost a dozen visitors came to speak to Mag, including the local traders Shifty, Harmony, and Mudd, the tiefling leader of Frilled Lizards Mercenaries, the local healer and Director of the Golden Wheel Kazimir Resnik, the Church of Bane's Dreadmaster known as Barristan Schulltze, Bane's priestess Brigitte Degenhardt, mage Kordren Ivatrix and the infamous necromancer Morgan Blackrose.

Meanwhile, the Zhentilar detachment of the Loyal Hammer company are settling in to their new camp in Soubar. Soubar lies on the southern end of a Zhentarim zone of defence culminating in a large camp at the confluence of the Winding Water and the Serpent's Tail Stream, from which patrols issue forth between there and the Trollclaws. Imperceptor Vyshasa, known as the Eye of Fzoul, is most commonly found among the troops in the northern camp, but he is now a regular visitor to Soubar too, always accompanied by his personal guards. Those watching such things would notice he is careful to keep the majority of his business with the Zhentarim troops alone.

Since the first attack on Boareskyr Bridge, a small number of Soubarians packed up their camps and left. Some say it was just the first wave and more will follow when the situation becomes dire, others speculate that things might be different this time around.As if the devils were not enough, the rumored sabotage of the Soubar's Wall turned out to be true. Time will tell who was right when the reality bites hard into Soubar's core.

Rumours spread of some sort of summit held in the kitchen in the Winding Way. The meeting was hosted by Mag, with a attendees from the Spellsworn, Ebon Blade and the Church of Bane. Senior Zhentarim joined later, including the Lady Castellan of Darkhold and Imperceptor Vyshasa, the Zhentarim's western commander.

The meeting went on for some time.

A warband of orcs, led by a couple of devils and human warlocks, has supposedly raided the Boareskyr Bridge with efforts to set up some barricades. Through valiant work of some adventurers being nearby, the swathes of orcs were defeated. Some rumours speak that the entire wave of orcs was held off on the bridge for the longest time by one dwarf and one human- a feat that impresses some of the locals of the northern reaches of the Sword Coast enough to just stay out of their way.
~All Their Days are Numbered~
Server Rules
Better read this, so I don't harvest your soul... too soon
Dungeon Master Rulings
To avoid confusement and becoming a soulless husk
~Campaign Coordinator for 1353DR, 1354DR and 1355DR Metaplot~
Top

A group of adventurers were seen headed into the thunderride hills Heavily armored and warded to the teeth, a few hours later fire was seen rising into the sky from deep within the lands surrounding. Rumors begin to spread of a battle between two bugbear tribes, but by the time anyone can reach the area all that remains is smoldering dwellings, scorched earth, and a sea of dead bugbears. From the aftermath one can see that there were two opposing bugbear factions, ones wearing crude red leather armors, and the others black, some are scorched and burnt, and others savagely ripped to pieces, but one thing is clear, the red side won the battle. One whom looks upon the grizzly scene would come to know better the sheer ruthlessness and violent nature of these creatures with but a glance around the area. Savagery, brutish, and hatred, these are a few words that come to mind. Though the area is now silent, there is a uncomfortable looming feel in the air that is unpleasant to even veteran warriors.

It is clear that this event has lessened the attacks on travelers and caravans on the thunderride roads, some commoners report they even seen bugbears in crude red leather armors watching them from the hills around as they traveled the roads, a chilling feeling of being stalked.... oddly enough they report no attacks were made by the creatures, and as the days pass it continues as if a odd unspoken truce has been formed with some of the creatures..... but not all, attacks seem to still happen, but far less frequent than before the fires from afar were first spotted.

People chatter and talk in the area's around, and one thing seems to be common in all words surrounding.... its only time before whatever there up to ceases and attacks pick back up.
Top

It is rumored that in recent days the Loyal Hammer company of Zhentilar based in Soubar during the infernals conflict left Soubar and may have been seen marching back in order towards Darkhold on a re-deployment. It is also said that in recent days Zhentarim patrols and escort of trade caravans and caravan routes to and from Darkhold from Baldur's Gate have seen increases in troop levels and security measures, rumored to perhaps ward off hostile Hellriders of Elturel based in Triel.
Lore Base of the Server

Rumors have it that a large group of peoples were seen headed out of the farmlands around midday, the group was said have many nature walkers traveling with them. within hours of there departure trees could be seen growing from miles away, seeming to just sprout up and sore into the sky, those whom went to inspect the sudden growth return stating that the area is now teeming with life from the smallest plant to the largest tree. Animals aplenty now roam the area and a place that was destroyed in the devil wars has now returned, more vibrate then ever.

Shortly after the outburst of life, many peoples that have lost there homes in the war begin to pack up and head north, much of them stating this was a blessing from the gods, and that they will now seek to create a new life from what was just graciously given, most of them seem to be packing up hunting supplies, and materials enough to build small farmsteads.

Along with the departure of peoples north, the temples of nature have seen much praise because of it, and the shrines of many including the oak father, chauntea, and eldath overflow with gifts from the populace.
Top
Post Reply
113 posts