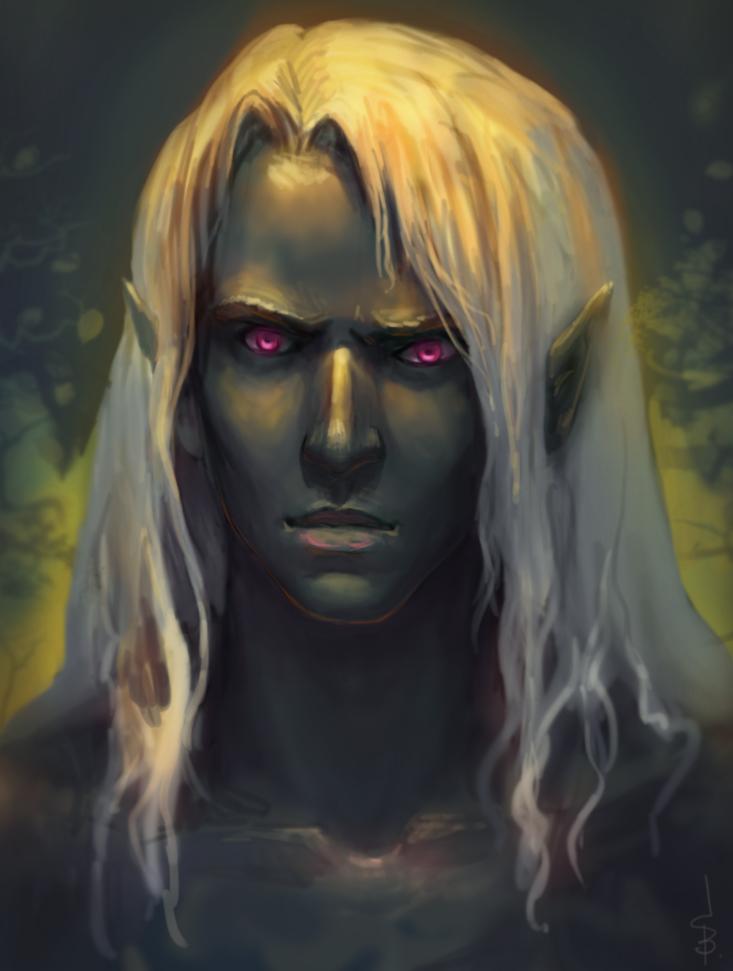 First Name: Vuzaer
Last Name: Teken'duis (He no longer uses the name as that Quellar fell in 1319 DR)

Personality Profile:
General Health: Good
Deity: Eililstraee , though he knows nothing of her religion, most of what was taught to him he knows are lies taught at Tier Breche.
Initial Alignment: Chaotic Good
Profession: Hunter
Base Class & Proposed Development: Ranger/Assassin
Habits/Hobbies: Hunting and stalking beasts and others in the caves.
Languages: common, undercommon, drow sign, elven, animal, sylvan, terran, assassin.
Weapon of Choice: Scimitars

Background: He was born in Quellar Teken'duis, the 16th Quellar of Menzoberranzan, in 1240 DR, as a youngster, he was always very mischievous, he loved bothering people and playing jokes on others and then hiding and running away, he was very good at doing this, though this earned him many severe punishments on his earlier years. When he turned 26 years old, he started his training in Sorcere, he spent a good part of his life there, as he wanted to become a wizard, though this would never come to happen.

He liked to read many books, but ranging on many things, though he was most interested in tomes that dealt with the nature of life and ecosystems. He enjoyed walking around the caves and used scrolls and potions to stalk and watch the fauna of the Underdark for hours, sometimes, though he never took a kill, he believed that life should be protected and had a merit of it's own.

He had made friends with an earth genasi wizard who was a trader, Parhlebum, an old and gentle genasi who made business with the drow in order the survive, he liked Vuzaer because he asked him a lot of questions and he he knew that he was not like the other drow, in the way he spoke and conducted himself, as Parhlebum sold many supplies to House Teken'duis, Vuzaer learned fast how to speak terran and became his closest friend.

As he enjoyed reading, he also enjoyed writing a diary, this was used against him, as his older sister, a yathrin (priestess of Lolth) stole his diary and made it a scrying sensor, while also taking time to reading it, as she had found the secret place where he was hiding it. In a bookcase, with a cover that said "Life of the Underdark", he mainly kept notes in there about displacer beasts, which were one of his favorite creatures to observe, but he also had some personal things in there, he enjoyed writing about other people, he was someone who fell in love easily, and wrote in many details about the females he fell in love with, many times avoiding writing their defects and other obvious things, he also wrote how he hated Lolth and how he wished that he could somehow avoid having to do anything with her, he hated her with such a passion that he cursed her and attacked many of the drow customs and the lolthite priesthood, in particular, her sister Zilvarra, whom he pitied and thought that she could be better., this is something that his sister, Zilvarra Teken'duis, noticed as she read his diary. Once she had enough, she showed the diary to the matron of House Teken'duis..

One day in 1319, Zilvarra was waiting for him to reach his personal quarters she was already inside them, waiting for him, the meeting went as follows:
"Vuzaer, you are a disgrace, you want to become a faern?" she hissed. "You will have none of this, you are obviously very misguided, you shall become a drider or maybe I kill you, I don't know, I have seen enough of your stupidity on your diary and you will not embarras our Quellar any longer, The Ilharess has read your diary and I will make an example out of you in front of the other jaluk of the Quellar, so that they see what happens to heretics."

He called for a meeting of many of the males of the House Teken'duis, where he was stripped of his clothing and cut with a ritual spider knife of Lolth, which not only was magical but also poisoned. His sister cut him all over his body, he never screamed and kept alive for as long as he could, which angered her sister.

Suddenly, an explosion was heard, the mistakes that House Teken'duis made, came to bite them, demons, wizards and many other calamities attacked the House Compound, House Teken'duis resided in a two-stalagmite compound in the northwest part of the city in West Wall and it was being attacked by order of the Ruling Council, House Baenre, for their failure against House Freth.
The attack caught them and in the confusion, Vuzaer was forgotten and left for dead...he was very wounded but still alive, but the poison was doing it's job, he fell down, though someone saw this.

Parhlebum was there, he saw what was happening to his friend though he knew he could not intervene, until the Council attacked, at this time he rushed to him and saved him. He was a very powerful and very old wizard but he was also very strong, he managed to escape and take him outside of Quellar Teken'duis by magical means. He took him to Mantol-Derith, where he lived very briefly caring for his old friend as he was very weak and saving him took a great toll on him , only one year, as Parhlebum passed away and Vuzaer was alone again. The most important he left him were his chain pantaloons, a pair of enchanted chainmail pantaloons, in Parhlebum own words, these were commisioned to a very important fashion connoisseur from Baldur's Gate, sadly these never reached him since they somehow ended up in the Underdark. These chainmail pantaloons are enchanted with powerful magics and makes anyone wear them, have stronger and thicker legss, which give one a considerable boost in overall strength.

He decided to brave the tunnels of the Underdark, he travelled many miles, many times offering his services as caravan guard and having long abandoned his wizard training and started wielding two scimitars that were passed down by his old friend, these were magically enchanted and very powerful, he decided that he would show his scars proudly, as he was very thankful for having survived what was certain death, but also he had a very dark view on life and was pessimistic and stoic, though he was also very prone to outbursts of happiness when things were going his way and also learned of Eilistraee, but he never met any other faithful of the moonmaiden, though, he had very little hope, he still had it, though he did not show this very often, as what he enjoyed the most was hunting, he had become more somber and stoic and no longer believed that all life should be protected, but he never became a heartless killer, either way. He killed many drow and duergar during his travels and he learned how to fight them better than other enemies, many times working for caravans of different races and never working with Lolth, either directly or indirectly.

During his travels he heard of S'shamath and in 1355 1 Mirtul he travelled there, he thought that maybe in this city he could find other followers of the Moonmaiden.

What fate does the Underdark have for him? Only time will tell.


Goals: Be at the top of the food chain.
Possible Plot-Hook Ideas and Misc Facts: Very impulsive and crazy , but good hearted.

Hidden: show
Now a fallen ranger, Vuzaer has sucumbed to dark thoughts and madness, he balances himself on a knife's edge, giving place in his heart for revenge and jealousy, he now seeks redemption, in a place where he can get lost forever to the pits of the abyss.

( this is still a work in progress)