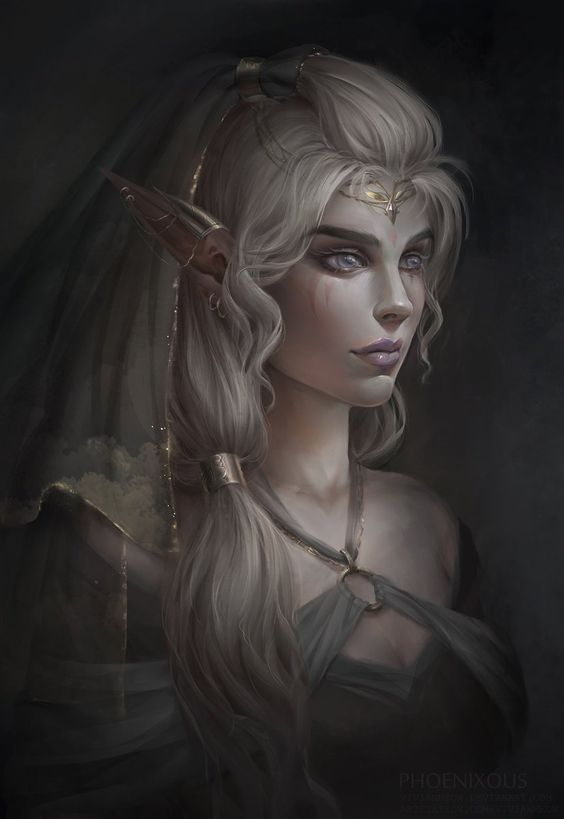 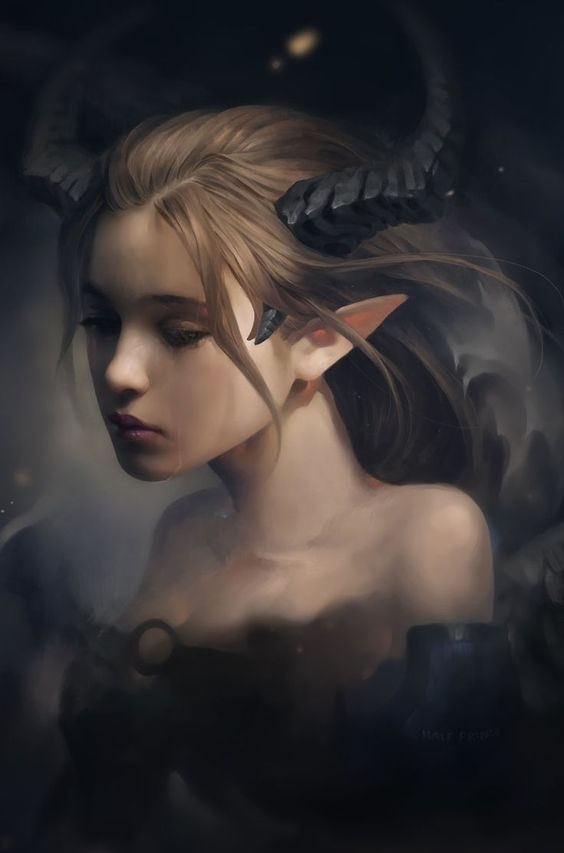 Background: Nemeia is the smug yet ashamed daughter of a long suffering bard who sought to become a Disciple of Music and a false prophetess who poured honeyed falsities into his ears while reveling in his botched efforts. She essentially became an apprentice of her mother's duplicitous nature, intently studying the art of counterbalancing encouragement with catastrophizing visions. As a child, she would accompany her parents during their various exploits under the guise of a mystical prodigy. When her mother noticed that Nemeia had a knack for swindling commoners and coaxing out their most cherished dreams, she inducted her into the worship of Beshaba, the goddess of trickery.

As a younger woman, Nemeia capitalized upon her imposing obsidian horns by claiming to "scry the darkness", an entirely fictitious practice involving the attunement with sinister spirits and demons that haunted her customers. For a fee, she ensured that she could lift curses and diminish ill-intentioned entities. While she certainly found this undertaking entertaining and privately laughed at the expense of the weak-minded, she eventually bored of the staleness. Unadulterated fear was crude, trite - Nemeia savored the flash of optimism that crossed over the visages of those who believed they had witnessed their salvation. She realized that emotions should be served as a piquant dish and concocted new schemes to elicit her desired flavors, for her palate had become far too sophisticated for remedial lies.

Over time, Nemeia pooled her coins together and hired a gnomish surgeon to relieve her of the telltale feature exposing her chaotic disposition. His precision and handiwork was unmatched: she need only commit to lacing her tresses with a growth potion to ensure their golden volume would conceal the scars. She had delighted in bemoaning the racial stigma she faced and even inspired the pity of the doctor, who ultimately adjusted his price.

In the wake of her newfound innocuous appearance was a self-styled "half-elf" determined to cope with a mismatched family and powers she trained out of dormancy. She now seeks to console others who similarly crave a sense of belonging and purpose in a bewildering realm. This "generous" ally answers to the name of "Daefera Eirel", which roughly translates to "champion of the light" in Elvish.

Goals: Elegantly dupe others, then feed on the decadent energy of their commingled hope and continual anxiety that they should be achieving "more".

*A prideful fighter who desires a steady stream of praise would likely covet Daefera's ego-stroking.
*A journeyer down on his or her luck may need an uplifting vision to keep a battered morale intact.
*A lovelorn romantic may require the antidote of a companion who is just around the bend - Daefera can feel it!
*A mercenary lacking presence may require a consultation to enhance his or her visibility in taverns.
*An Elvish purist may wish to put Daefera to the test.
*Individuals with fortified values and refined intuition may enjoy being mighty suspicious of Daefera.
*Bored town elders or any idle soul may fancy a Talis card reading.
*Champions of authenticity may wish to invite Daefera to develop a genuine sense of self.
**Folks who don't mind parting with their gold will find Daefera more than happy to unburden them.