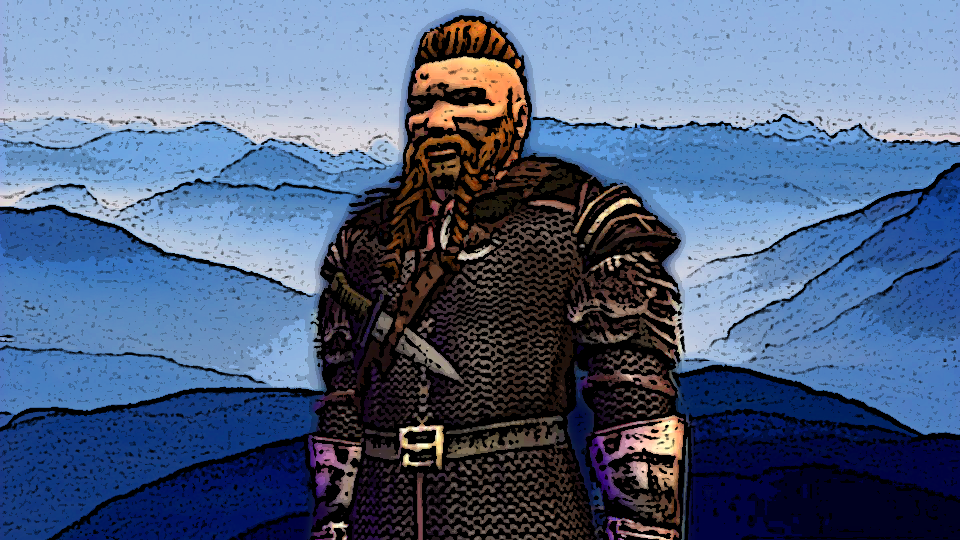 Backstory
Born as the second son to small merchant company in the mining town of Glen, Higan grew under the protective and pleasant wings of Ashabenford. Losing his mother at an early age, Hammerfist boys were met with many pitying gazes from the townsfolk but they were happy. By all means, the family was not rich but they were fortunate than most.

Majority of his childhood and young adult years had passed with looking for ways to escape from responsibilities and skip his studies. Studies that were meant to teach him the ways to run their business with his brother one day. But sitting in an office and deal the ore and the gems did not suit young Higan, he was to chase those riches and be the finder of such things he believed. He had to be one who laid their eyes on the shiny veins or clusters of gems. Travelers from both below and above the grounds fascinated him with the goods that they have brought with them, and they were plenty of them that made Higan's cravings for exploration unbearable day by day.

It took him many years of struggle and many arguments with his brother and father to convince that what they do was not his calling. But eventually, friendly talks the caravan masters have become offers to company them to the shorter distances, traveling with caravans on trade routes have become expeditions to the uncharted parts of the realms over the years.

Decades have passed with travel and small pockets of quality time with family, almost as if a routine. The business prospered with Higans first-hand findings and his brothers trading smarts. Higan never got married or had any children, -not many were willing to settle down with the burly never-at-home dwarf- but he loved his twin nephew and niece as of his own. Eventually, his father passed away of old age with family and friends aside.

Coming back from one expedition, he found a broken home that shattered his merry life. During his long absence, his brother and family were killed because of a stupid feud stemmed from petty business rivalry and that the perpetrators had been hanged. Not even being able to avenge his kin, Higan found himself to spiraling down on a path of grief and anger, led by the bottle. It was a talhund of Dumathoin he used to travel who saved his broken mind, forcing him away from the bottled demons and on to a path of moving on. Steeling his devotion to his god and finding his lost will to explore once more, he closed the business, said his goodbyes and left Glen. For good, this time. Since then Higan is traveling the realms, above and below, seeking riches for the riches sake. His latest destination seems to be the Sword Coast, intending to explore it from top to the bottom.


Appearance
Higan is a tall and burly dwarf for his kind but he moves with great agility that shows through his large build. He has fair skin but it's cracked and tough from long years of travel in the wilderness. His hair is fiery red, a few white strands seem to be budding. He keeps his beard in two thick braids. Usually can be seen in traveling clothes or mithral chains dyed in darker shades suited for deep shaded forests or underground voyage. Armored or not, his outfit is obviously maintained and cared for. From the composition of his setup, he seems to prioritize practicality over aesthetics. One would not describe him as "handsome" for dwarven standards.

A worn helmet, half made of scales can be seen with him at all times, it seems to be the oldest piece of equipment he carries.


Personality
Higan can be seen with a merry and cheerful demeanor. He is mostly carefree and laxer than the stereotypical dwarf. Rarely he gets angered and even when he does, it blows away quite quickly. He does not care much for strangers but will go long ways for friends and family.


Faith
He is a follower of Dumathoin, chasing the ore and gems wherever they might be. He is always on the lookout for opportunities to explore venues he might encounter such riches.

Physical & Mental Health
Being at the end of his middle ages, Higan does show a bit of weariness that comes with age, perhaps even a bit more than it should but apart from that he shows no signs of a particular disability or ailment. He has periods of overwhelming emptiness due to lack of direction in his life and a yearning to belong to something, during which old drinking habits trying to creep in but he has been able to stay straight on his path so far.


Languages Spoken
He is fluent in Dwarven, Elven and Sylvan. Unlike most of his kin, perhaps due to being at close proximity to a major trade route during childhood, he does not seem to have a particular accent when using the common tongue.


Plot Hooks & Miscellaneous
-
Hidden: show
Any sort of expeditions and scouting activities are of interest to him. His main terrain is underground but he has been trained to be able to track and hunt in various other terrains as well.

He is someone that desires for some sort of belonging but too afraid to make direct contact with people for that purpose. Any sort of dwarven interaction is highly sought after but he'd never admit that he is lonely.
Fignar Brokenshield - The Melancholic Defender
Higan Hammerfist - The Stalker of Caverns
Top
Post Reply
1 post • Page 1 of 1