The Orc Wirg and Krumarth sit around the fire in Soubar with a dire boar over a spit. The Orcs who live in the little village join him, partaking of the food while they converse in the crude Orcish language. There's a bit of back and forth, but they all seem to come to an agreement of sorts and Wirg heads into the bar to talk to Mags when all is said and done.

Though time passes by since sabotage was detected on the walls of Soubar, Brigitte's watch over the wall has not. She continues her hawk-like vigil to ensure the workers and the wall are protected. Workers on the wall get a friendly smile. People who don't belong near the wall get a warning glare.
Top

A certain albino tiefling and a cowled woman of short stature held off two large waves of devils, stopping them just before the entrance of Soubar and pushing them back to the Boerskyr Bridge. Tents and barricades burnt in the skirmish, leaving the Ebon Blades camp destroyed.

Several were witness to the tiefling barbarian flying into a rage after the incursion was over, snapping at onlookers and tossing a shovel into the flames. When bandits arrived to survey the carnage on the bridge shortly thereafter, he slaughtered them on the bridge most violently.
.:Marietta Starling:. Herald of Darkhold and the Zhentarim. Loose cannon.
Freedom will not bring a better tomorrow.
I'll be the one to protect you from
Your enemies and all your demons
I'll be the one to protect you from
A will to survive and a voice of reason
-Pet, A Perfect Circle
Top

At the Boerskyr Bridge, a comely blonde woman who seemed to possess an otherworldly glow exchanged quiet words with a blind tiefling. She pointed to the ground and upon a whispered command to kneel, he did so. She sat on his shoulders when he stood again as a makeshift soapbox, and she proceeded to deliver a speech to the small crowd guarding the bridge.

The themes included happiness in submission to Bane's will, the loss of freedom spelling an end to evil, peace in totalitarianism, and the flock requiring guidance of a firm hand. A slightly heated discourse about Soubar's political position followed. Eventually, the blonde woman headed south, as composed and unruffled as she arrived, with the blind tiefling in tow.

Soubar's unofficial wall guardian still maintains her vigil to keep the fortifications of Soubar safe during their construction. She talks with different characters in Soubar, from wererats to pixies to even the mindflayer. Whatever she's talking about she doesn't seem to be happy with the results. Daily, Brigitte speaks with Mags giving reports about the wall's development.
Top

FearBeforeTheFlames wrote:
Sun Jul 28, 2019 1:04 pm
A bustle of activity is heard upon the Northern Tradeway as efforts are made by several known residents of Soubar in creating a withdrawal camp for the warfront. Tents and supplies are brought out to the evacuation position via teleportation circle cast by Kordren Ivatrix; it's location nestled in the Trielta Hills. With the combined efforts of Baron Greil Nightgale, Kordren Ivatrix, Astere Laroux and many others the camp slowly took shape.

Zeke Slywit and Zeland Belord lended their aid in assuring such a camp was stocked with supplies and reasonably fortified as a retreat position. Alland Lyonson III and Brigitte Degenhardt each rotated watch on the Soubaran wall, ensuring the wall remained ever-watched while assisting in the camp's construction as well. After several days of preparation; the camp was prepared to house any civilian population that may need to escape Soubar. The area was set up with wards of alarm and concealment by Zahven Thruel and Kordren Ivatrix with assistance from Kaitlyn Mendt; and guarded diligently by Kordren Ivatrix and Astere Laroux, whom have taken up temporarily residence in the camp until the situation changes. ((OOC Note part 2: The location of this camp, while in the Trielta Hills, should be considered placed -away- from the Halfling and Gnome communities of the region.))
Alexander Marshall - Duty Bind
Fear "...I had hoped they had known me better than this."
Kordren Ivatrix - A Tale of Loss and Darkness
The"It is inevitable."
Miraj al Mtair Dhafir - The Wind of Change
Flames"You bear the treachery of Shaundakul."
Top

Rain wrote: ↑
Mon Jul 08, 2019 10:08 am
"Indeed, as I said. What you bring me is what I pay you for. What you yourself decide to bring me if up to you depending on how much your looking to earn for your troubles." "I'm not asking for hit-men, there are no targets. "And I care not how you produce what I want."

DM Arrakeen wrote:The mercenary peeled the rest of the meat from the bone, nodding to the hin. "Fair enough. We don't have the time for murdering random adventures now anyways," the thug smirked. "There are enough corpses around for us to pick up, deliver and get some gold," he paused. "Where do you want us to leave these now that Boareskyr is a little bit crowded with wanna-be heroes?"

///This woman appreciates your understanding

"I had a small talk with the captain of those ebon blades yonder, seems he doesn't mind where they go as long as their Out-of-sight, Out-of-mind. For the most part though I have a nice place for you to bring them, it's not at all out of your way either. . ."

"Drop the merchandise off here as often as you wish. I or another of my guys will come and collect. Afterward once we have it you'll get your pay directly or of course if you need favors or something -special- that can be arranged too, your choice really."
Cerebella Dreambreaker - Insectomancer 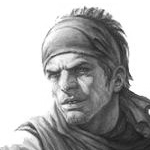 Some distance outside of Soubar along the side of the road, there lies a mangled, shorter than average, muscular male dressed in leathers that’s burnt up and torn. The body is lifeless. It’s features are burnt by acid beyond recognition, and ears cut off as though by a dirk. A rapier and shield lay next to it.
Harlos/Harlros/Zylros - Retired
Vuzlyn Torate - Retired
Top

A darkly clad man steps forward to the Establishment of Pyria the Alchemist and the two speak briefly some even hear of an apology come from the man. Shortly there after he and a handful of the Merchants are seen entering into the Winding Way.
Greil Nightgale Captain of the Ebon Blade
Top

Two weeks ago:
The rain fell heavy from the nights sky as two women in the dim torch light were seen gathering supplies before heading out towards the Northern Tradeway.
Both there clothes bore the same insignia: That of a Blackrose. They both Had pack horses with them and once they ventured out of Soubar they faded into the Black. The following day, rumors would come in of an undead force being camped and established in the ruins on the Northern trade way but three days later the Host would move north towards Dragonspear where it would disappear.

Present Day
Neither hide nor hair has been seen of the Lady known as Blackrose since that night
Morgan -Servant of the Dark Three, The Lich Queen, The Corpse Crafter, The Undying.
"Do not weep in your defeat, In death you will serve a greater purpose.. Mine! (Semi Active)

Amos Thistle - Knight of the Blackrose. (Active) "There is a time and place for everything"
Top

A group was seen making rounds about the village last night.
Lady Blackrose, and Sergeant Tytos of the Ebon Blade walked among the tents of the settlement, with a small entourage of minions in tow.
They spoke to passersby and merchants, asking about recent happenings and anything unusual.
Observant folk might see a semblance of a patrol in their behaviour..

With Winter's rapid approach, and no end in sight to the Devil's war of attrition, Soubar's population has been dwindling these past few months.
Despite this, Derringer Mercantile, the Soubar-based traders of all things magical, has seen a recent surge in activity.
New hires are spotted, packhorses in tow, in the various taverns and inns around the Western Heartlands.
They would be seen meeting with local traders and coaxing rumors of ruins and riches from the oft-drunken patrons within.

Posters are pinned to the message boards, on which are written offers of gold for magical scrolls.
The company is also seeking to hire a skilled alchemist.
Vaelen, the proprietor of Derringer Mercantile, might be spotted in the Winding Way Tavern, sometimes buying rounds of drink for Mag's patrons.
Tytos Lyonson - Ebon Blade Sergeant
Vaelen - Proprietor of Derringer Mercantile, hedge-wizard, politician
Griff - "Guide and forester"
Top

There was a commotion outside the Ebon Blades Barracks between Bueroza, Ebon Blade recruit, and Marietta Starling of the Zhentarim involving a poisoned white steed (Boberto, one of Darkhold's finest destriers), death threats, and a brief scuffle that ended due to the intervention of a tiefling named Hinzel. At this point, Marietta stormed off, shoving aside Dread Knight Bob Thairo who had just arrived to the scene. The spectacle drew quite a peanut gallery.

Over the past few days, Derringer Mercantile has been bustling with activity.
A new, larger tent was set up alongside the other owned by the company. Several out-of-work tailors and seamstresses from the community have been hired on temporarily, for a large project. Hunters have been seen dropping off wolf hides at the business for nearly a fortnight.

Finally, Vaelen would send his employees to spread a message throughout Soubar:

In light of the Devil War and Winter's approach, Derringer Mercantile will provide a warm wolf-fur blanket for every man, woman and child living in the settlement. We bring you this quality product -Free of charge-
This is the beginning of a community improvement initiative devised by Mr. Derringer, named 'Soubar's Great Leap Forward'.
Residents are invited to make their way to the Company tents, to be issued their new blankets.
Tytos Lyonson - Ebon Blade Sergeant
Vaelen - Proprietor of Derringer Mercantile, hedge-wizard, politician
Griff - "Guide and forester"
Top
Post Reply
146 posts