Arturi Valdaska - A Gur of the Coast

Arturi Valdaska - A Gur of the Coast 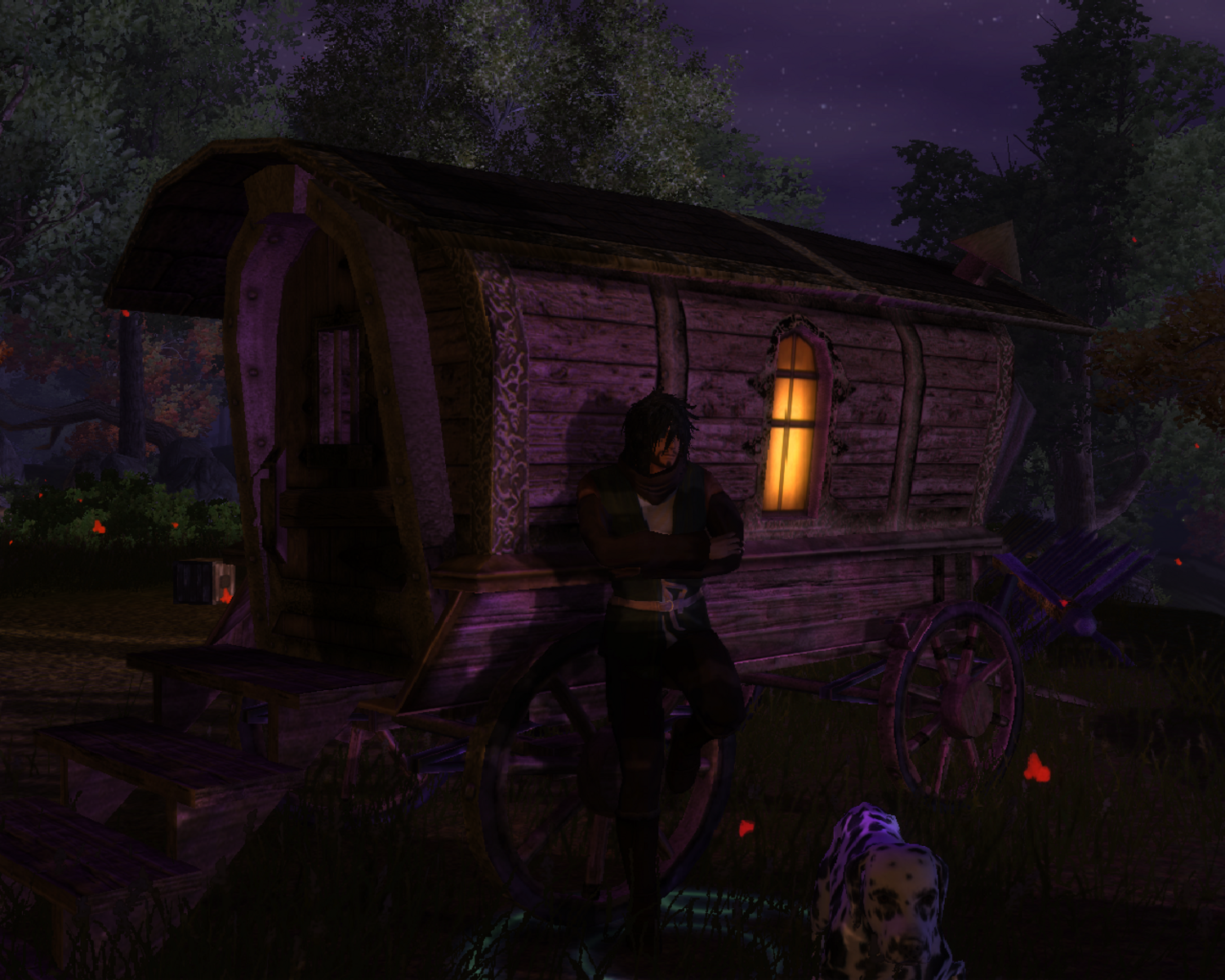 Hair: Black and messy, due to a seeming lack of interest.

Eyes: Golden, reminiscent equally of celestial heritage and that of an animal.

Height: Tall, for a Gur.

Distinguishing Features: Other than his eyes, Arturi has birth marks of the silver stars of Selune on the back of his right hand, and on the left of his neck just below the ear. The more exposed Arturi's body is, more markings are revealed on his torso and arms to a count of seven total. His hands are also rough and callused much like a laborer's.

--Arturi's background is portrayed by testimonials from different people he has crossed paths with. They are told to a theoretical listener, as if they have inquired about Arturi. It leaves a lot up to imagination while giving unique insight and perspective into the character's past.--

Orjin Bihkesh, a Gur from the Krodali caravan. Spoken to on the side of a road.
Hidden: show 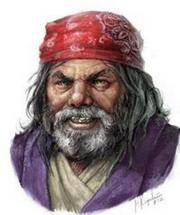 "...Aye, Arturi Valdaska? Good boy, mother's boy. Good family. Although none I've spoken to have heard of their whereabouts as of late. The Valdaska caravan is a strange and isolated one, even by our people's ways. Some tell Selune saw fit to punish them for some deed. A few say they're trying to escape a debt they can't repay. Others mention they've headed west, to seek coin through work...

Most outsiders wonder how to tell one group of Gurs from another. Well, I could go on for some time about that...but one way to tell is in our crafts, our professions. The Valdakas? Their craft is War. Not fighting no, Gurs tend to avoid conflict when possible. There's always exceptions however. You see, wars aren't fought with just warriors alone. Armies need weapons and horses. Soldiers need their wounds tended. That is where the Valdaskas come in. They're camp followers, for a price...and have no qualms about the folk they deal with, no matter their morality or where their loyalties lie.

Rumor has it that "a Valdaskan horse has never thrown a rider, and a breastplate forged by their hand has never been breached". They make for good healers too, even using poisons in some of their work. You may be thinking that I'm exaggerating their skill. Perhaps, but remember this: the best stories carry a grain of truth. And that grain could be far heavier than one realizes..."

Gherod Jenkins, a travelling peddler. Spoken to at a small tavern in the country.
Hidden: show 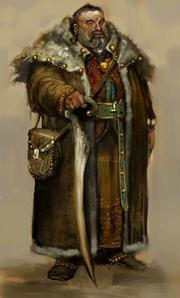 I was traveling my usual route between Athkatla and Beregost, just me, my wagon of goods, and my prized "spotted dog" that was going to land me a fortune. People with coin tend to buy exotic things in my experience, and I ain't ever seen a dog like that. Easy to transport it too. Just slapped a chain around it's neck on the back of the wagon and had it walk itself, smacked it around to keep it in line. Fed it just enough not to drain my purse dry.

So, I'm on this long stretch of road, and I notice a man walking twenty, thirty wagon lengths behind me. He camped when I camped, ate when I ate, but never moved a step closer. After a couple of nights the man came stumbling up like a fool with a bottle of wine in each hand.

"No use in drinking alone. Why not share a drink and the night? Road's quite dark this time of year, wouldn't hurt to have an extra set of eyes around the fire, eh?"

That's what he said when he walked up, but slurred as if he'd already helped himself to one of the bottles. I figured, this drunk fool wants to share two bottles of aged Berduskan Dark for no payment in return? Tasted odd, but still fine enough to drink. His loss I thought, but I was wrong.

I was the one who lost when I woke up to find the dog, and the man gone the next day... I'm going to find the Gur, and collect what's due... with interest...."

Fiona Alders, a widowed farm owner. Spoken to over dinner in her home.
Hidden: show 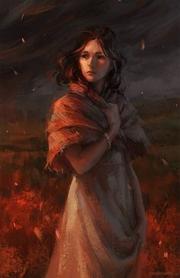 "...I'm not in the position to give hand-outs you see, owning a farm whose workers were leaving by the day because "a woman can't run this farm alone"... But I made an exception for one man. The man you're asking about. The one with the spotted hound.....

It was a storming that night, and the stable door made a loud "crack" against the barn from the wind. I gathered my cloak and set out to close it, wondering how long it would take for me to settle the fears of the horses and cattle. As I left through my door I could see a man, slick with rain, closing the door behind him and the back half of a dog entering the barn. I grabbed the wood splitting axe by the front door and approached, terrified for what the man may do either to me or my means of living. I made my way out to the barn and opened the door as quietly as I could, hoping the rain and the terrified animals would cover my approach. As I opened the door it squeaked louder than I had thought. You see, there was plenty of noise from the rain. Not a peep from the animals. A small lamp came to life amidst the darkness. There he was, with one hand on the lamp and the other on one of my stallions neck, faintly whispering and humming to it and all the animals nearby. He looked in my direction and at that moment I realized that he was more fearful of me finding him than I was of him trying to pull something.

Arturi stayed with me for the summer. We became close friends. Nothing more than that, mind you. He was always eager to help with the work around the farm and to repair broken tools or share a tid bit of "family secrets" with me about the horses. He never shared much about his history. So... one night over dinner, just as you and I are right now, I confronted him about his family and why he was separated from them.

"Why not find other Gurs like yourself then, find a new family." I asked in return.

I knew what he meant, but it stung none the less. He gave me a faint smile, then noted with what I would describe as a dull anger...

"No, I will profit from suffering no longer. I'll take to the road. Find out about things I have been kept from for far too long."

At the end of the summer, we said our farewells. He carved me this beautiful horse as a parting gift. *she gets up and walks over to a nearby table, where there are carved wooden horses no taller than two hands width. She grabs one and brings it back to the dinner table* Two summers have passed since we last said our farawells... A courier makes his way through here every once in awhile. There's no note, no message. Just a small wooden horse under his arm..." *she takes the wooden horse and with a good amount of force, pops it's head off at a barely visible separation at the base of it's neck revealing a small stash of gold coins*

Kezia and Menowin Valdaska, cousin and uncle of Arturi. Spoken (but mostly "listened") to while returning to the Valdaskan caravan from market.
Hidden: show
Kezia
Menowin 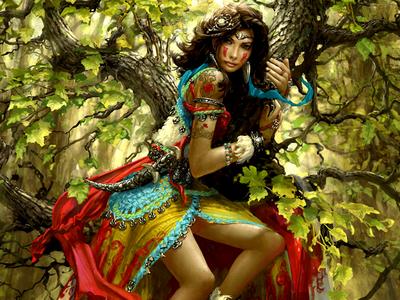 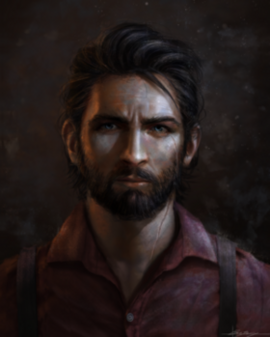 ".... I'd almost forgotten about that, Kezia!" the man known as Menowin Valdaska said in his impossibly deep voice, followed by a rumble of laughter. "That boy could have passed for a tomato he was so embarrassed."

A contrast of light melodic laughter mingled with that of her fathers as Kezia spoke "I'm going to swat him so hard with the horse tether when he returns. What a fool, running off to the Coast. He won't survive a moon. Arturi is sensitive you see-"

She's cut off as Menowin interjects. "He's not sensitive, Keziah. He's Vadoma's son, your aunt's only child. You know exactly how tough she's been on him. He just... makes things more than they need to be. He's a man who is worried about the use of the blades he smiths, rather than their price or quality. Men will continue to slay each other, or knock arrows at a new threat. It's not our place, nor our way to judge."

"I'm not saying he's made of glass." Keziah replied with a smirk. "After all, it was you who taught him everything he knows...Captain."

Menowin continues with "When Arturi was born....he was Valdaska, but he wasn't like us. He was born with grey blemishes from his neck to his arms and eyes unlike ours. We took his birth as an omen that we'd displeased Selune, but Vadoma reassured us again and again that his birth was a blessing in disguise. He was one of us...and also completely alone at the same time. That is how he thought too, I believe."

He frowns. "Regardless, every boy needs a man to guide him. Nephew or not. I only did what I thought would honor his father."

"He was frail and uncertain, so I taught him how to smith so that he may grow strong, and feel a sense of control while shaping the metal."

Keziah took over. "He faltered often, so you taught him how to tend a wound so that he would make decisions when they mattered most."

She looks to her father, then to the ground with a frown. "And then I... He was unhappy, so I taught him of the horses and what made them content. He said that he understood: The horses were happy when directed by a firm hand and taken care of... But some found a certain peace when allowed to run free...."

Menowin moved closer to wrap an arm around his daughter. He then said, "Aye, but he's Valdaska, and he belongs with us...with his family. Besides, Madame Vadoma has the final say of our caravan. And she's made it clear that she hasn't let go of his reins yet..."

Keziah smiled, "He'll come back to us...and then I'm going to hit him so hard between his stupid gold eyes...." 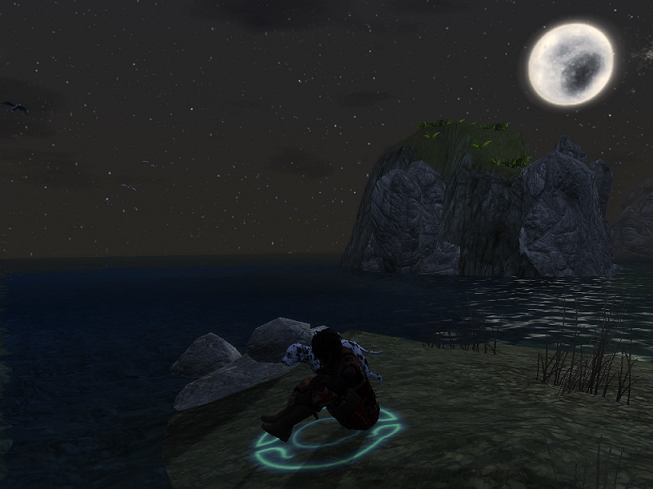 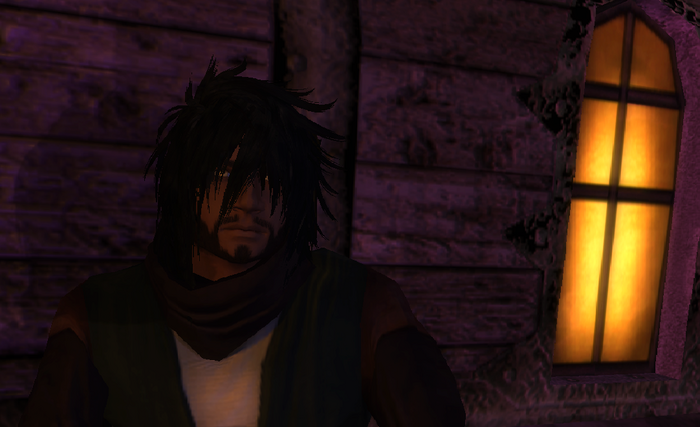 Last edited by Requiem on Fri Jan 24, 2020 12:02 am, edited 14 times in total.
Arturi Valdaska - Nomadic Smith, Horse Whisperer, Medicinal Herbalist, and Tracker.
One of the "People of the Highway" and forever a "Child of Selune".
-Biography-
Top

((Updated a few things and edited for clarity))
Arturi Valdaska - Nomadic Smith, Horse Whisperer, Medicinal Herbalist, and Tracker.
One of the "People of the Highway" and forever a "Child of Selune".
-Biography-
Top
Post Reply
2 posts • Page 1 of 1