Unable to move but for involuntary twitches and occasional spasms, Bran Ludwakazar had been restrained in the Scarnfell infirmary. At times, the priests would pass prayers over him, but his only response was in the bulging eyes which would normally have been accompanied by feverish expletives. Now no lip reader could fathom those silent curses and, given the old man's tendancy to night-grimacing, Guern could not be sure if his grandfather was even awake. He loomed a bit closer over the dying Dwarf, his hand resting heavily into the lumpy old matress.

"He's not dead yet -" Guern began and then recoiled as felt the seeping mess under his knuckles.
Guern looked to the nearby priest whose brows were dropping from surprise to anger.

"That was his arm you clumsy moron!" The priest shouted, his beard starting to bristle.

Guern's black eyes beaded into the wrinkles of his face, looking all the more like some bearded testicle. He coldly met the glare of the priest, then took a measured pace backward.

"Ham-fisted freak, you're as bad as each other!" The priest continued, now marching toward Guern and pointing his finger accusingly.

Guern placed his palm down on his grandfather's face, gently at first but pressing harder as the priest approached. He didn't look, but he felt the soft, weeping skin. Silently he pressed just a little harder, meeting only slight resistance as the old Dwarf's skull gave way.

It was no feat of strength though. Bran had long since spat out his last tooth and shed every hair, even having the ignomity of losing his beard. Then it had been the turn of wrinkled skin and muscle to waste and mottle into cankerous sores. Now it was clear his bones had softened too, and it was alarming to think anyone was still alive in there. He had become much worse in the last few years and divine magic had never reached the underlying cause, the best assessments suggested it was a grossly accelerated aging and Bran was already starting his fifth century in real terms.

There was no doubt that something familial was going on, Bran's father, mother and two siblings went the same way although they had not lingered so. Bran's children and some of his cousins had been developing the same condition, the grandchildren too, including Guern, who was reddening with rage.
With a burst of incoherent jowling, the cornered and prune-faced Dwarf lunged at the priest and the inevitable fight ensued.

Engineers, prospectors and alchemists, the Ludwakazars were clan specialists in the more esoteric ores. Behind locked doors, their huge laboratory was arrayed with rare and peculiar metals, crystals and glasses. Hundreds of jars were filled with gloopy liquid metals and glittering powders, large tanks glowed with luminous gasses and colourful flames curled from the mouths of their furnaces. Blocks of novel alloys littered the workspace, some giving off enough heat to fry an egg or warm a barrel of stout, it was a strange intrinsic heat born of the metal itself without any magical energy.
The whole family had been a bit of an enigma within the halls of Scarnfell, a bit creepy and deformed with an inbred look to them. They were one of three clans who had lost their home of Old Thostheim when its tunnels were frozen solid by the breath of Ilphax'qazaan. Though the dragon was eventually defeated, those passages would never be thawed and it would remain a tomb to those who were suspended in the moments of their death.
The Thostheim Ruby, the stone upon which those ancient halls were built and that which had started the Ludwakazar research, was long lost in the belly of that beast when it fled, but the family were so much a part of its traditions that they still could not turn from its mysteries.

The Ludwakazars had grown to resent the majority of the Scarnfell priests who would poke their noses into the family condition, casting their divinations, asking stupid questions, attempting to detain them for examinations, fearing that whatever it was may spread to other families. Some of the clergy did not care for the unorthodox worship of the three clans either for venerating the holy days of Crepitus and claiming he was a living aspect of Hanseath.
It was a few years after Bran's death, when Theurin took up the crown of Scarnfell, that the Ludwakazars formally declined the oathgiving at his investiture. Again without a home, the clan moved west and sought anew.

Guern was well used to the feeling of such distance. Working as a scout, prospector and mine warden, a mole of a Dwarf who would rarely be out of the tight tunnels that twisted for so many miles below the Galena mountains. His condition left him ever lean and hungry, eating almost anything that moved and much of what did not. He was at times requisitioned by the Scarnfell military to work alongside them in tracking and rooting out criminal mining operations, or sometimes left on watch as a living plug to a troublesome breach.
He was the odd one out of an inbred family, the product of a later marriage between the Ludwakazar and Dolvak clans which did not end well. While his half-siblings took Bran's inheritance, Guern was left with the memory of what he defended as a mercy killing and the scars from that priest's hammer. 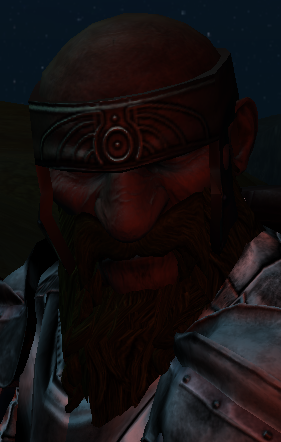 Shield Dwarf, male, originating from Thostheim, among the Glacial mountains of northern of Damara.
Aged 212, born of Brok Ludwakazar and Evelyn Dolvak.


A rather old looking Dwarf. His dark skin hangs in loose wrinkles and he's bald but for a beard which hangs in dreadlocks and eyebrows that were once jibed as being a potential comb-over. This, along with his lopsided features and crooked hands with partially fused fingers, have always left him on the fringes of polite society.
Though a ranger under Dumathoin's domain, he carries the symbol of Crepitus too, a foaming mug of ale that takes a significant place among the engravings of his mithril armour. The inside surface of its small, articulated plates carry etched prayers, poems and short tales of Old Thostheim, a labour of his long years sat in deep and lonely caves.
He travels with Sniffer, his only real companion, apparently an ore-sniffing ferret that is so spoilt and overweight that it looks remarkably like a small badger.
With his clan fragmented for the time being, Guern has now come as far as the SWord Coast looking for new opportunities, research materials and maybe somewhere to put down new roots.
Top
Post Reply
1 post • Page 1 of 1