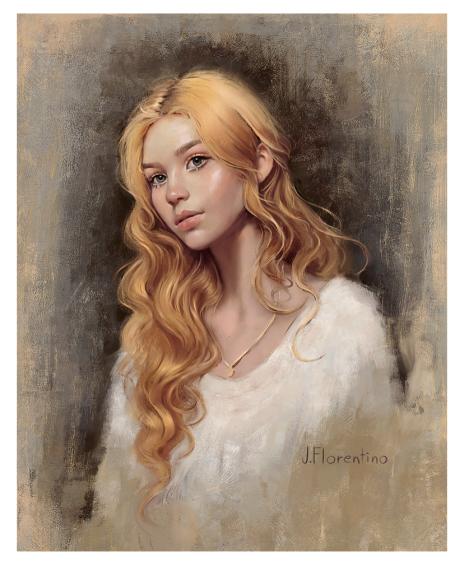 Gender: Female
Race: Human
Age: 18
Height: average - 5’5”
Weight: She is petite and lean, a body of dancer.
Eyes: Bright sky blue
Hair: honey blonde
Skin: Fair with flecks of freckles along her cheeks
Scent: sweet, like honeysuckles on a warm summers day
Physical Description: Someone would say she is gorgeous, lovely, stunning, pretty or beatiful. And Mirela would agree with all those descriptive words about her.
She is young with sun kissed honey blonde hair, with strands of shimmering gold running through the luscious thick waves. Her lovely hair framed a petite face who's full lips normally always wore a smile on it, mischievous or other wise friendly. Her dazzling sapphire colored eyes were rimmed with dark lush lashes.
She had an air of confidence about her, it was in the way she held herself with a head held high. Most would consider her very charming.

Personality Profile:
General Health: In perfect health
Philosophy: There is always room for one more song
Deity: Oghma
Alignment: Chaotic good
Languages: Common, Dragon and celestial
Weapon of Choice: A flutter of her lashes and a sweet innocent smile. If that doesn’t work a scimitar sheathed on her hip.

Habits/Hobbies: Is always thinking of new silly poems and songs. Normally can be heard humming some sort of tune.


Strengths: Performing and getting out of trouble with a sweet smile. Her short time on the road has made her an adept fighter.


Weaknesses: Normally does not have much fear and will go head long into danger if it means a good song, story or coin could be made from the adventure. She can be reckless and impulsive. She is horrible at directions and will get lost if left to her own devices.


History:
Mirela's had a rough childhood not unlike most that grew up in the river district of Athkatla. The poorest part of the city, where the streets stunk of trash and the sea. A place where the destitute and the seediest of smugglers and pirates came and went.

She was the youngest of the two children born of a women that had once been beautiful, before the dust and pain of the city settled on her; her name was Delia. Her mother was a working girl in a brothel nearest the docks. Her father unknown, someone Mirela's mother would not talk about, though the woman would say she could not remember all the men that came and went.

Mirela had been taught at a very young age how to pretend with a pleasant smile to get her way. She would be sent out on the streets to act or play her music for coin. Her mother was groomed from the Madam that ran the brothel, for any girl born under her roof was her property. Now Delia wasn't a horrible person but it was the ways of their word. She had even thought about taking a knife to Mirela's pretty face. She had gotten so close but the young girl had woken up with her mother standing over her with a knife in hand. Delia had seen the fear in those piercing blue eyes and could not bring herself to do it. The words of madam rang in her head as she scoped up her crying daughter: "That golden hair will fetch us a lot of coin."

When Mirela had turned eight her dearest brother, the one person she had loved more then the world itself, told her he was leaving. This was the person that kept her safe from the greedy paws of the word around her. Kept the eyes of seedy men off her. The person that taught her how to fight with sword and shield, that told her to protect herself at all cost. He was leaving her behind, It had broken her small heart to see Edwin enlist in the Amn's army. He was the light in her dark world: a true knight. He had promised to come back, and he had broken that promise within two years. He had sacrificed his life to protect the band of troops he was with. They had been on patrol in the cloud peaks, looking for a giant that had been causing trouble for the locals. Unfortunately it hadn't been just one giant that they had come across. Him and two others had distracted the giants long enough for the rest of the troops to call for help. No one can say for sure what had happened but the only thing that was left was blood on the snow and Edwin's broken sword.

At age ten Mirela had stopped singing on the street corner for spare change and took up a job as a minstrel in a circus. When they would travel from town to town her mother would pose as a fortune teller with the circus to keep an eye on the Madam's property. She couldn't let this girl be spoiled before being sold off to the highest bidder. Mirela made the most of this small freedom, to see other towns to breath air that did not smell of decay.
And then she met someone, an adventure. Someone that reminder her of Edwin. Sharp witted and reckless. To Mirela's dismay the circus had come again to Athkatla. Her mother warning her that she would no longer be allowed to travel again. That the Madam had sent word to bring them both home. That in a years time she would be sold off, something she had known about but did not expect it to be so soon. So that night she put on a happy face and sung her heart out, even though her mind was on the prison that awaited her. She was only fourteen, her life was just beginning. And at that moment she hated her mother, she hated her brother for leaving her and she hated Athkatla.

She quickly packed what little things she had and started to sneak out for the city. Of course she was caught by the men the madam had hired to watch her property. And as the mercenaries drug her roughly into the city Theo stepped in. She had remember seeing him in the crowd who could forget a mustache like that. Theo quickly disarmed and knocked the two hired men out. He spoke quickly saying he was already planning on leaving the city to find adventure; asking if she would like to come. She didn't know why she decided to go, she just shook her head a fled the city in the night, never looking back.

They have been traveling together for four years now. She has never really thought much about her mother, sometimes she wondered if the woman was still alive. She had a new family, Theodoric Rayne. He taught her about Ogmha and trained her more on using a sword and shield. She had taught him about poetry, which he has gotten pretty good at. Had tried to get him to sing, which he won't. They both are a bit reckless seeking adventure every place they go and perhaps that’s why they get along so well.

And now well she is happy as happy as someone like her can be. 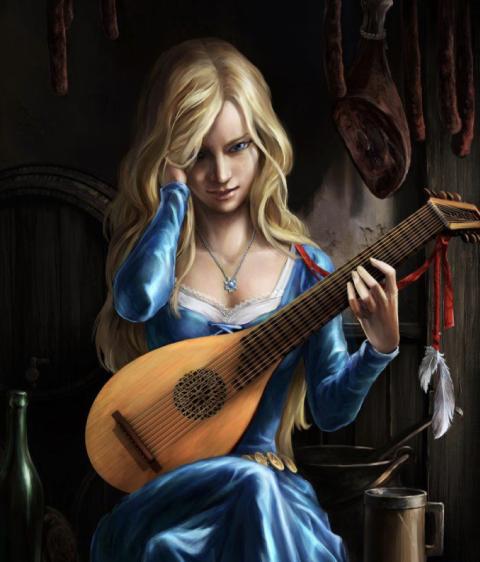 Long Term: Buy her mother's Freedom. Find her brother's remains. And become the best singer and performer in the gate.

Possible Plot-Hook Ideas: Mirela most likely has a contract out on her for escaping the Madam in Athkatla. The Madam wants her property returned to her. The Woman possibly works with the Shadow Thieves of Amn, but it has never been proven.
Top
Post Reply
1 post • Page 1 of 1