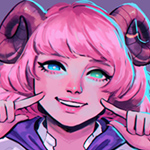 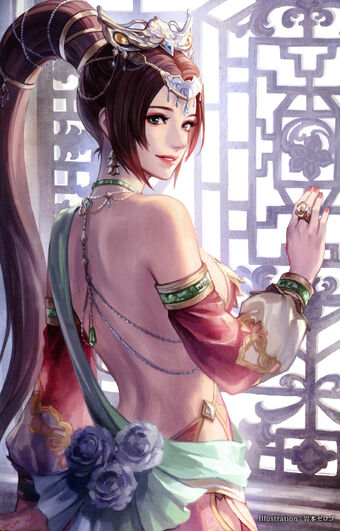 "Some flowers are too dangerous to touch."

Olivia is a slender, average height woman with a very refined look. She has sky-blue eyes, and fair, porcelain skin. Her face is delicately featured with thin, gently arched brows, defined jawline and chin, a small dished nose, and well-shaped lips. While quite curvaceous and busty, her body is also toned and very fit. Her chestnut hair is grown long. Unbound, falls to her knees, but she usually keeps it braided back in long, thick ponytail. She has thick bangs that fall over her brow as well. She always wears tasteful clothing and jewelry that accentuates her beauty without revealing too much.

Olivia is cool and calm, but she exhibits more maturity, aloofness, and ruthlessness when the situation deems necessary. Olivia is often seen by the others as a polite and ladylike woman. She has an aura of sophistication about her. She likes to look nice, and she loves cosmetics. Even though she's a little vain, however, Olivia is undoubtedly very kind to others. She is patient and caring, almost always offering a smile or laugh to a situation. She isn't the most social little bird (although she is extremely polite and calm), but when she does get close to someone it's because she truly wants to and often acted as a motherly figure to her friends. She dislikes being patronized and will not indulge others. Olivia is also very adept at using her tongue to get people flustered. She has this ability to play with words that would often leave her looking like someone who’s made an innocent comment yet the words have deeply burrowed into her target’s mind. She also uses her charm to flirt with men sometimes. She also has a healthy appreciation of aesthetics and beauty. A talented dancer, she equates each encounter she fights as a dance.

General Health: Slim and graceful
Deity: Sune
Initial Alignment: Lawful Good
Profession: Former street dancer, Monk of the Way of the Sun Soul
Base Class & Proposed Development: Monk
Habits/Hobbies: She is a performer; she sings and dances (ballet, formal, ball, exotic) and tells stories. She will often take old stories and retell them in her own words. She equates each encounter she fights as a dance.
Languages: Common, Chondathan
Weapon of Choice: None

Olivia is a beautiful, charming dancer, and also is a native of Baldur’s Gate. She was born under the roof of a poor family. She were abandoned by her parents when she was very young. After living a sad and hard life on the streets, Olivia began dancing to make money. She said to herself "I cannot go on like this!" She watched a dancer on a street corner and memorized all of her moves. She wasn't a very coordinated child and it was very difficult. She didn't have real shoes, so her feet were a mess of blisters, and she fell so many times that she was covered in cuts and bruises. It was painful and miserable. And very, very difficult. But she never cried. With time, she became famous for her charm and skill and was adopted by a cruel man, who raised her. Her adoptive father often hit her, even when she did not do anything wrong. She eventually fled from him, join to a traveling troupe of entertainers, who employed her as a dancer. They traveled the length of the Sword Coast with their performances, she danced from city to city, and the entire coast became her stage, until the age of sixteen, when she appeared more like a young woman than a child. During one of Olivia's performances in Waterdeep, the legendary city of the North, a noble man was smitten by her and plotted to kidnap her. However, a Sun Soul monk stepped in and prevented this. Initially, Olivia sought only refuge in the Monastery of the Sun, but found herself drawn to the disciplined life of a Sun Soul monk. They took her for who they saw and just chose to be kind. Olivia was amazed by their kindness. She had never seen people with such good will. Naturally graceful, athletic and in search of something in which to believe, she received her monk training. Order give her stability and purpose. She wanted to learn to be able to defend herself from a melee enemy. She wanted to be able to disable the target without actually hurting the target. She was not learning how to fight. She was learning how to survive if someone wanted to fight with her.

She became a skilled monk, and eventually took up adventuring. As the monks of Sune put it, the sun blows a kiss to the moon, and the moon blows the kiss down to the people. The sweetest light is that which we reflect from others. Now she try to live by the tenets of the Sun Soul monks. She pray that her light reveals the truth in darkness, offers succor to those in need, and obeys all just authority.

- bring joy to others with her dancing performances
- she returned to the Baldur’s Gate after many years to face her past and find her parents
- defend the common folk
- protect sites sacred to deities of light and good
- to fight in the name of good and beauty, destroying evil and vile creatures such as undead or fiends

- She still continues to travel around the world as a wandering dancer
- It is not certain why her parents abandoned her. She wants to find out
- She is very devoted to Sune, the goddess of beauty
Top
Post Reply
1 post • Page 1 of 1