She sat in the rug in front of their fireplace, her hair damp and hanging down her back as she let it dry. A simple looking and well loved dagger lay within reach, and in her hands she held a fine leather journal.

She'd picked it up on a whim when she'd gotten Emmanuel's name day gift. It seemed to call to her like it was made just for her. Her finger traced the wolf embossed on the front. Each page was blank and waiting to be filled. Trouble was, no matter how long she stared at it, she had no idea what to write. She never had anything worth remembering before. And now. . .now there was so much she wasn't sure where to start. She wasn't even sure how. It was no secret she wasn't a writer.

A small sigh escapes her mouth and her amber eyes move from the journal to the fire. Maybe another night then. For now, the pages remained blank. Her hand slid over and picked up the dagger as she stood. She moved to the bed and laid her dagger in it's place on the nightstand. She carefully set the journal there too.

Her eye caught sight of the little wooden wolf that had been carved for her. She picked it up and looked it over, the corners of her mouth turning up a bit. Her fingertip lightly traced the initials carved there before she carefully set it back in it's place on the table and climbed under the covers.

She fell sleep with a smile on her face, her thoughts on a great white wolf and just how lucky she was. 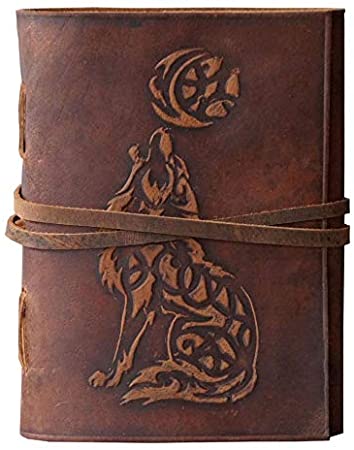 Re: Lone Wolf no Longer

She had been curious all day long. Emmanuel said he had a surprise for her and she had no idea what it was. She wanted to ask questions, wanted hints. But, she held herself in check because she didn't want to ruin his surprise. He grinned randomly throughout their day. After the last several days in a row being full of drama and heartache and just plain difficult circumstances, it was so good to see him smile like that. She wanted it to last as long as possible, even though it meant keeping her curiosity in check.

The moment finally arrived. He wanted to present her surprise to her at the Lewd Lyre. She'd assumed that he'd written another poem. But, the actual surprise was much more. Her eyes widened a bit as he pulled out a lute. A lute! When did he learn to play that? She could tell he was nervous and she gave him a reassuring smile as he stepped onto the stage and looked her way.

He had written a poem, but he'd set it to music and sang it to her. She wasn't sure how he'd kept it to himself so long. This was obviously something he'd been working on for quite some time, and it warmed her heart. This man with the gorgeous green eyes, so uncertain of himself on the platform, so uncomfortable in the city had learned the lute, written her a song, and performed it with an audience!


When your world comes crashing 'round you, when your back's against the wall.
When it seems that you can not find a way out.
When all life hands you is sorrow, when the ocean is not calm.
When your smile has been turned into a frown.
When all you can see is trouble and there's fire ev'ry where,
And it seems no one will care enough to help you through your cares.
When the lightning crashes 'round you and the thunder roars real loud,
I can tell you this right now, my friend, that you don't have to bow!
Don't lose hope when all that you can see is darkness ev'ry where.
Don't lose hope; someone will come to you to shed light on your fears.
Don't lose hope 'cause bad things happen and they seem to get away.
Don't lose hope; we'll keep on going and we'll make a better place.
Don't lose hope!


It was perfect. They'd been through so much in the last several days. And some of those lines nearly brought a tear to her eye. "We'll keep on going and we'll make a better place". She knew she could with him at her side. She could do nearly anything.

As the last note finished and he walked off the stage, she moved to him and wrapped him in a warm hug, kissing his cheek. "Well done, Meine Htag", she whispered. He told her he had more he'd learned, but she hardly heard it, that last line was still ringing through her head, "We'll keep going and we'll make a better place." She smiled as she took her seat next to him and sipped her ale. A better place, indeed. Her whole world was better with him in it.
Top

Re: Lone Wolf no Longer

To anyone who passed by and cared to notice her, she appeared lost in thought. Occasionally she'd frown, more often than not though, the corners of her mouth would turn up.

She knew sirens were trouble. Beings to be careful around, if not avoid altogether. When she saw one on the beach, one who seemed interested in her husband, she stood by quietly, holding him close while the Archdruidess spoke with the siren. The siren didn't linger long after Ashling showed up, but she did leave a gift for Emmanuel. A single perfect pearl. She wasn't sure how to feel about that. She was told a gift from the fae weren't to be taken lightly, but she wished Emmanuel could have tossed it back in the water. It made her feel uneasy, him getting the siren'ts attentions.

She remembered the feelings she had after. She felt so helpless, so worthless, so weak. Emmanuel had been through a lot in the days before. He'd handled many dangerous things, and she hadn't been there for a single one of them. She grew restless and angry with herself and left him standing there on the beach with friends. She headed off with a plan in mind to go do something brave on her own. She was going to face the snakes, that's what she'd do. She'd prove she was brave and she was strong.

She found her way into the Gate first. She went to the temple to get Tymora's blessing on her stupidity. On a whim she decided to also see the palm reader in the East Gate. She frowned as her fortune had been made. Seems even the seer agreed with her about being weak. She walked away with a heavy sigh, deciding to go back to Emmanuel and the others.

She hugged Emmanuel from behind, resting her forehead on his shoulder. "I'm sorry." She whispered the words quietly. "It's not your fault I'm weak." She'd been so awful to him, and it wasn't even his fault. She just felt sorry for herself. She quietly confessed what she'd been about to do, and then her eyes grew moist as he spoke to her.

"You are not strong, but the absence of strength doesn't mean you're weak." He spoke quietly, pausing to let the words sink in before he spoke her own family quote back to her, this time loud enough for the others to hear. "The strength of the pack is the wolf and the strength of the wolf is the pack."

He was right of course. They needed each other.


(( Big thanks to DM Bloodvine for the story! ))
Once she was more herself again they decided to go swimming at a different beach. She felt some relief that they wouldn't be lingering at Ulgoth's any longer, where the siren might return.

By the time they'd all changed and gotten into the water, she was happy and carefree again, joining in on the splashing and laughter with the others. It was short lived. She could hardly believe her eyes when she saw the very same siren coming toward them. Was she following them? Following Emmanuel? She stepped close to him, eyeing the siren. She felt protective as she watched the siren admiring Emmanuel. Didn't she know he was hers? Did she care that he had a mate?

As she watched the siren, something shifted inside her. Instead of feeling protective, she felt envy. This siren was perfect in every way. The others began talking to the siren, but she barely noticed. Without realizing what she was doing she began mimicking the siren's stance. She wanted to be just like her. Beautiful. Confidant.

She suddenly heard the siren say something about being lonely. Without a second thought she said, "I've felt lonely." Her heart nearly skipped a beat when the siren acknowledged her and the way she understood loneliness.

" You understand, don't you?" The siren'ts eyes landed on her. Her! "Yes, you know, you like the water too don't you? Wouldn't you like to be free, but not lonely."

She heard The Archdruidess say something to the siren and caught the words, "She's not lonely anymore", come from Emmanuel next to her. She ran a hand down the scar on her thigh. Maybe if she didn't have scars, she could almost be as beautiful as the siren. Her mind was definitely not on those speaking around her. She took a step nearer to the siren.

The siren spoke again, "That's it darling, loose and free and untamed, the ocean's sister, her child, her wild little off spring, aren't you?"

She felt a pull on her arm and allowed herself to be brought closer to Emmanuel, though her eyes never left the siren. The siren played around them for a bit, and some more chatting was done. Ashling just quietly observed. When she finally turned to leave the group and head back into deeper waters, the siren brushed her hand across Ashling's shoulder. When the contact was broken, Ashling reached up and rested her hand where the siren's had been. She'd been touched by this beautiful creature and wanted to follow. She wanted to be friends. She smiled. The last thing the siren said to her was said only where Ashling could hear it. The siren wanted to be her friend too.

One thing she did know for certain, if the sirens ever needed help, she'd be there.
Top
Post Reply
3 posts • Page 1 of 1