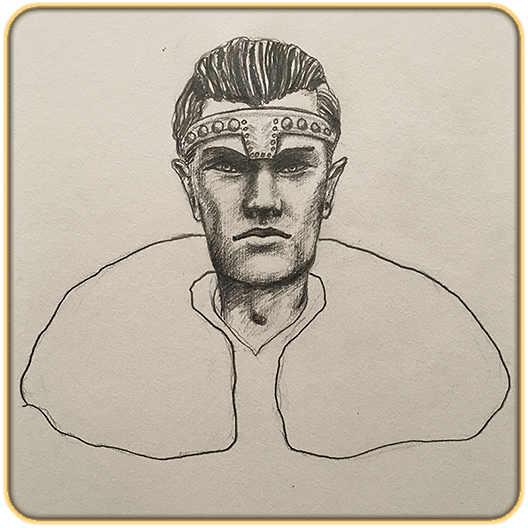 Every story has a purpose, and for why it is told, remembered or even sold....
Is your life purposed enough to warrant a tale be told about it?
Jon Smythe

Characteristics:
Some adjectives describing Jon Smythe's character are: self-reliant, helpful, courteous, kind, respectful, sensitive, friendly, loving, merciful, gracious, humane, altruistic, giving, respectful, and protective of life. His once great charms seem to have been replaced by a tactical intelligence, but still the ability to undermine his adversaries with piercing words—what many may attribute to some years in the merchant trade (or something else). A once sly way with words has changed to a greater inquisitiveness that seems to have led to general greater knowledge of so many things. As always, he is one skilled in following a hunch, specifically his own.

Appearance:
An above-average height half-elven man, with a sturdy physique and working strength in his arms. Though his facial features are more generically human, whatever amount of Elven blood he carries is distinct in the characteristic ears, eyes and mouth. Casual observation shows a half-man of some fashion sense, albeit of a passé style from a few decades back. Preferably, he keeps clean and well groomed.

Casual Attire: Jon Smythe was once well known to sport a broad-rimmed black hat, and cloth attire of a passé style of the Moonshae Isles. Later, he acquired a piece of headgear that focused his skills with the sword, and since then, his trademark black hat was placed in a safe and stored trunk. These days...he seems to be redefining himself again. When casually attired, he prefers grayish tones and thicker fabrics, anything that is both comfortable to the skin and protects against the moist air from the Chionthar.

Adventuring Garb: Smythe possesses a set of mithral chain mail armor which has been custom altered to support his keen-blade fighting style. Engraved upon the chest piece are two symbols: a seagull flying over waves, and a stylized unicorn's head within a circle. Upon his waist belt is sheathed an exotic long blade in a black, polished wooden scabbard with golden designs engraved—possibly one of the finest looking scabbards seen.

On his person, in general, can be seen a number of pouches at his belt, and opposite a number of wands, which would describe him as a master of devices. And without doubt, his trademark Bookseller's Valise is more than often at his feet, where ever he may travel.

Personality Profile:
General Health: Appears above average and healthy, for age and physique. Fit physique for a half-elf, but more specifically, his body is toned for swordplay.
Deity: Politely praises the Merchant's Friend, but his most recent travels has him praising the Helping Hand.
Initial Alignment: Neutral Good.
Profession: Ex-bookseller. Amātor swordsman. Cook's Assistant. Company man. Nomad. Chasing the Unicorn. A performed mystery. Collector of Oddities. Merchant marine....
Base Class & Proposed Development: Whirling Nomadic Knight.
Habits/Hobbies: Enjoys a number of friendly means in which to taunt other half-bloods, such as himself. Always eager to know the value of things. Prefers to speak with the intellectually minded, and often disregards most intuitive perception as strategically weak, and brute at that.
OOC-known Guiding Characteristics: A strong individualist who values personal freedom combined with laws to govern against chaos yet only as far as they do not also restrict freedoms of good being. Feelings on governments amount to promoting governance that hold broad powers, but do not interfere in the day-to-day lives of the People. A basically "good" moral compass, that conceives law and chaos as merely tools to use in bringing life, prosperity, and happiness to all deserving creatures. Great value is put on self-reliance, but easily works within a group. Humane, respectful, merciful and protective of life, however, will only keep his word to those who are not evil and will lie only to evil-doers, and will not hesitate to bring evil-doers to justice.
Languages: Common, Elven, Illuskan, Orc, Kozakuran and more....
Weapon of Choice: His intelligence in combination with an exotic blade.

Background:
The Early Years:
Jon Smythe was born in the last years of the 13th century Dale Reckoning. He has never been sure as to what precise year, and it never bothered him, either. Progeny of a mixed heritage, he has never known the direct Elven father and family that sired him—he has, like so many of his kind, assumed it was not approved that his Llewyrr father could—and should—have had a relationship with his Ffolk mother. Smythe thought little on this—it had been many years since his mother had died, many years since he had left the island of Gwynneth, and many years since his adult life upon Mintarn.

Upon arriving in the Free Port, young Jon Smythe—who at this time was using his birth name—survived by sheer wits upon the streets. His roguish behavior required a sharp mind, quick fingers, and a bit of charm...all skills that he would continue to develop and hone. But Smythe was not selfish, nor self-serving—he carried too much of the Ffolk ways in his upbringing to carry out any acts that sung of evil, or wickedness. The keenness of mind that Smythe showed in his youthful dealings brought him into employment of a number of merchant-traders of fantastic goods. The years of dealing with fugitives from justice, pirates, war refugees, mercenaries, and others who want to transact business regarding objects and items of special worth, fueled his knowledge, and further sharpened his insight.

As time moved faster for others, Smythe retained his youthfulness among others growing settled in their ways, and with a lingering sense or need to adventure unfulfilled, he departed Mintarn for another shining port along the Sword Coast proper—Baldur's Gate. Bringing with him a few scholarly treasures in which to trade, Smythe embarked upon a business both made of tomes and tombs.

The Recent Past:
Smythe has a past grounded in Baldur's Gate: ex-bookseller, he is known by many as a tradesman, the seller of the infamous Draconomicon, and one of the few known existing spelunkers of Ulcaster's Ruins. Literal complications to his health related to the adventure in Ulcaster's Ruins, contributed to his hastily departure from the Gate, a return travel to Mintarn, where he—for whatever reason—felt better knowing no questions were asked of him, and his condition (something looking like being diseased, a certain fatigue that could be construed as plagued).

In the last few years prior to his second coming to Baldur's Gate, Smythe found refuge back in Mintarn, a certain comfort, and affording to allow him to fade into the background of Free Port, to recuperate, to heal. Whatever disease had gripped him from that fateful journey into Ulcaster's Ruins, had reduced his youthful dexterity, and where he once could easily make use of his ambidexterity in arms, he now seemed to falter when holding a second weapon.

In a fateful turn of events, Smythe came into contact with a out-of-place man, a stately warrior from lands far and foreign to the greater Moonshae—a man called Old Tam, a lone swordsman of an ancient way from far off East, now and as well, hiding from a world that he claimed only caused him shame. There was a story of great failure in Old Tam's past, but he guarded his secrets well. Whatever honor he carried could be understand to be but a shadow of what it once was. But where Old Tam showed no shame, no lack of strength, was in his excellence of swordsmanship. This skill was quickly appraised by Jon Smythe, and, through a simple arrangement of coin, Smythe submitted himself to the teachings of swordplay by Old Tam...that, and strategy for battle, using insight to overcome the enemies weaknesses. "As important as the keenest blade..." said Old Tam, and often. It was Old Tam's fighting style to combine combat insight with force of will, subjecting his opponent to not simply skill with the blade, but overwhelming the foe with knowledge, sensing an opponents attack even before they themselves make a move, and, using whatever advantage afforded, except...out-right trickery. It would become, between Old Tam and Jon Smythe, a matter of philosophical tension as to the fine line between "the advantage" and "any advantage."

Nonetheless, the sharpness in Smythe's mind led to his quick study, and before a year was complete, under Old Tam's tutelage, Smythe had gained a true focus and specialization in the katana. Toward the end of his training, Old Tam imparted upon Smythe the secrets of his past "knighthood," before his claimed shame brought him personal, emotion ruin, and before Old Tam departed his home lands to seek sanctuary in Free Port. These were alchemical secrets, such that would re-strengthen Smythe's constitution, fortify him with new toughness and eventually, a steadfast determination against failure. It was thus also a parting gift, for, soon after, Old Tam succumbed to his old age, and died...but not alone, for Smythe had earned his friendship.

Fate would continue to decide the path of Jon Smythe, and he was now reborn, so to say, and he himself took this as a sign to pick up the life he had prematurely retreated from. It was in the later part of the year 1351, that Smythe arrived again at port in Baldur's Gate.

But to those that may still walk the streets of the Gate, those that would have known a Jon Smythe from the past...the half-man would appear to have changed, in subtle ways outwardly, but...to what extent the inner being? Could it be that Smythe had, from his study and friendship with Old Tam, found that concepts such as self-discipline and honor would only suppress freedom to act, to live unrestricted by feeling, in the world? Would it be that whatever truisms, laws and order that Smythe had cultivated by example in tomes of knowledge, now seemed limiting to one's own conscious, and personal freedom? Whatever questions of attitude arose from new meetings between old acquaintances, one thing was for sure: Jon Smythe no longer expected anything from anyone. He would take up the blade in which to seek a new fortune, but he would not explain to anyone exactly where that would be found.

Smythe's last public appearances ended abruptly at the end of the year 1315 or early 1352...none could say much more, other than his last wild appearance at the Helm and Cloak tavern. Once a member of the Duke's War Council of 1351, his actions and personhood seemed to take a turn for the worse—some say towards the bottle...—after a mission undertaken in secret to new the Sharpteeth Wood, then occupied by Magmire's Army amassed to wage war against Baldur's Gate and the environs nearby. Compounded with a thieverous attack on the Helm & Cloak which afflicted his resolve and gaiety aligned with the Knights of the Unicorn that he was, finding no resolve to the mystery, Smythe seemed to simply disappear from the Sword Coast.

And with so many faces before and after him that did not speak loudly or record action in the present moment, many had simply forgotten about Jon Smythe.

And then in 1355, the half-elven "Master of the Mindful Blade" was found wash up onto shore in Ulgoth's Beard, clinging to his Bookseller's Valise, with a wildly confused look upon his face—none could say if that was from arriving from something in the recent past, or arriving to the Sword Coast...once again....

The Character Sheet determines how I role-play Jon Smythe. His Abilities and Skills determine how he perceives the world, how he can "know" things, how he can be useful, active...appropriately involved in interactions/situations.
CAED WYNTER–ROSE — Windspell Knight of the Manus Triune
PANLOS PAWFOOT — The Essential Nature of...