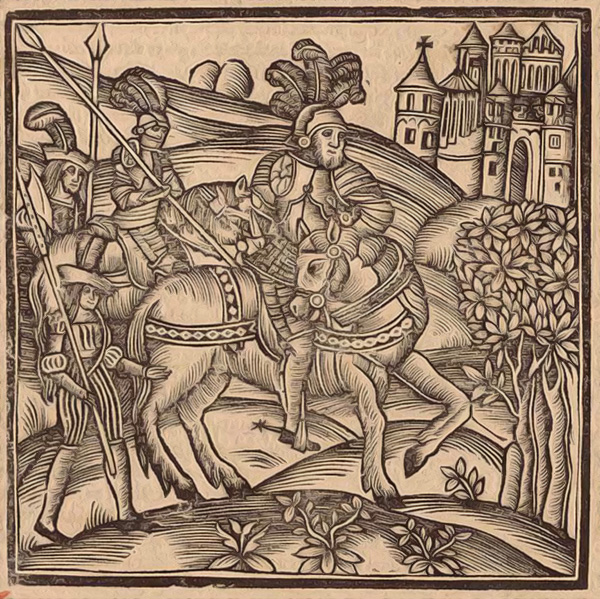 Sword of Justice ~ Knight of the Holy Judgement

"Make sharp the sword of justice with which to slay the hydra of chaos and to hew off the head of evil.”

Henryk of House Urde carries the himself as would a "holy crusader," a spiritual calling that burns in his countenance and aura of charisma embodied in a strength of personality, but equally evident in his visible physical strength, the heft in his shoulders that fill an eastern lands styled, impressive suit of mithral full plate.

His features are near-Eastern, Damaran by good guess or direct familiarity of that region (DC Lore 10), and of one of the cities of Thesk. Of moderate height, his physical build it solid, with skin color of a tawny hue. Henryk is almost always outfitted in rare, medium-weight mithral armor, giving him constant comfort and mobility, even in relaxed moments. The regional weather of the Sword Coast and especially Baldur's Gate has caused Henryk to always make use of a hood, as it appears the near constant rains give him some personal bother.

Personality Profile:
General Health: Youthful.
Deity: God of Justice.
Initial Alignment: Lawful Good
Profession: Knight-Errant of the Holy Judgement
Base Class & Proposed Development: Towards Hammers of Grimjaws
Habits/Hobbies: Seeing the world in stark contrast: unspeakable evil opposed by indomitable and uncompromising good. Has taken on the hobby of collecting poems and literary works of past honorable paladins and their great deeds. He speaks far too often in long-winded monologues that often reiterate his indomitable Faith in Justice and the power that resides in the dogma of the New Church of Tyr.
Languages: Common, Damaran and more.
Weapon of Choice: Exotic Blade, 2-handed.
Background (as it is known):
Henryk of House Urde has been sent on mission to the Sword Coast by the Head Knights of the temple The Hall of the Avenging Hammer in Telflamm, where he was ordained as a Crusader in the name of the Just God, and the order of the Knights of the Holy Judgement.

This mission was deemed fitting to Henryk's personality and general modus operandi as a knight-errant, who wished nothing more than to wander the lands of Faerun, delivering to all Peoples that with which he has been charged: "Reveal the truth, punish the guilty, right the wrong, and be always true and just in your actions."

*** a work in progress ***
Storybuilding