For the last few nights a woman has been obviously inspecting the walls around Soubar. She stood out in her red riding hood, curiously asking some of the locals about the wall it self directly. At one point, after having read from a scroll, the woman appears to talk directly to the wall. She seam to have a pleasent one way conversation to the stones discussing construction, materials and other like things.
Jane of Here and There (Jane Price)

Jennifer and A Drow.
Top

"Soubar was quiet tonight. Usually, the bustling collective of degenerates, murderers and thieves was enough to drown out even loudest of voices. Even without the constant bickering and negotiating of the local merchants and their respective customers. Tonight though, something was different. The folk here have never been the type to scare easily, after all, this is where the more hardened people in the area like to congregate. A veritable island of outcasts. Battle-hardened, Edgy, roughneck misfits all with their own goals and objectives. Which more often than not, led to the bawdy and overtop behavior most of us were accustom to in these parts. However, there is change on the wind. Hell, I've known it for some time. Having a thumb on the pulse of the flow of information allows for a certain degree of perspective. Rumors float adrift of some important documents capable of ushering a 'change' in the merchant community, some conversations spoken a bit too loudly in the wind, and a 'buzz' inside some of the more local organizations. Combine that with a sabotaged caravan and large troop movements and you've got enough tension in the air to cut it with a blade. There is much to be done. "


Inside the local tavern a few individuals deliberated the specifics of a merchant transaction gone wrong. It was a simple thing really, three colleagues having a work-related discussion over a few pints of ale. They laughed and jabbed verbally at one another all the while making the foolish assumption... that they were alone. Names, dates, times and even the existence of documentation revealing the specifics of the illegitimate contract were discussed casually, and at length. As patrons came and went they continued to elaborate on the finer points of the merchant life and took particular enjoyment in comparing the sizes of their coin purses. It was particularly amusing for me however, to watch their almost pitiful attempts at discretion. The odd hushed whisper, the collective lean and speak, it was amateur hour and they were being supervised by a professional. Sometimes more than one. Lets face it, alcohol is not the best catalyst for judgement.

There are a lot of customers that frequent this establishment and many of them are just here to have a drink. Many of them just want to unwind after a day of labor and wash their worries away with Soubar's finest spirits. Some of them are looking for companionship or even the chance to make a friend. The others however... are employed by me. Always watching, always listening and always there to lend an ear to a weary traveler. Professional as they may be, sometimes it's enjoyable just to watch them work.

The ashen haired necromancer could be seen patrolling around Soubar, her red gaze falling upon all she comes across. She would stop in at the Tavern and exchange a few words with Mags before heading back to the Ebon Blade fort.
Those that get close to her would notice her eyes seemed glazed over and that she seemed to rely heavily on her hearing as she twitched toward the slightest of sounds.
Amos Thistle - Sergeant/Knight of the Blackrose "There is a time and place for everything" (Active)

Somewhere in Soubar... a lone formless figure, wreathed in shadow stepped through the threshold of a door leading to the confines of a dark, windowless room. Silent, intent-driven eyes fixated on the faces of the two dark-clad individuals already seated in the rear. With an audible 'clack' the mans steps came to an abrupt halt, his feet resting side by side with one another and firmly planted on the wooden planks beneath him. This was as much a statement as it was intentional. The Overseer's steps were "always" deliberate and nearly impossible to detect at any given time. This time however, a single step was enough to dispel any question or confusion as to whether or not this was a social visit. With a gentle sway, the imposing mans cloak surrounded his body creating the silhouette of a large, featureless outline on the door frame behind him. A moment of silence lingered on for a few moments before the hushed tone of an insistent and clear statement was given. The voice gruff and low. "I expect that your contacts... "my" contacts..." He corrected, as if to place emphasis on his control of both the situation and the men he was speaking to, "have acquired the information I requested. You have until tomorrow night to ensure you collect it and present it to me. I will return then." Another unnaturally eerie silence filled the room for a few moments and then, without a single word, the hooded man turned on his heel and proceeded silently out from which he came. A few moments later a whisper, seemingly originating from behind the two men, delicately kissed the wind in a flat, unforgiving tone. "Do not... disappoint me."
Top

In and around Soubar poster are being hung up by what seem to be some of the poorer populace. The Parchment is warded by a glowing Sigil and reads as follows:

((Feel free to PM me here on the forums or in game, looking forward to the resulting RP

In Soubar two figures, an astute adventurer would recognize as Lady Netanya and Arturi Valdaska, are sighted outside the Ebon Blades Keep with Morgan Blackrose discussing the status of Carah Evenwood of House Darius who was allegedly being held inside the Keep. After Morgan seemed to acquiesce to Netanya's request to speak with Carah, both Netanya and Arturi were seen hastily departing Soubar, as they awaited Morgan's return, without having the occasion to speak with Carah.
Last edited by Heretic on Wed Dec 25, 2019 6:53 pm, edited 1 time in total.
Lady Netanya - Redefining Fabulous
Councilor, Phoenix Company
Top

Rumors are spread of a shipment of dwarven goods containing gold and gems.
No information is available as to where and when this caravan is to be expected. 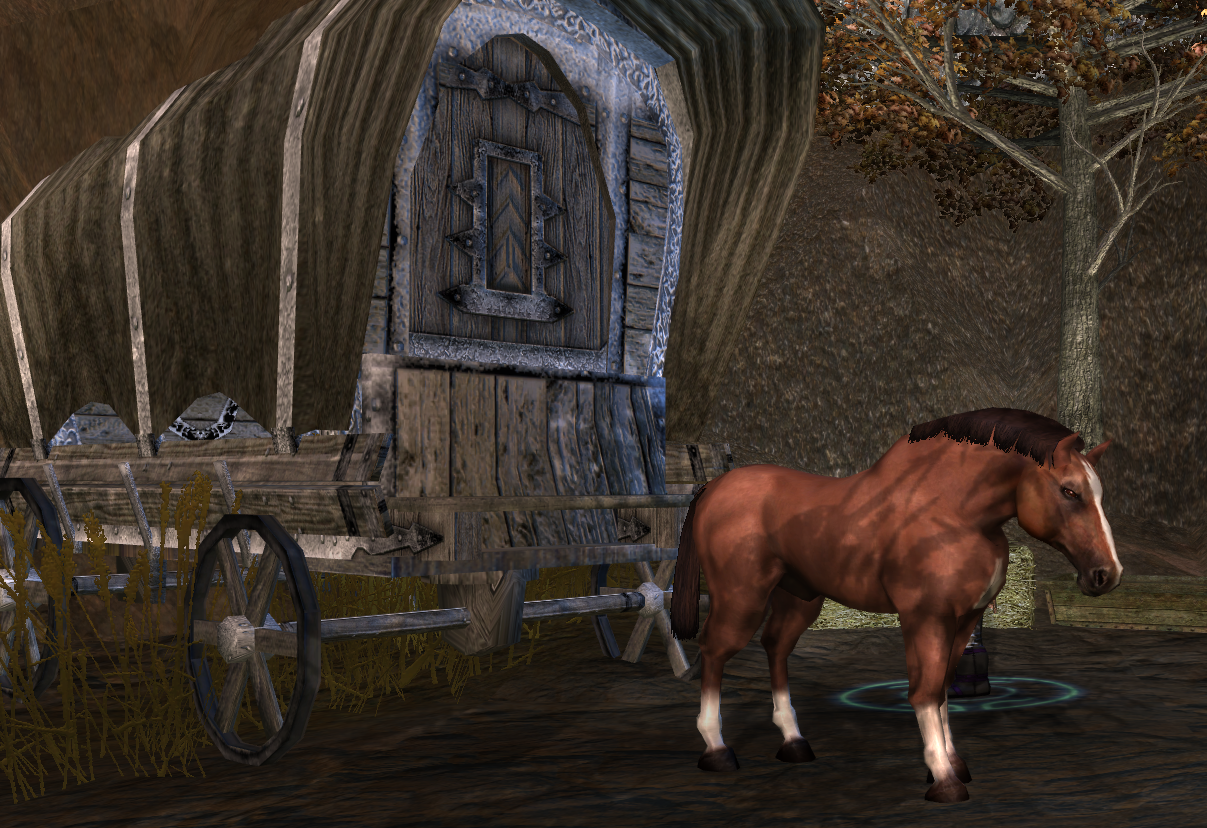 Hakken2 wrote: ↑
Sun Jan 05, 2020 6:24 pm
Rumors are spread of a shipment of dwarven goods containing gold and gems.
No information is available as to where and when this caravan is to be expected.

The knight known as Ser Thistle upon hearing of the Dwarven caravan would could be seen asking around Soubar looking for the Bhor or any others from Kraak.
Amos Thistle - Sergeant/Knight of the Blackrose "There is a time and place for everything" (Active)

The Ashen haired woman known as Morgan has not been seen returning to the halls of the Ebon Blades since her departure south to investigate the Ulcaster ruins.
Amos Thistle - Sergeant/Knight of the Blackrose "There is a time and place for everything" (Active)

An iron clad male would have been seen by the locals hanging up a notice at the bulletin board in Soubar. 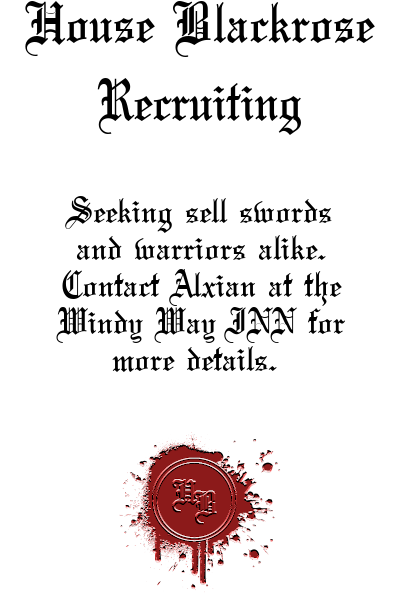 Since early in the day, a figure in distinctive armor is seen under Soubar, shoveling debris out of the way, killling whatever vermin stands in the formerly hallowed grounds. Visitors would be thanked for the help in slaughtering those who defile the Tyrant Lord temple. 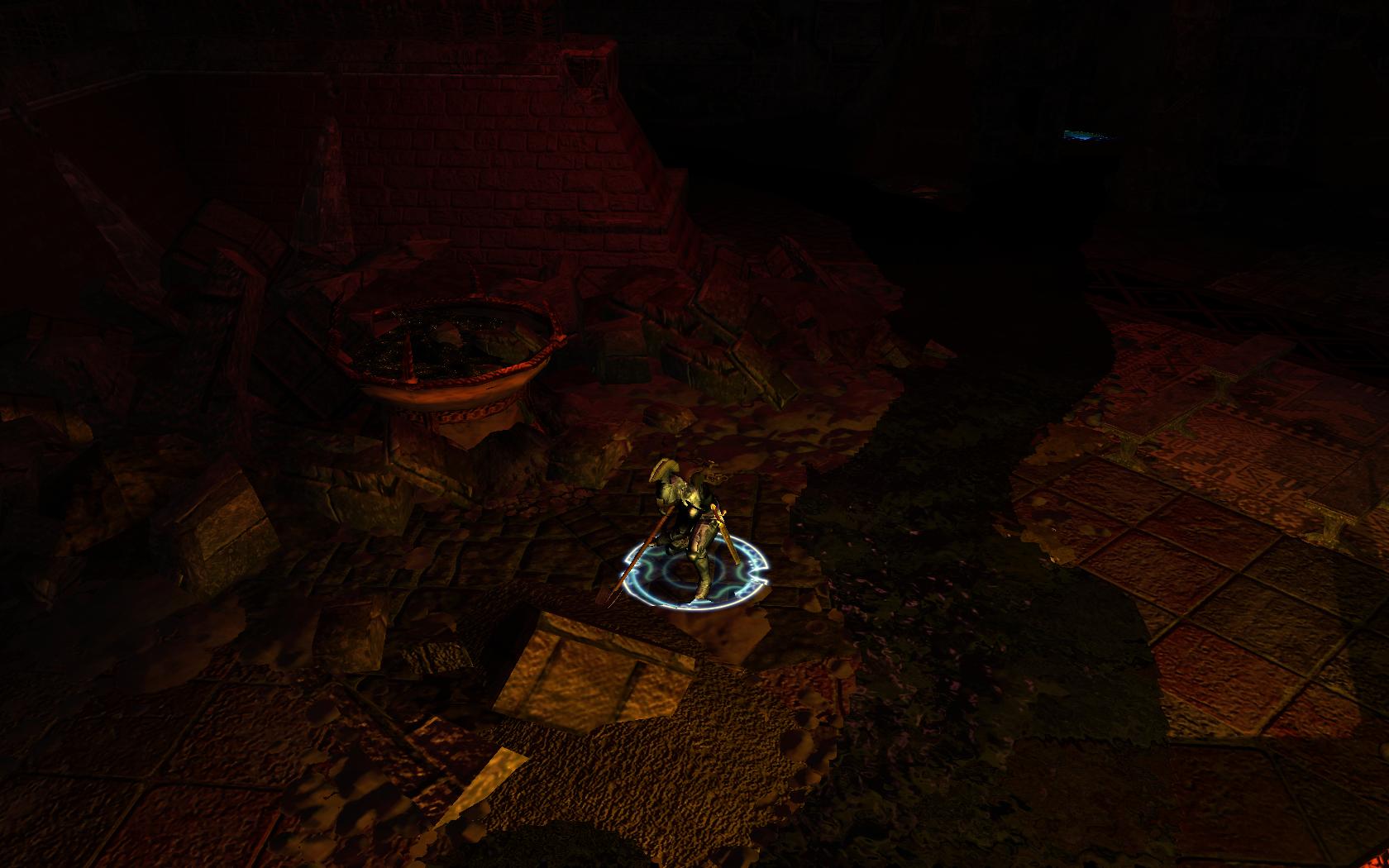 Lotrik: Not a wise Genasi, probably stronger than you tho, a master of longswords. Not guilty of any crimes. Semi-retired

The same iron clad male would have been seen taking down his old posters, perhaps hinting that he is clean up the now irrelevant.


Azroth wrote: ↑
Thu Jan 09, 2020 4:34 pm
An iron clad male would have been seen by the locals hanging up a notice at the bulletin board in Soubar.

A robed, cowled figure wandered into Soubar recently followed by a large earth elemental dragging a cart.
He spoke elven poorly despite claims of being teu-tel-quessir and set up a stall selling overpriced boots.

...After several hours with no sales he packed up shop.

Before departing from Soubar the elf wandered over to a local fletcher, where, if the rumors are true, a deal was negotiated involving tens of thousands of elemental arrows and an astonishing amount of gold.
Top

The Knight-Commander of Darkhold has been seen coming back from Baldurs Gate, instead of heading to the caravan and back to the Hold, he spends most of his day in the ruins below the Winding Way, slaughtering the vermin that dare spoil the hallowed grounds. When no such vermin is present, the Dread Knight removes rubble from the grounds of the Black Abbey.
Lotrik: Not a wise Genasi, probably stronger than you tho, a master of longswords. Not guilty of any crimes. Semi-retired